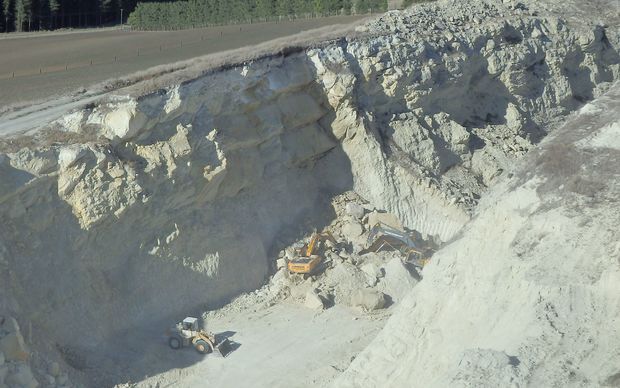 Murray Taylor was buried when part of a cliff collapsed at the Heathstock Haulage lime quarry in June. Photo: Westpac Rescue

At least two of the men killed, died at unregistered work places.

The health and safety council for the mining and quarry sector said it was a bad year for fatalities.

It is aware of about 500 registered quarries.

WorkSafe figures released to RNZ said there could be up to 1200 sites nationwide which could meet the legal definition of a quarry or alluvial mine.

The owner of the Heathstock Haulage lime quarry near Waikari, Murray Taylor, who died when he was buried by a rockfall in June, did not hold a certificate of competence for the quarry.

Chris Baker, who is the chair of the mining extractives sector Health and Safety Council, said Mr Taylor's death at the site was avoidable.

"You know any casual observer would say, that [the site] looks dangerous, and that's the way it played out.

"That's certainly an extreme example of a practice that with better knowledge, I think Murray would still be alive," he said.

The other deaths included Scott Baldwin, who was 43 and died at Gordons Valley Lime Company, near Waimate, in March.

Tane Hill-Ormsby, who was 25, died after a 45-tonne rock cutter rolled at Oropi Quarry in Tauranga, while last month at Southland's Waikaia mine 30-year-old Mario Lelina was killed while operating earth-moving machinery at the alluvial goldmine.

WorkSafe introduced new regulations in January, which gave quarries a year to register with the health and safety regulator, and update their safety standards.