Victoria Crone, Phil Goff and Mark Thomas have all launched bids for the Auckland mayoralty, and in a video interview for RNZ's Outspoken, Auckland reporter Todd Niall asks them about their vision of the future. 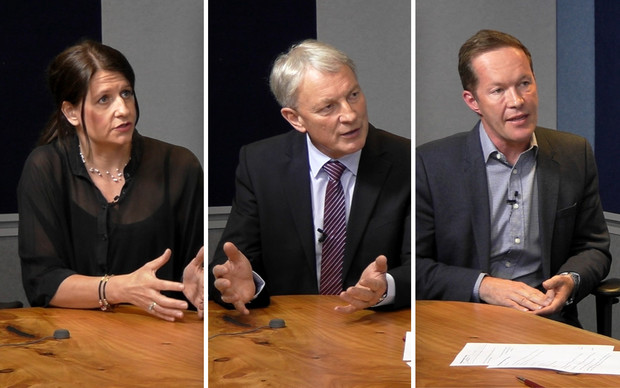 Phil Goff launched his mayoral bid in November and, if successful, will resign from Parliament where he served 31 of the past 34 years as the Labour MP for Mount Roskill. Todd Niall asked Mr Goff how he would make a difference to the city's challenges of Transport, Housing and Finances:

Mark Thomas hopes to step up to the mayoralty from being on the council's Orakei Local Board, with policies focused on community needs. His other highest political profile was in 1996 when he stood unsuccessfully for National In Wellington Central. In this interview, Mr Thomas is asked what he had learned from months of going to community meetings.

Victoria Crone confirmed her bid for the mayoralty in December, resigning her role as the managing director of the New Zealand operations of software company Xero. Ms Crone told Todd Niall that quitting business for politics was a deliberate choice: