A forest fire raging in Marlborough has become so dangerous ground crews have had to pull out. 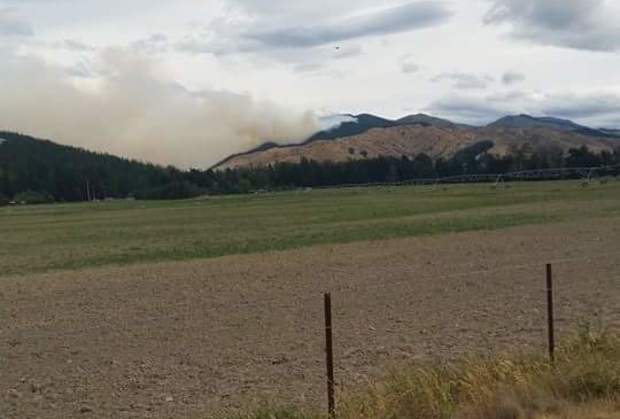 The fire is burning across steep terrain in the Wairau Valley. Photo: SUPPLIED / Raewyn Robertson

About 40 rural fire officers and the crew of 10 helicopters are trying to control the fire in the Wairau Valley, which is burning steadily up across steep terrain, fanned by light winds.

The blaze started this afternoon in a commercial pine forest plantation belonging to Nelson Forests, a few kilometres to the south of the valley's township.

Principal Rural Fire Officer Richard McNamara told Checkpoint no homes were under threat and farmers have been moving any grazing stock out of the path of the fire's 1km-wide front.

He said it was a case of taking up positions and preparing to battle the flames once conditions improved in the morning.

"One of the problems we've got is the site is reasonably dry, there's not that many water sources. We're having to comandeer a lot of heavy tankers, water tankers," he said.

"We're putting everything into it in terms of gear and equipment but there's only so much you can do when you're dealing with the energies and a fire such as this."

Mr McNamara said the fire had burned through 100 hectares of pine trees so far.

Canvastown chief rural fire officer Denis Marfell said ground crews had been pulled out because it was too dangerous.

"It's just too dangerous to put ground crews in there at the moment; we'll have to wait until they get a little bit of control on it."

Further support has been called in from Canterbury, West Coast and Nelson.

Today's blaze comes just two weeks after a large pine plantation fire in Marlborough's Waikakaho Valley, which also began in an area where forestry production was under way.