A court has heard that Davender Singh made his wife record her conversations at work for weeks, to try to prevent her from having any contact with her lover at work. 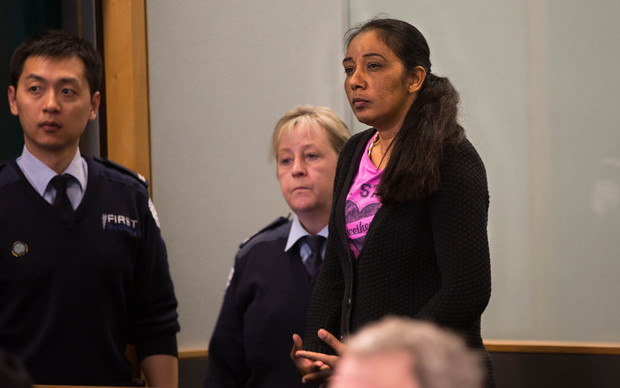 Amandeep Kaur standing in the dock at the High Court in Auckland. Photo: RNZ / Claire Eastham-Farrelly

Under cross examination by her lawyer, Ms Kaur said in the days after her husband found out about her affair, she became aware he had put a recording device in her lunchbox so he could play back the conversations she had at work.

She said she was ordered to keep the recorder on while at work from 14 July until 5 August, and told if she didn't she would be beaten.

Ms Kaur also denied trying to get another colleague sacked after finding out he was reporting back to her husband about what she was doing at work.

Davender Singh was found dead in his car in Papatoetoe in August 2014.

Yesterday, Ms Kaur said she pulled out of the planned murder and ended her affair with Gurjinder Singh, the day before the killing.