An Environment Protection Authority (EPA) hearing is deciding whether a new crop pesticide, which could be harmful to bees, can be used in New Zealand. 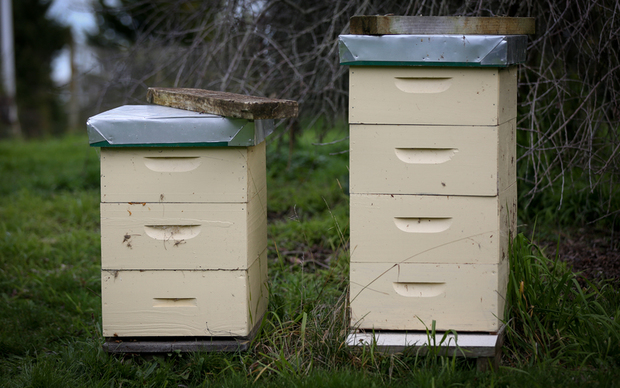 In a submission to the EPA, the National Association of Beekeepers said no agency was collecting data on pesticide use by volume and crop in New Zealand.

It said New Zealanders had no idea how much pesticide was being released into the environment, and there were at least two bee dead-zones caused by long-term pesticide use.

The beekeepers' submission is one of 19 before the EPA on an application by Bayer to import a new formulation of the neonicotinoid clothianidin.

Clothianidin has been used on maize crops here since 2003, and Bayer said its product Ponch Votivo had lower levels of active ingredient than the version now on the market.

But the beekeepers said it was banned in Europe and Bayer was facing lawsuits in Canada over beehive deaths from the pesticide.

The EPA is hearing submissions on Bayer's application in Wellington this morning.

National Association of Beekeepers spokesperson Don MacLeod asked Bayer if it intended to research the effects of the new pesticide in New Zealand.

But Bayer said it mainly relied on a variety of international studies.

Asked how the pesticide could contaminate pollen, Bayer said pollen might have traces of the pesticide but less than the level it identified as safe.

The company has been asked to seek approval for its clothianidin reformulation because it includes Bacillus firmus - a non-pathogenic soil organism.

It said this made the product more effective, allowing the manufacturer to reduce the amount of active ingredient and so less clothianidin would be used overall.

But the beekeepers' group said the pesticide was now off-patent, and it was likely other manufacturers now used it - potentially increasing its use.

Federated Farmers has taken a neutral position on the matter.

In its submission, it said it welcomed a new treatment to suppress nematodes in cereals, maize, sweetcorn, forage brassicas and grass seed. Clothianidin was better for the environment than traditional organophosphate treatments, it said.

But it said it was concerned Bayer had made little reference to honeybees in the material it had provided to the EPA and clothianidin's effect on pollinators.

Federated Farmers said the European Food Safety Authority and the US Environmental Protection Authority identifed clothianidin as highly toxic to bees on a contact and oral basis.

It said there was uncertainty about the pollen and nectar uptake by bees from flowering crops treated with the pesticide.

The group's membership was worried about the use of Poncho Votivo as a seed treatment on forage brassicas, which may remain uneaten then flower in spring when bees are hungry.

It said Bayer should be directed to clearly state the potential effect on pollinators.

The remainder of the 29 submissions to the EPA are from individuals and organisations strongly opposed to the use of neonicotinoids, and the registration of Poncho Votivo.