Two activists were arrested earlier today but three others had remained secured high on the ship's superstructure, rebuffing police attempts to talk them down.

The group said they were protesting the use of the National Institute of Water and Atmospheric Research (NIWA) ship in a survey for oil off the East Coast of the North Island.

The remaining three protesters were arrested about 7pm, Greenpeace said.

The environmental group's climate campaigner Steve Abel said the research was another example of the government's obsession with oil.

"This is a government-owned ship that's researching oil for the New Zealand oil industry, when it should be doing vital climate and oceanic research.

"The oil it's searching for is that exact oil we need to leave in the ground if we're going to avoid catastrophic climate change." 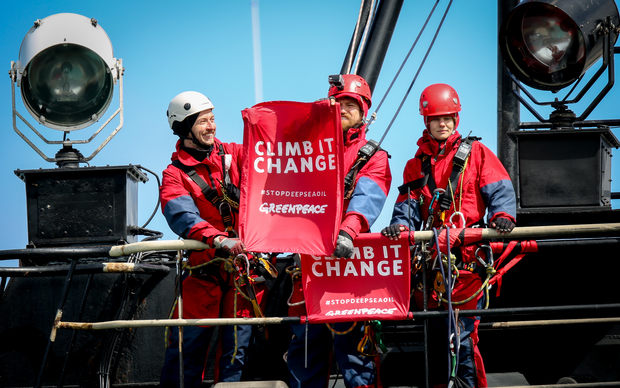 But Minister of Science and Innovation Steven Joyce was contemptuous of the protest action.

"I just think it's attention-seeking behaviour. Everybody knows what Greenpeace's view is of oil, and that's fine, but to pick today and to say that shock, horror, that somehow this thing's all new, is disingenuous in the extreme."

He said assisting with minerals and petroleum earned money for other scientific research.

NIWA said in a statement it was disappointed and concerned about the protest on its vessel. 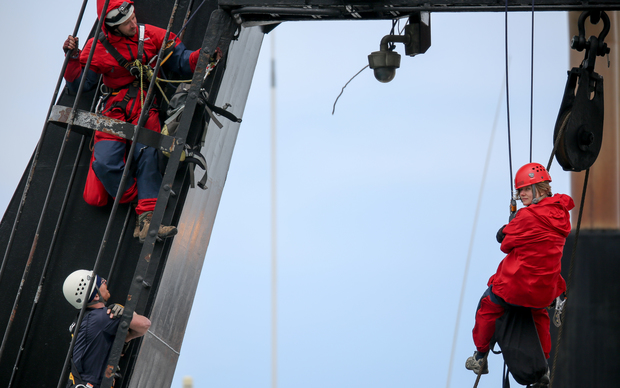 A police officer (bottom left) talks to activists on board the ship. Photo: RNZ / Alexander Robertson

The Tangaroa, which is New Zealand's only deepwater research vessel, is used by NIWA in the South Pacific, Southern Ocean and Antarctica. On recent voyages, it has studied orange roughy, mapped the seabed off Otago and carried out a a Chatham Rise trawl survey.

On its website, NIWA said the Tangaroa had had a $24 million upgrade to enhance its ocean science, oil and gas exploration, and marine engineering capabilities.

The ship was capable both of mapping the ocean floor and taking core samples of material.

The institute did a lot of work on the marine environment as well as minerals and petroleum research, its statement said.

The protesters were putting themselves and others at risk, it said, and the matter was now one for the police to handle. 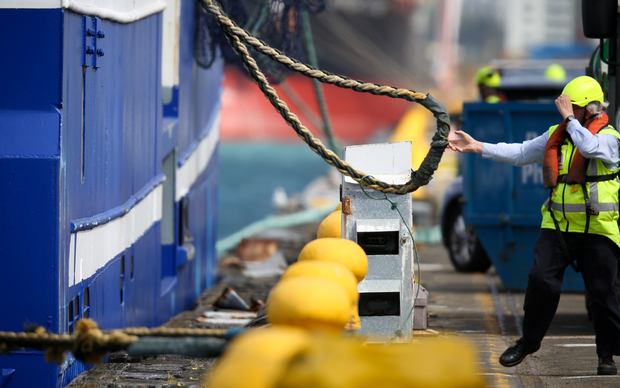 NIWA's Tangaroa moves 50m down the wharf with the three remaining protesters on board following the initial two arrests. Photo: RNZ / Alexander Robertson 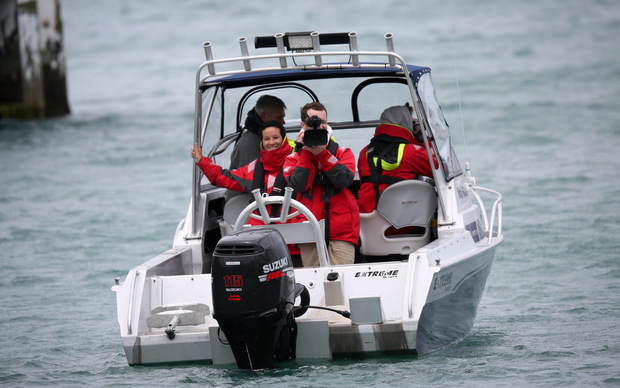 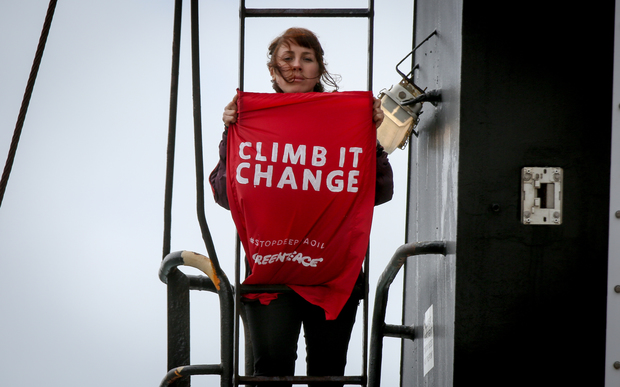 One of the Greenpeace activists on board the ship. Photo: RNZ / Alexander Robertson 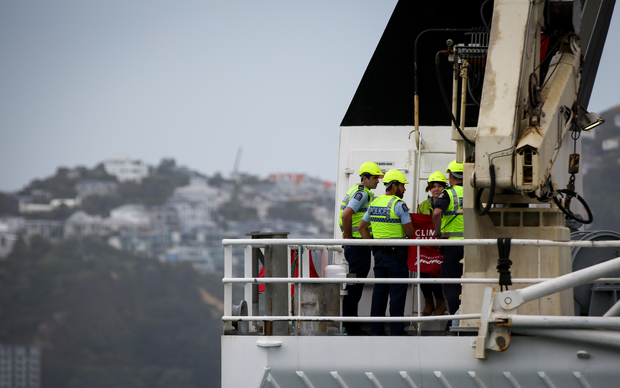 Police arrested two of the protesters earlier today and the other three this evening. Photo: RNZ / Alexander Robertson 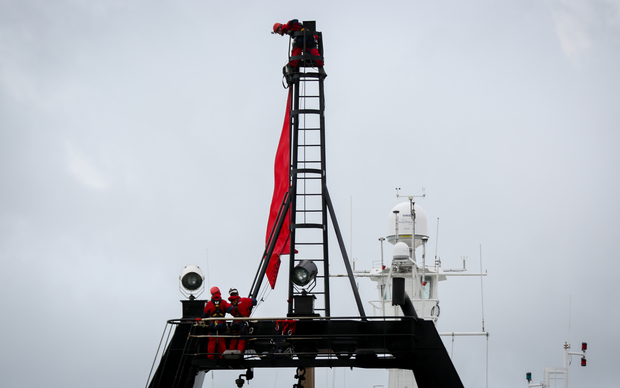 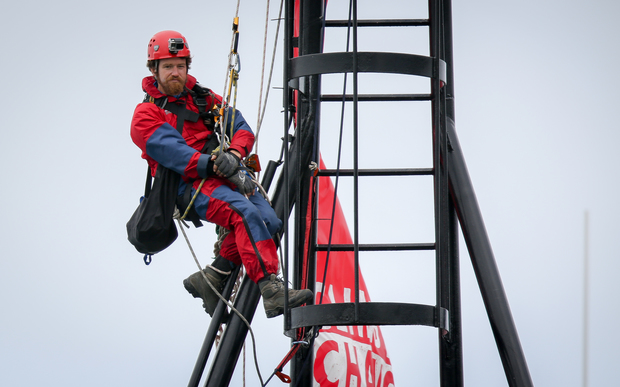 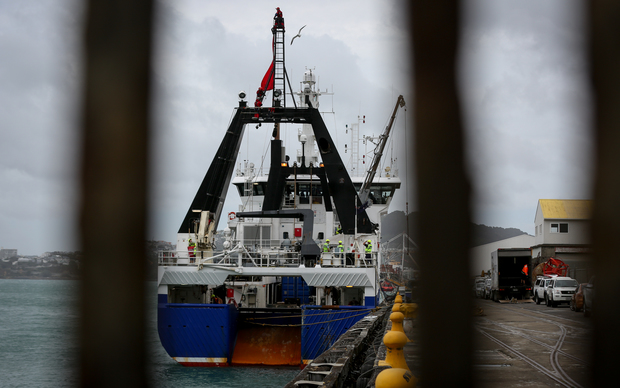 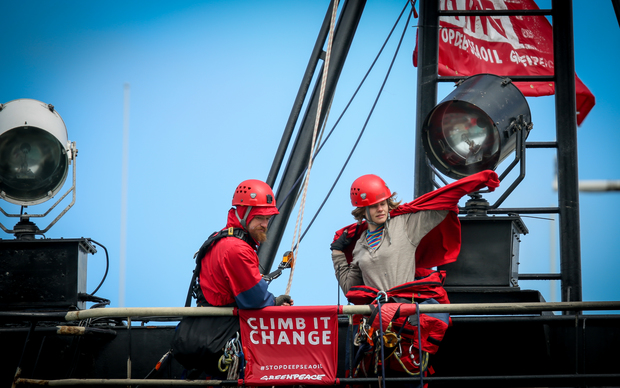