The day-long protest on the roof of Parliament is over after the four Greenpeace protesters climbed down the front of the building where they were met by police. 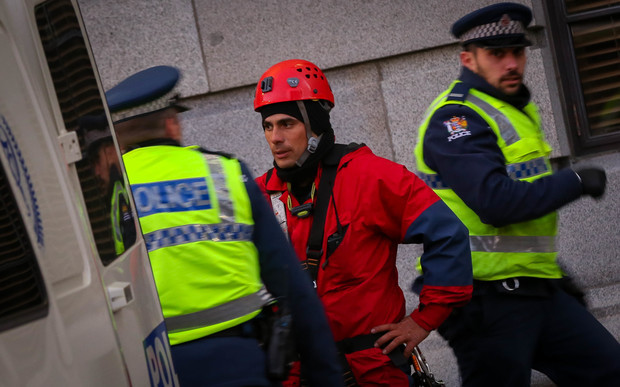 The last protester being taken into custody. Photo RNZ/Alexander Robinson. 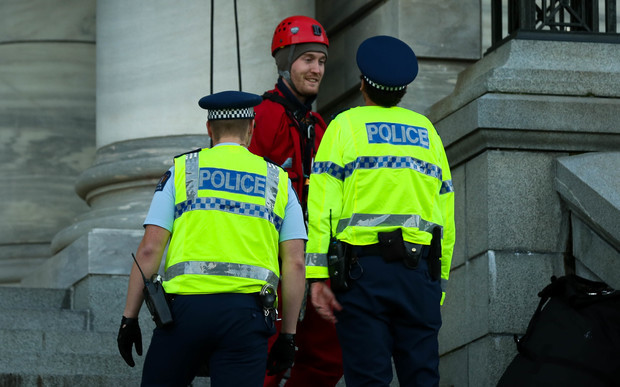 Protester being taken into custody by police. Photo RNZ/Alexander Robinson 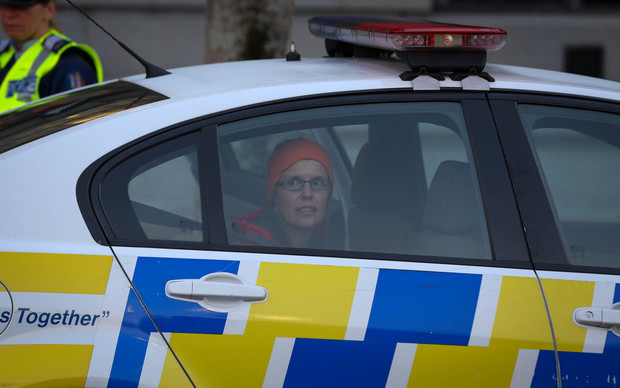 One of the protesters is taken away by police. Photo RNZ/Alexander Robertson. 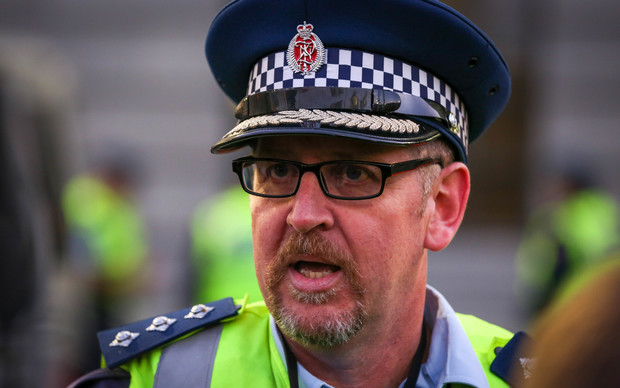 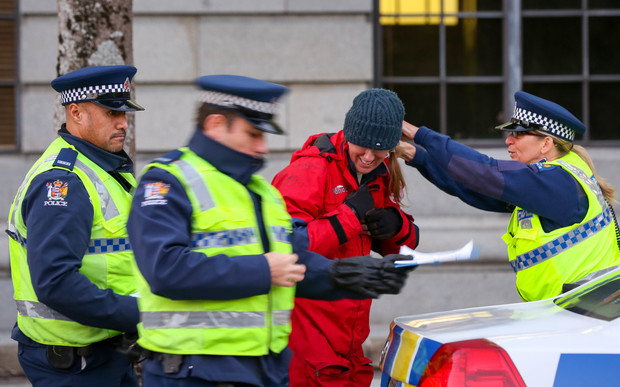 A Greenpeace protester being taken into custody. Photo RNZ/Alexander Robinson. 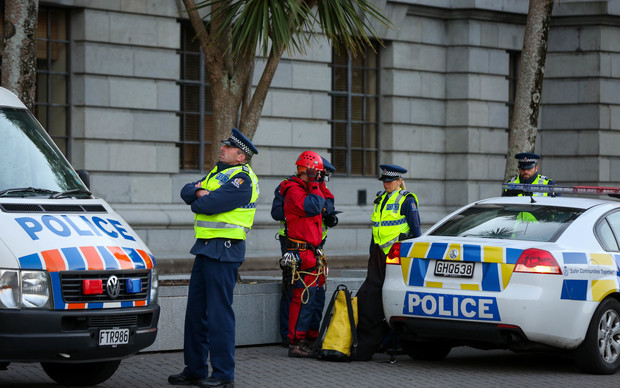 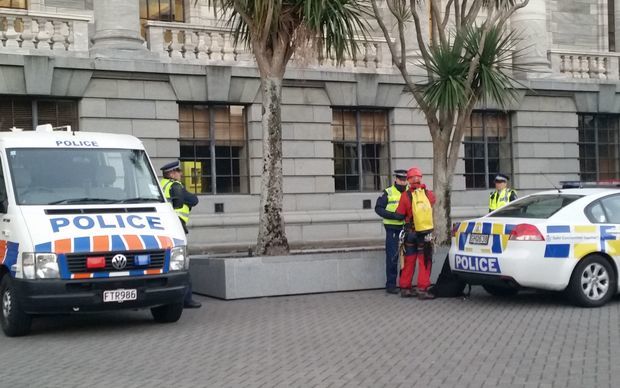 A climate change protester is spoken to by police. Photo RNZ/Shannon Gillies. 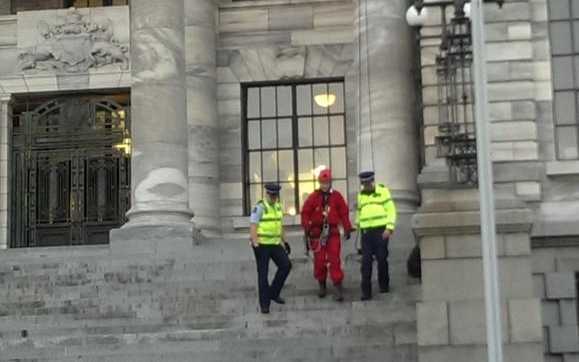 A protestor is escorted down the steps of parliament by police. Photo RNZ. 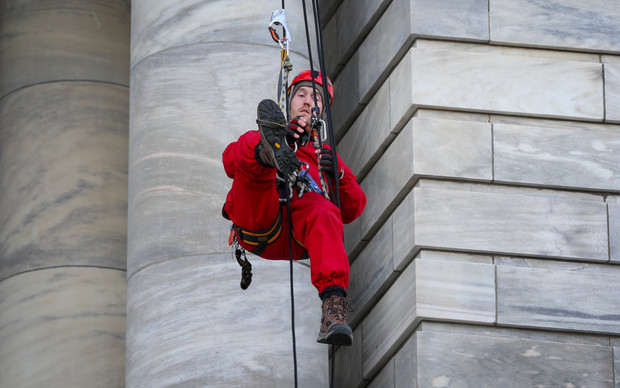 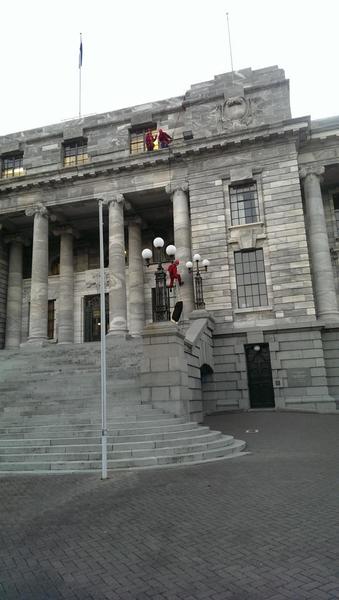 Banner and one man down. Photo RNZ/Jane Patterson. 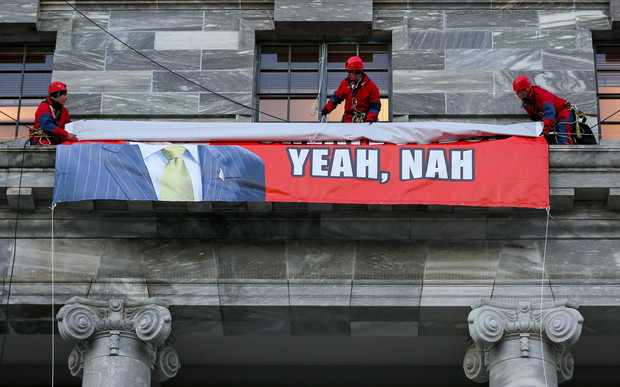 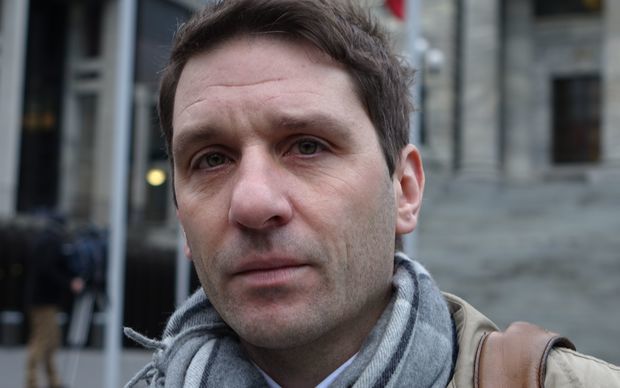 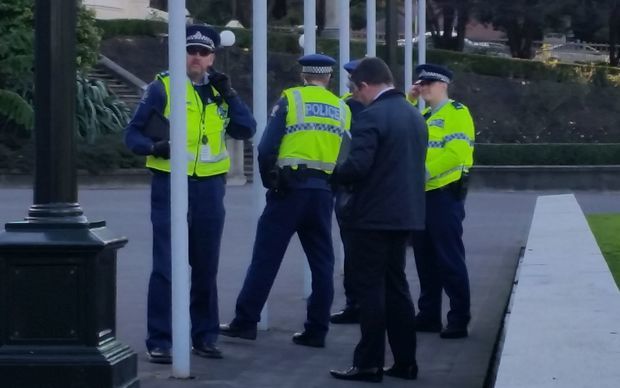 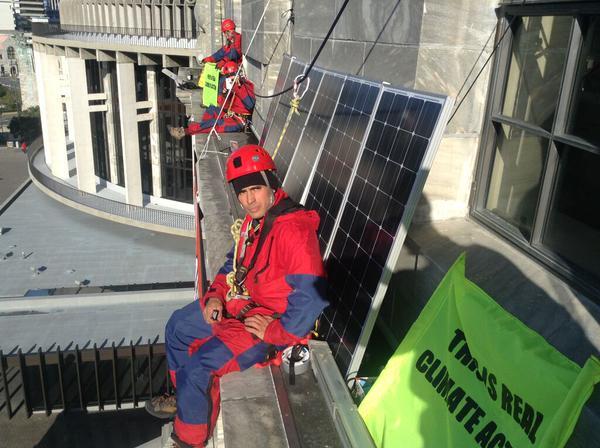 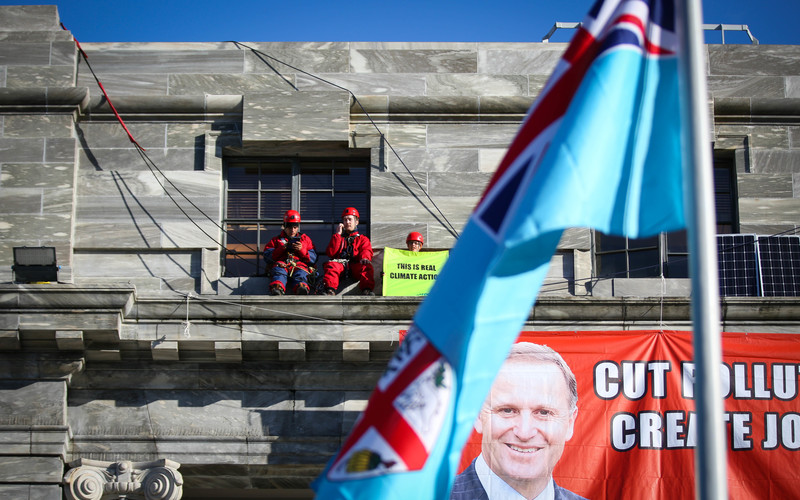 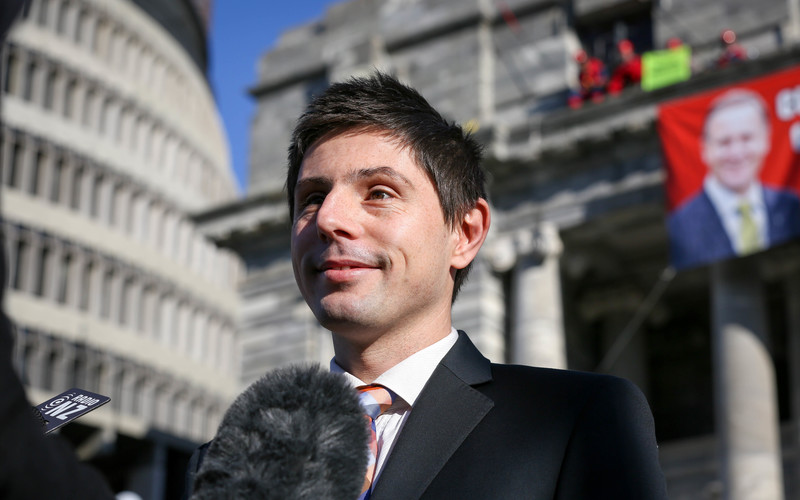 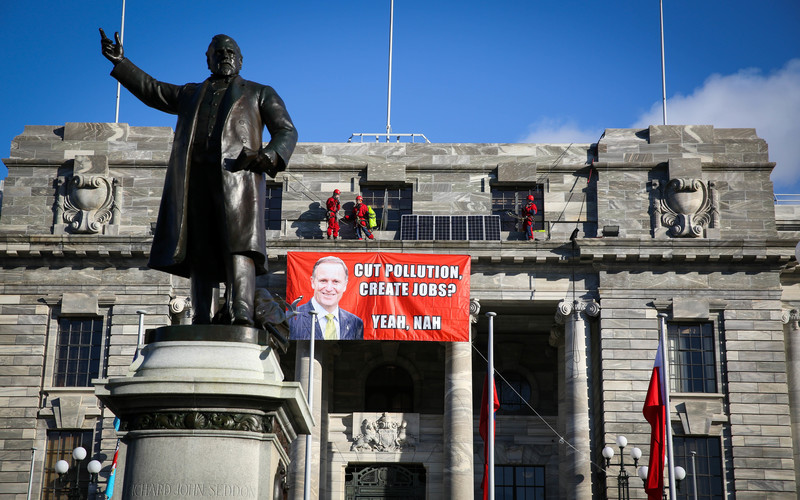 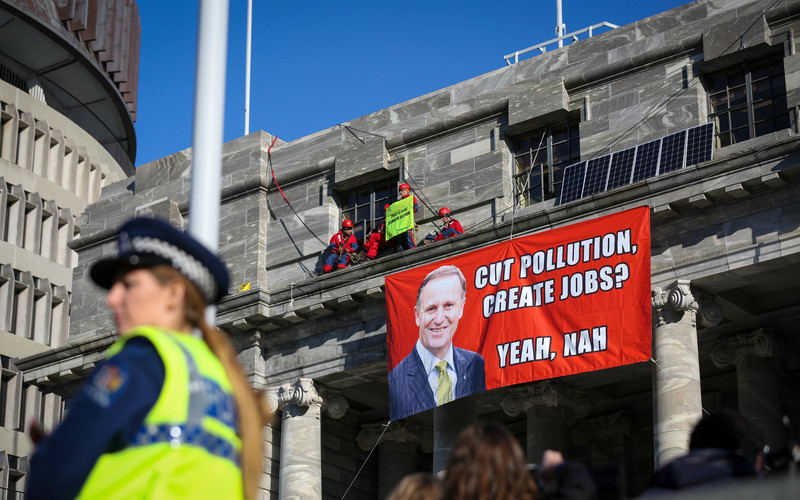 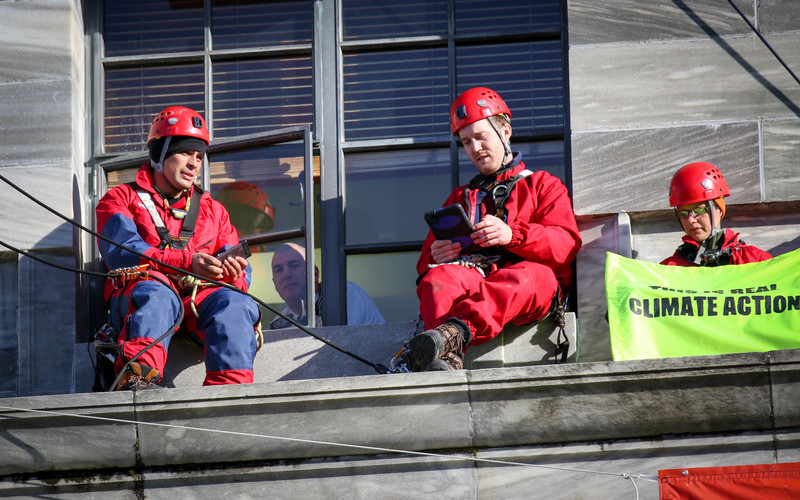 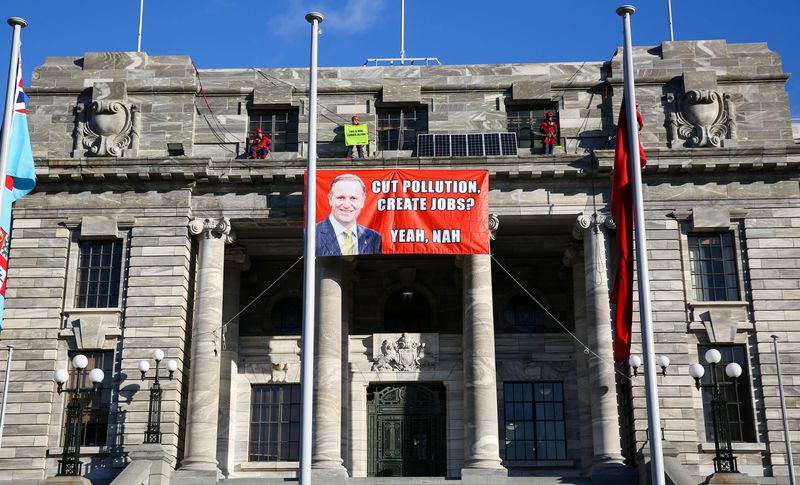 Four protesters got onto the roof, placed solar panels on a ledge and unfurled a banner. Photo: RNZ/ Alexander Robertson 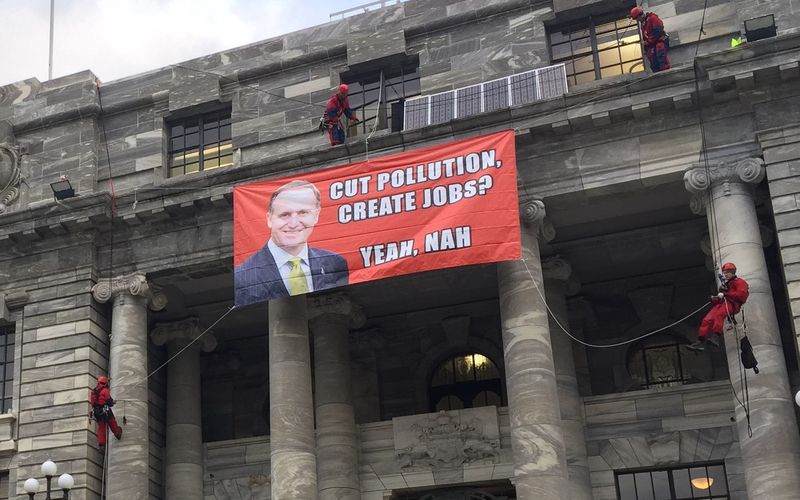 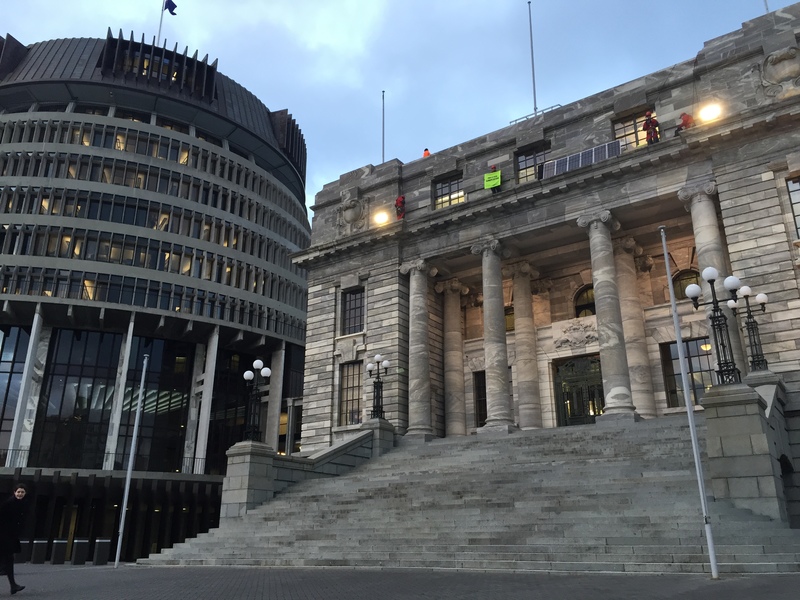 The crowd cheered as they came down of their own accord about 5pm tonight. The police escorted them into a waiting paddy wagon. Our reporter at parliament Jane Patterson described the arrest as civil and polite.

The police have charged each protester with trespass.

Look back at our live coverage

Coming down. To a couple of police, a bunch of media, and lots of supporters. Greenpeace at Parliament #climate pic.twitter.com/qjNDzBStlR

Greenpeace said the Government was simply not doing enough on climate change and should be doing a lot more.

"People have been lobbying the Government and we aren't really getting anywhere. There's no clear solution. Our system's still based on fossil fuels.

"Obviously we can see we're having extreme weather events every year. 100 year floods are happening all the time, as you can see in the lower North Island just above where we are now. Then worldwide you can see heat waves in California and in the Middle East killing hundreds of people at the moment."

The organisation's policy adviser Nathan Argent said this morning's protest was "borne out of frustration" at the Government's continued inaction.

"My job is to speak to the Prime Minister about real climate change action and it's [the message is] simply not getting through," he said.

"The government has failed to put any policies in place to stop pollution."

"Now we are looking at a situation where New Zealand's emissions are spiralling out of control." 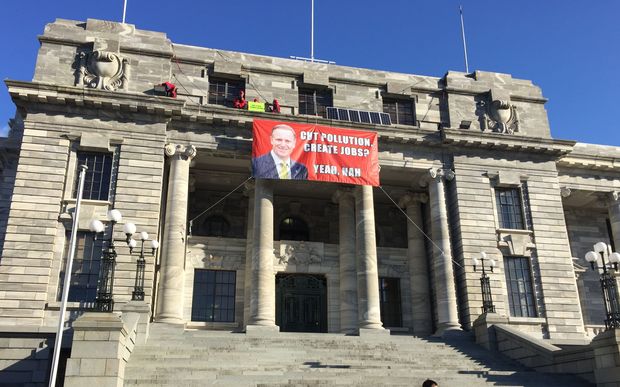 Solar panels soak up the sun as the protesters settle in for the day. Photo: RNZ/ Daniela Maoate-Cox 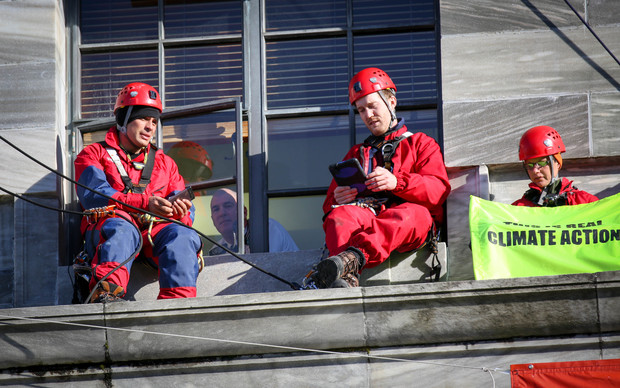 Mr Argent said that inaction on climate change was not only hurting the environment but the economy.

He said the government was aware of this as a Briefing for Incoming Ministers in 2014 warned of the economic cost of ignoring climate change. "[The briefing said] If it didn't put in place a plan to officially tackle climate change it could cost the economy $52 billion."

The ease with which the protesters managed to get onto the old parliament building has raised worries about security at Parliament.

General Manager of Parliamentary Service David Stevenson said the protesters would not be removed but left to come down of their own accord, for safety reasons.

He said a full review of parliamentary security will be carried out as a result of this morning's protest.

Mr Stevenson said while Parliament is frequently a focus for protest, the Greenpeace activists had trespassed and their actions were totally inappropriate.

He said Parliamentary Service was taking the situation very seriously and would be looking to take lessons from it, with a view to tightening security procedures.

The Prime Minister's office released the following statement regarding the protest:

"People always have the right to peaceful protest and are free to do so, as long as they don't break the law or put anyone in harm's way.

"Security is an issue for Parliamentary Services and for police and both are dealing with the matter." 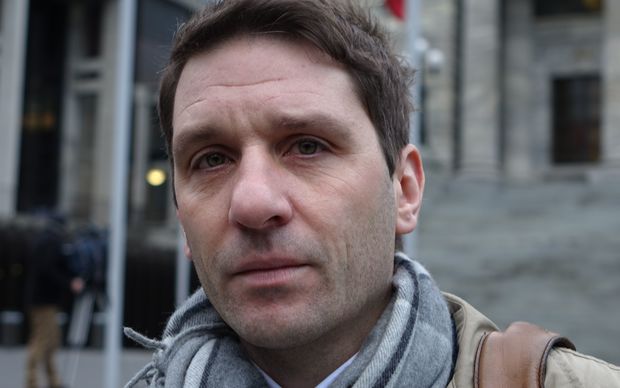 Support and praise from politicians

The protesters garnered both support and criticism from politicians this morning.

Green Party co-leader Metiria Turei tweeted that the protest was "a sight to see".

What a sight to see at work this morning "This is real climate action# pic.twitter.com/WOI8R8LfRg

She said the protesters reflect the view of thousands of New Zealanders, but the ease with which they got on the roof raises serious security concerns. 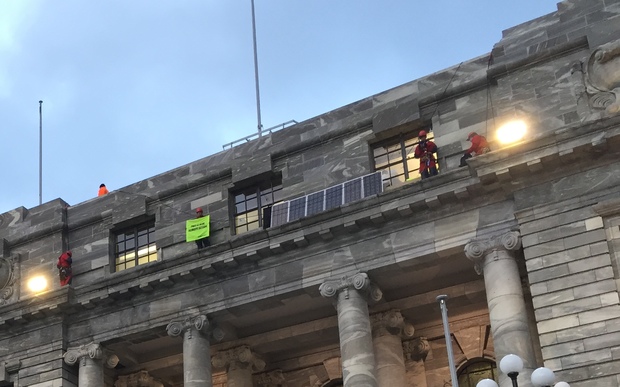 Because in 2007, Key called climate change “the biggest environmental challenge of our time,” yet has failed to act. #realclimateaction now!

National MP Judith Collins, however, said that Greenpeace should have considered how their actions would affect others.

"It would be awful if any parliamentary security person lost their job because of Greenpeace's trespass. I wonder if GP considered that?"

The public's reaction was similarly polarised.

Twitter user Ben Bell said the solution to the protest was to "cut their ropes and leave them on the roof of Parliament House overnight," while a more sympathetic user, Rosalee Jenkin, echoed Greenpeace's calls for change, saying "govt climate policy still even worse than their security measures."