The Environmental Defence Society (EDS) has reiterated its call to create a climate forum to tackle issues such as rising sea levels. 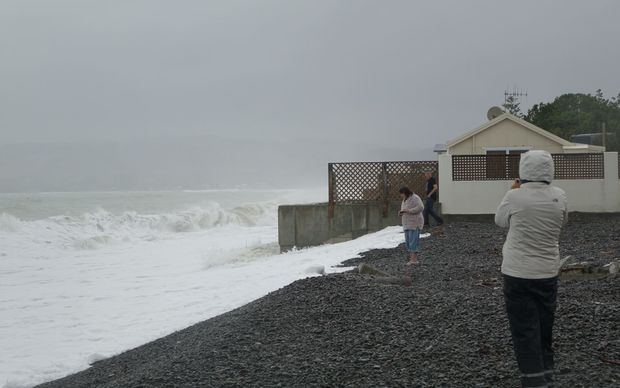 Locals say during a bad storm the waves go over the top of this house in Haumoana Photo: RNZ / Peter Fowler

It follows the release of a report that revealed at least 9000 homes throughout the country are low-lying and potentially at risk.

The report, from Parliamentary Commissioner for the Environment Jan Wright, says it is certain that the sea level is rising and it will continue to do so for centuries to come.

Dr Wright described the impact of rising sea levels on communities as being like a "like a slowly unfolding red zone".

EDS chair Gary Taylor said the nation needed to have a joined-up conversation about how the country responds to the imminent threat.

"This is a big issue for New Zealand, we have a very long coastline - somewhere in the order of 18,000 kilometres - a lot of houses that are currently built at risk, and as we're building new settlements we need to futureproof them against sea level rise as well."

The idea of a climate forum was put forward by the society at its climate change conference last month.

Although the main aim of the conference was to address climate change mitigation issues, it was agreed it could be expanded to discuss the country's response to climate change.

Mr Taylor said the idea of a climate forum involving all key stakeholders - similar to the existing Land and Water Forum - was welcomed by delegates.

The society also suggested the Land and Water Forum could be expanded to explore ways of meeting the rising sea level challenge.

Mr Taylor said the Ministry for the Environment is considering how a climate forum might happen. He had had several discussions with potential key participants and that conversation was making progress, he said.

Business New Zealand, Federated Farmers, the insurance and finance sectors were among the stakeholders that would be involved in a forum.