The royal couple have had a busy day, meeting the Maori King in Waikato, greeting fans in Auckland and spending the evening promoting the prince's charities. 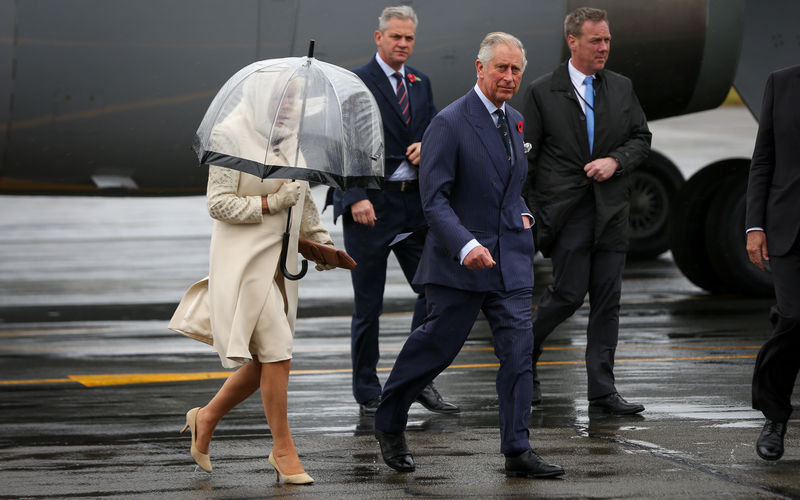 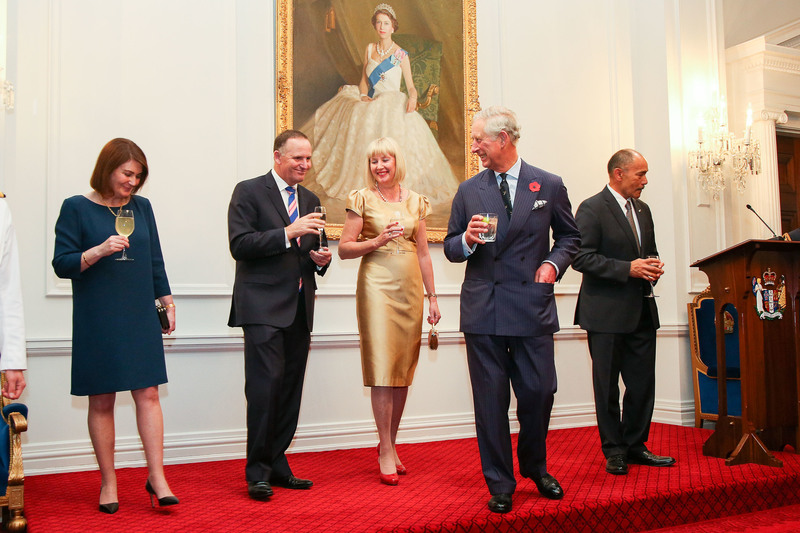 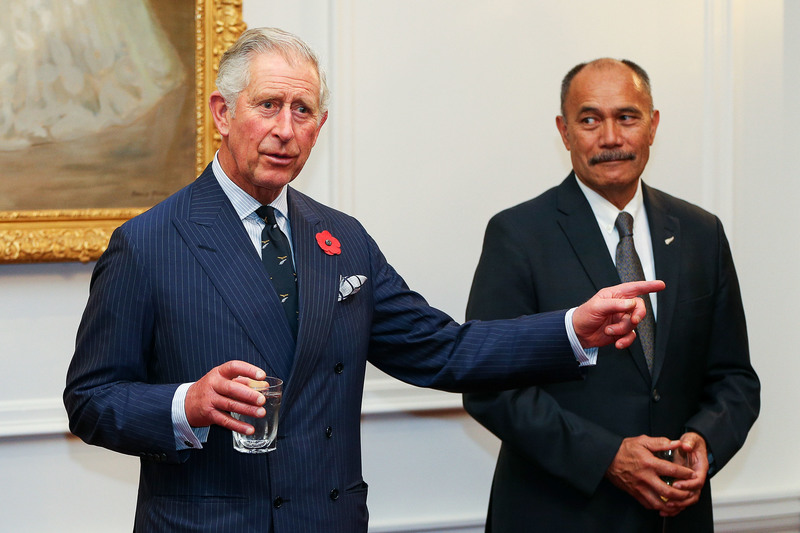 Prince Charles and Governor-General Sir Jerry Mateparae at a state reception at Government House in Wellington on the evening of 11 November 2015. Photo: POOL / Getty Images 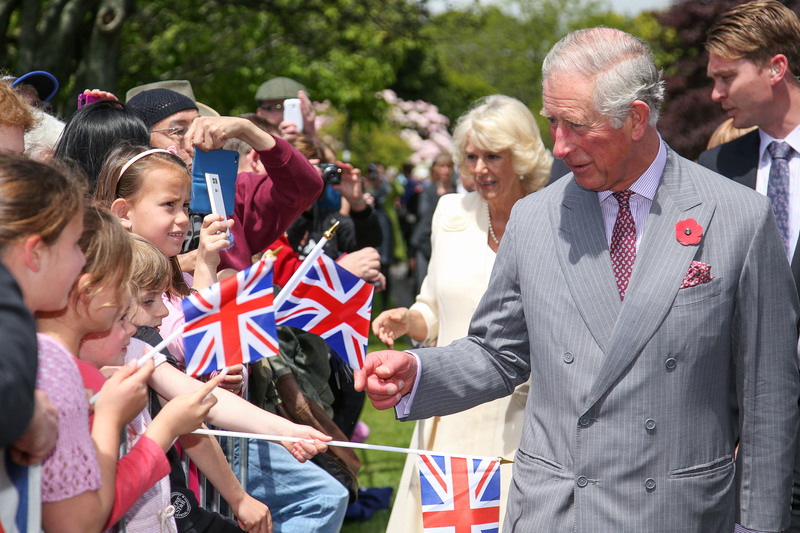 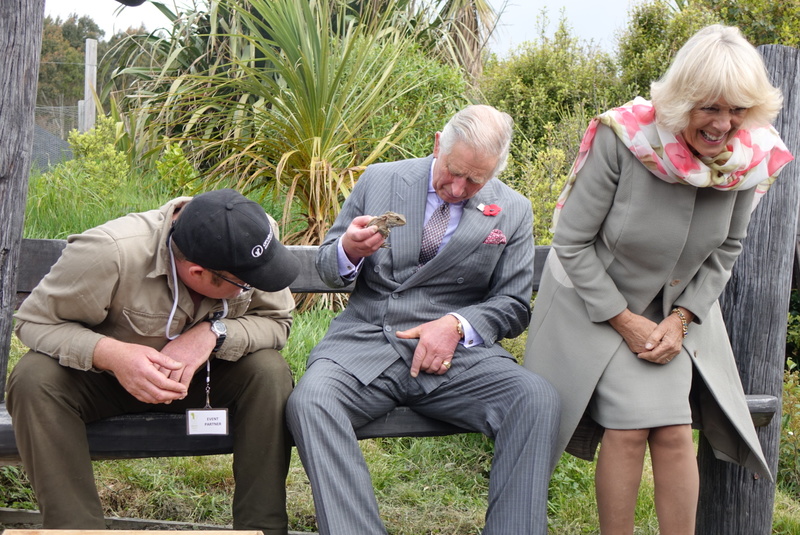 A bee landed on Prince Charles' leg while he was holding the tuatara in Dunedin. Photo: RNZ / Ian Telfer 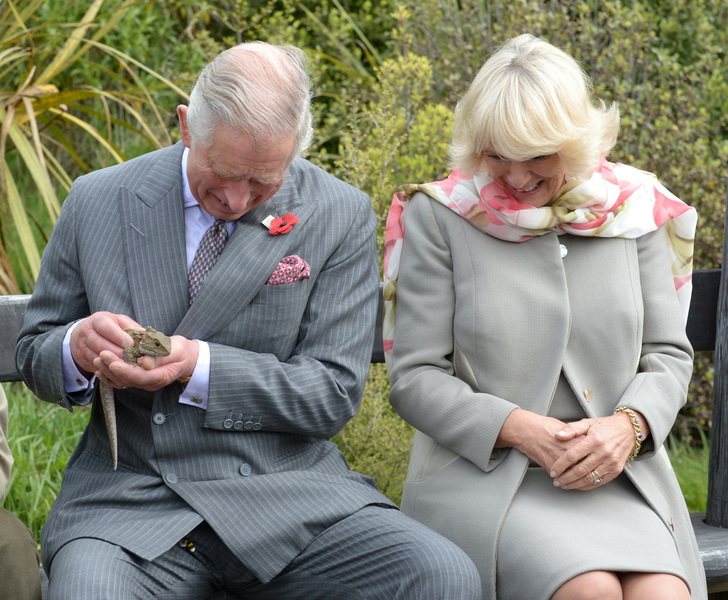 The offending bumblebee can be seen in this photo's bottom left. Photo: SUPPLIED / Pool Photo 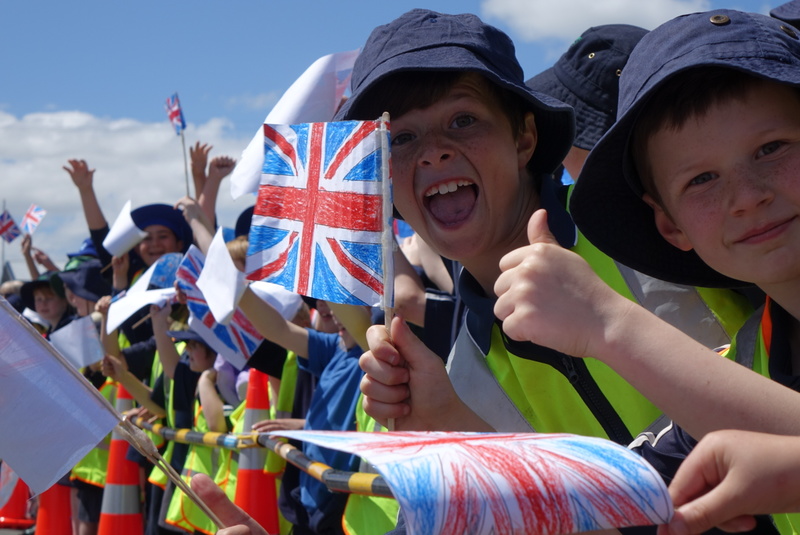 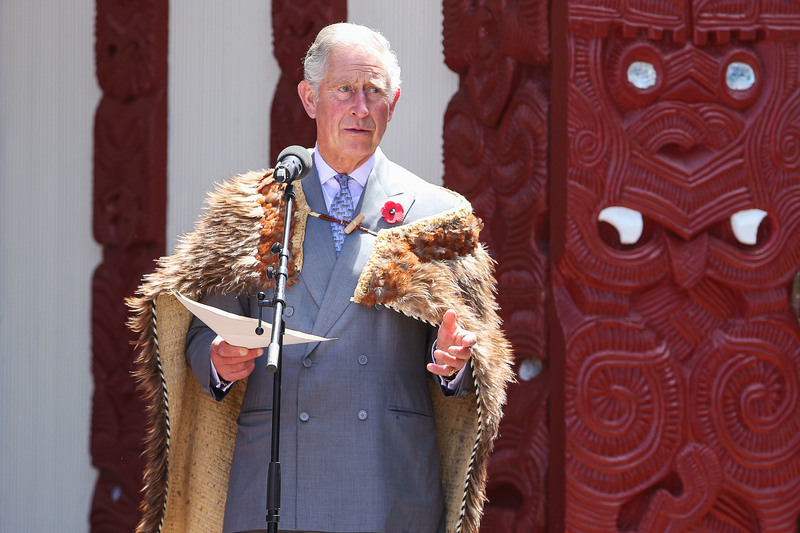 Prince Charles wearing a korowai presented to his parents in 1954 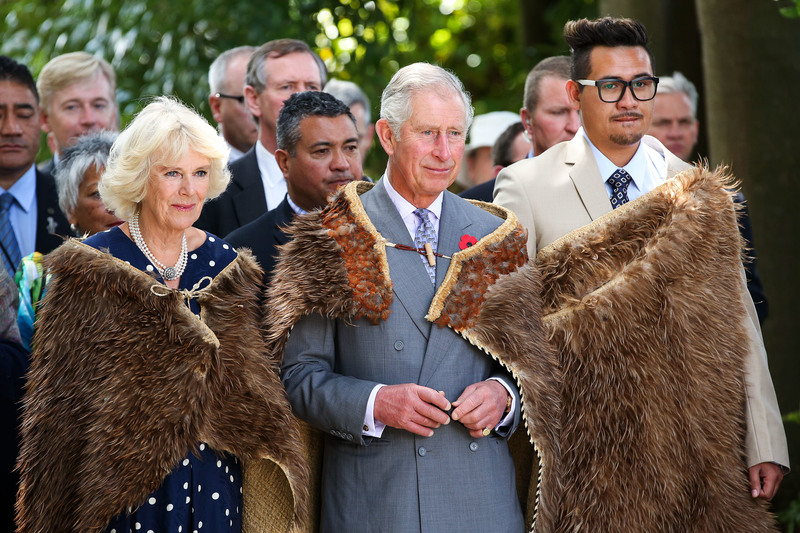 Prince Charles and Camilla wear korowai presented to the Queen and Prince Philip on their New Zealand tour in 1954. 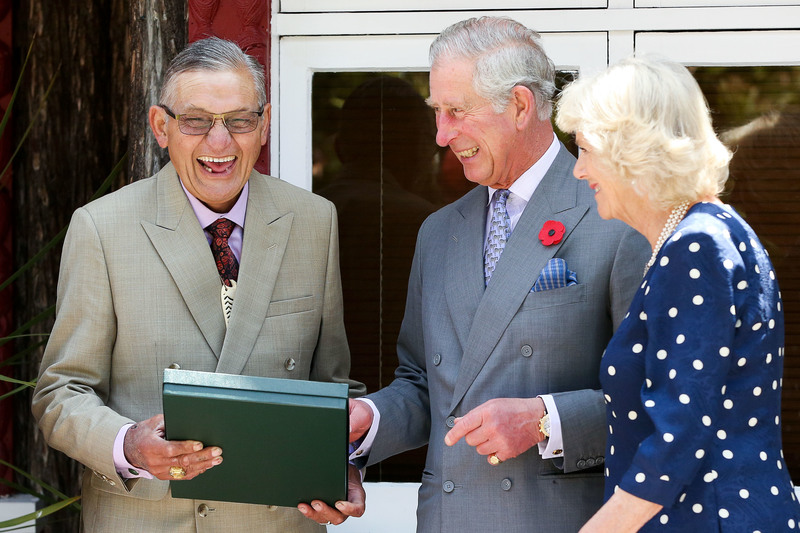 Maori King Tuheitia with the prince and duchess 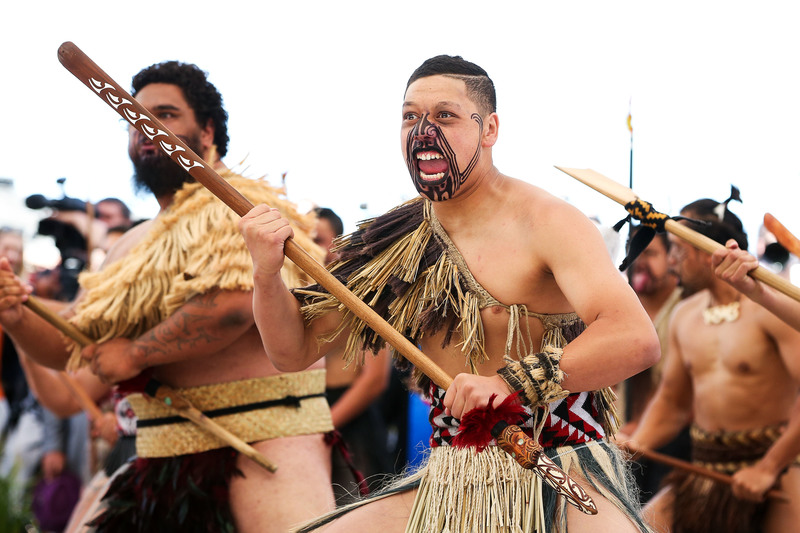 Prince Charles and Camilla are welcomed on to the marae 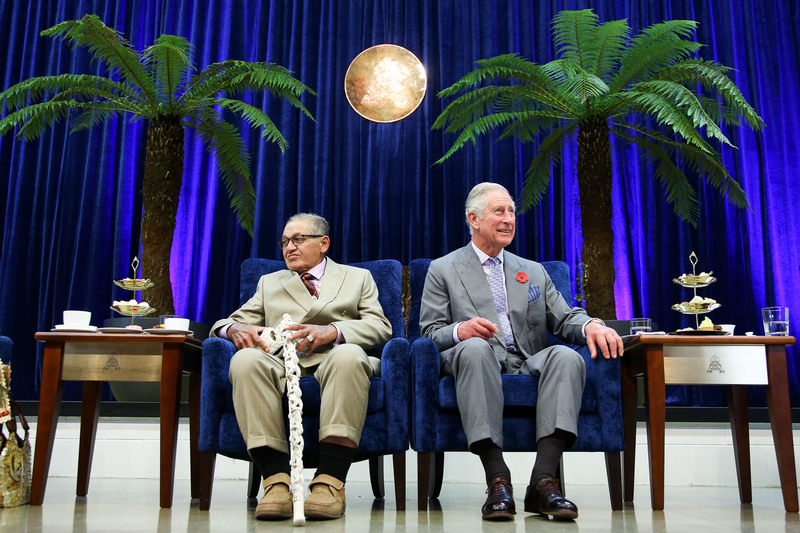 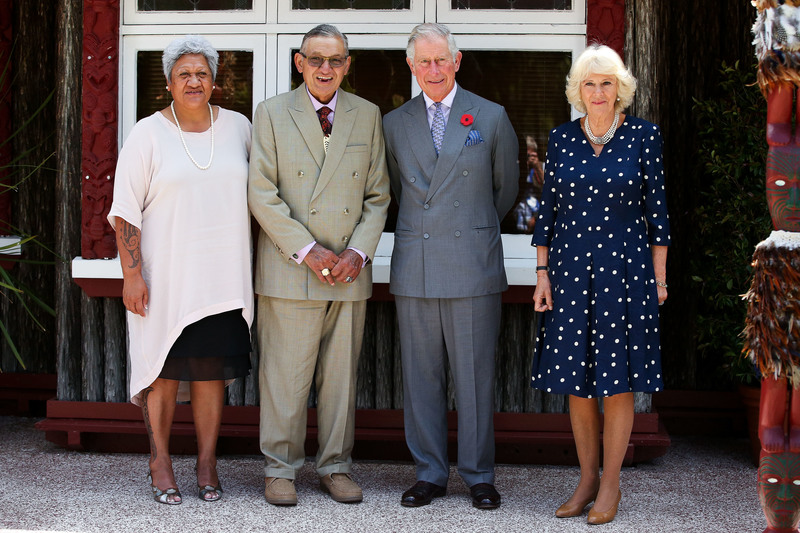 King Tuheitia and his wife Atawhai, left, with the prince and duchess 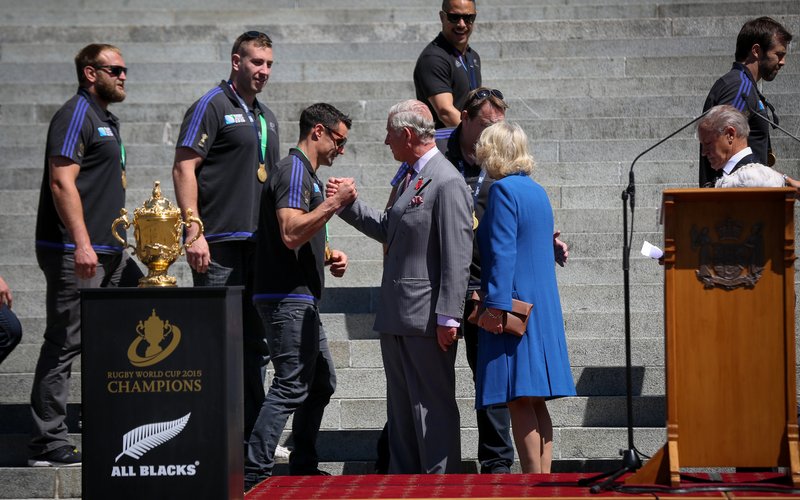 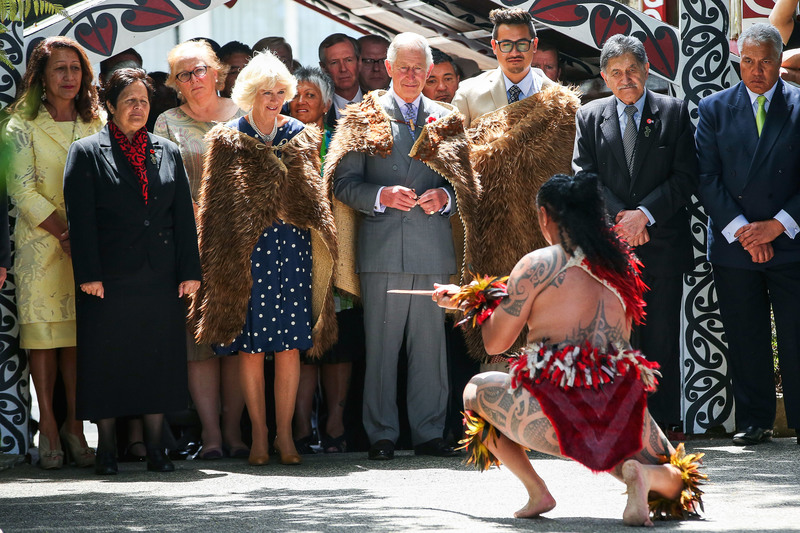 The royal couple are welcomed to the marae 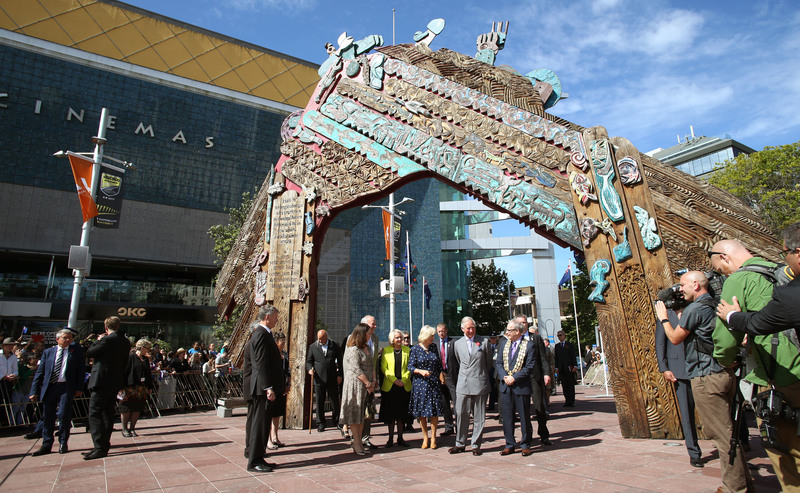 The prince and duchess arrive at Auckland's Aotea Centre 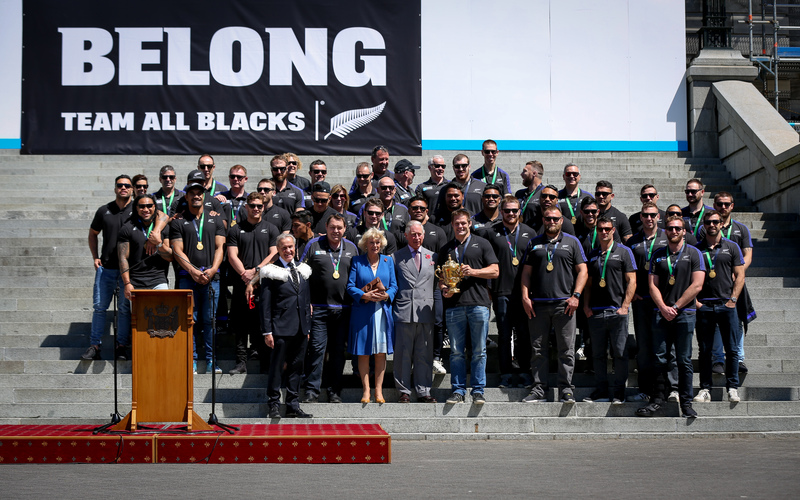 Prince Charles and Camilla have a group photo with the 2015 Rugby World Cup Champs at Parliament. Photo: RNZ / Alexander Robertson 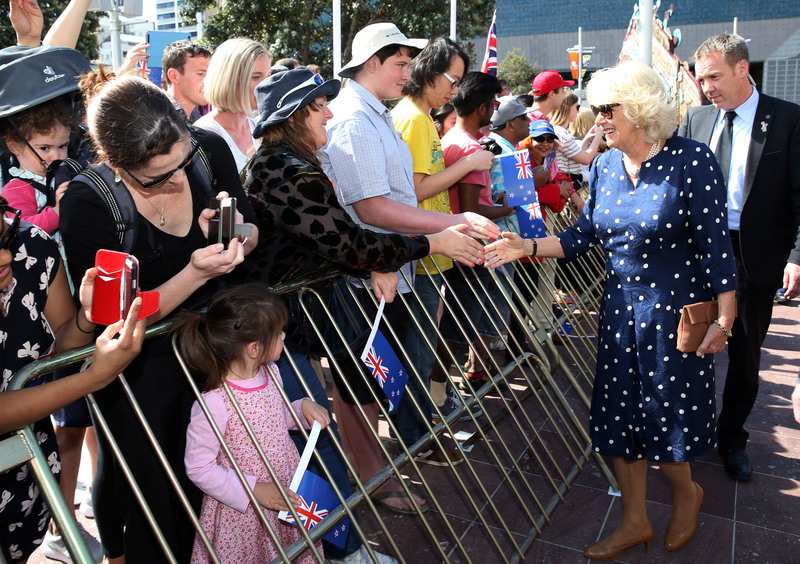 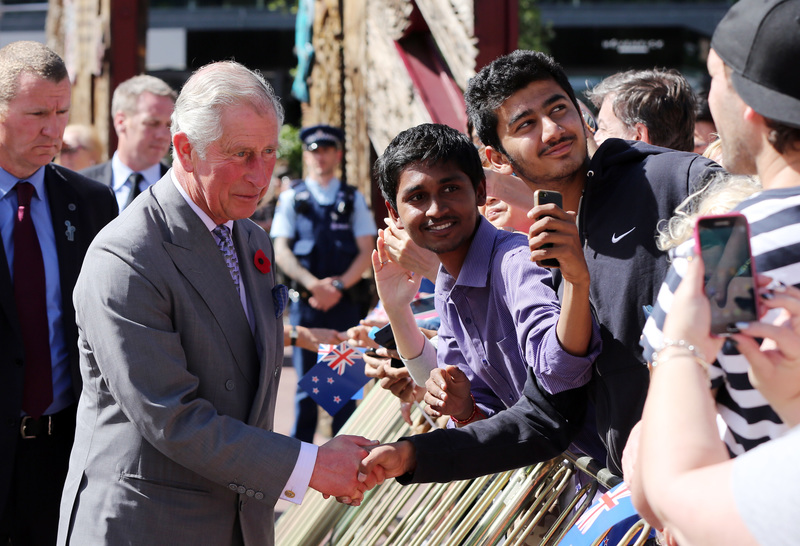 A young fan takes a selfie with the prince. 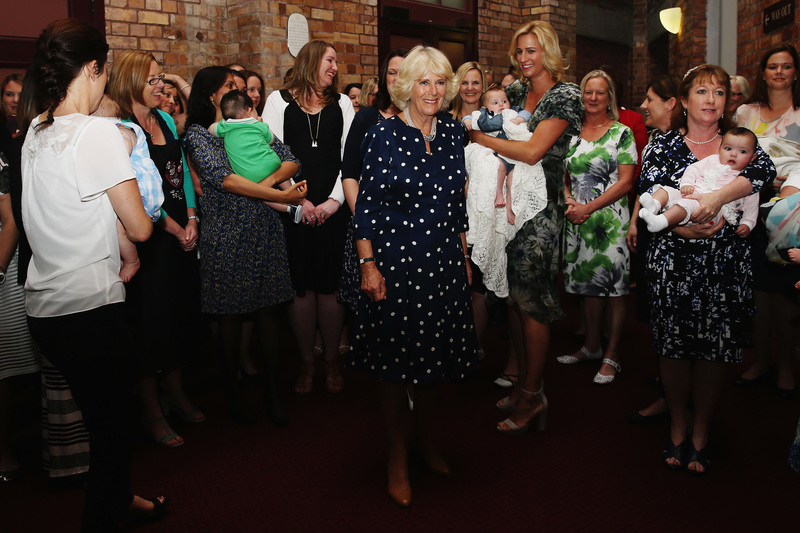 Camilla meets with mums and their babies from Auckland charity Bellyfull 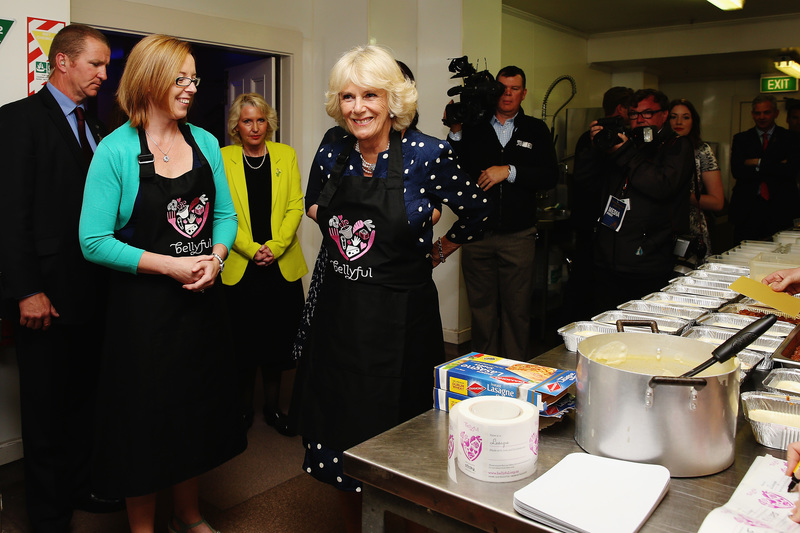 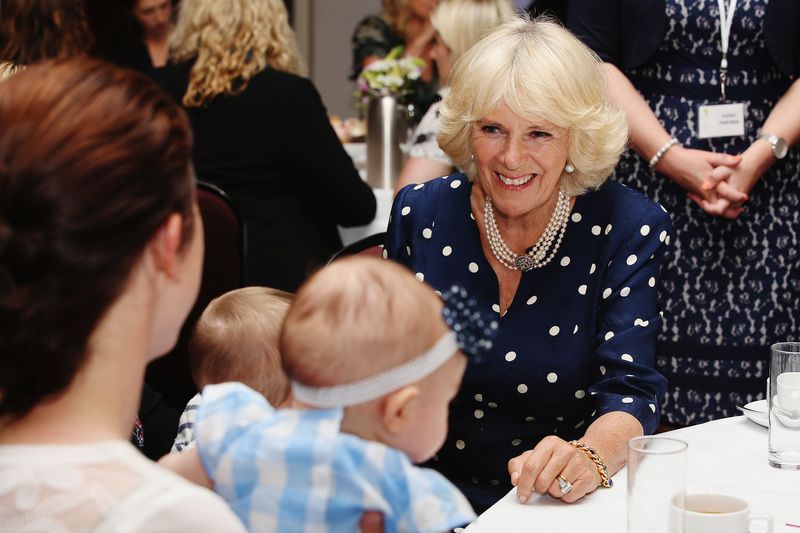 Camilla meets with mums and their babies from Auckland charity Bellyfull

New Zealand's leading philanthropists turned out for an evening with the Prince of Wales on Sunday night.

Around 60 prominent New Zealanders attended the reception, which was hosted by Governor General Sir Jerry Mateparae at Government House in Auckland.

The event aimed to explore opportunities for The Prince's Charities in New Zealand.

The Prince's Charities is an umbrella organisation of 14 charities of which Charles is president. The organisation has only just become active in New Zealand.

Wellington businessman Peter Biggs is the Prince's Charities' special representative in New Zealand. He said the reception was an opportunity to explore potential partnerships between the organisation and New Zealand philanthropists.

In his speech before Prince Charles' arrival, Biggs told the assembled guests that they had been invited because of their generous contributions to New Zealand.

"You believe in making this country, New Zealand, a better place to live and grow up in. And his Royal Highness the Prince of Wales shares that vision," Biggs said.

The Prince arrived at 7pm, without his wife Camilla the Duchess of Cornwall.

Among the attendees was Warehouse founder Sir Stephen Tindall, who set up philanthropic organisation the Tindall Foundation in 1995.

He said he hoped the Princes Charities would encourage more Kiwis to give to charity.

"It's a little bit skinny on the ground here, philanthropy," he said.

Earlier in the day, the royal couple were welcomed to Turangawaewae Marae by paddlers in a fleet of waka and greeted with a powhiri.

The prince and duchess wore korowai - cloaks that had been presented to the Queen and Prince Philip on their New Zealand tour in 1954.

The royal couple joined King Tuheitia and his wife Atawhai on a barge moored to the river bank to watch five waka come down the river and swing in front of them as the paddlers saluted the royals.

They returned the salute by holding up a ceremonial paddle. 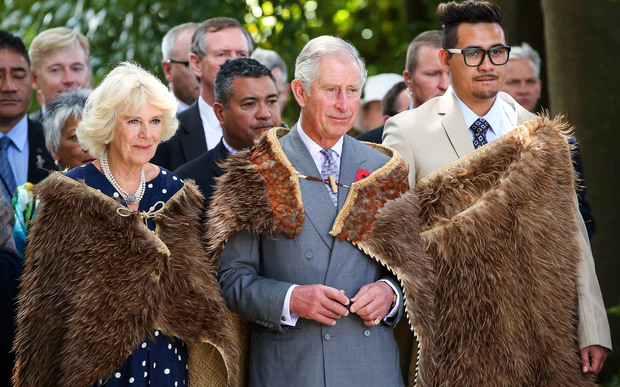 Prince Charles and Camilla wear korowai presented to the the Queen and Prince Philip on their New Zealand tour in 1954. Photo: Supplied/ Pool copy

A spokesperson for the Maori King said the visit cemented the relationship between the royal family and Kingiitanga.

Tukoroirangi Morgan said the prince was well aware of the growing economic power held now by iwi such as Waikato-Tainui.

The prince commented on how far the iwi had come since his last visit to Turangawaewae in 1994, Tukoroirangi Morgan said.

Charles and Camilla meet and greet in Auckland

The couple then headed north to Auckland, where they were welcomed by an eager crowd of fans and curious tourists at Aotea Square.

The royal couple took a speedy trip through the sun-drenched square greeting the public before entering the Town Hall and separating to speak with different charities.

They were welcomed by mayor Len Brown, with a karanga from Fiona Smith of Ngati Whatua.

She showed Prince Charles a black and white photo showing himself and Princess Diana greeting school children - including her - at Greenlane Racecourse.

She said she was pleased Charles remembered the event and he told her he knew it happened in about 1980. 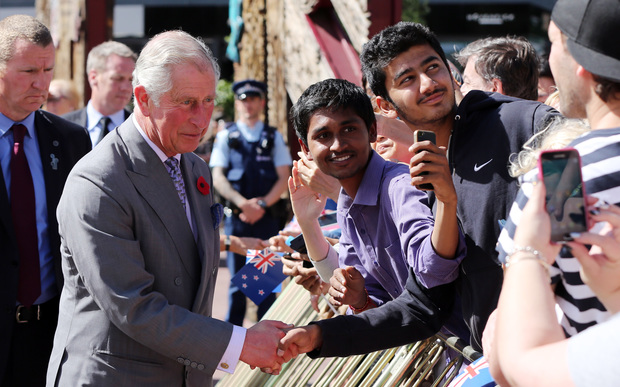 Many British fans also turned out to welcome the royals.

Flora Woods, from the village of Lacock in Wiltshire, shared a conversation with Camilla about their shared geographical connection.

She said Camilla had lived not far from her village, in Reybridge.

Anna Dixon, on holiday from the United Kingdom, said she was a "true royalist".

She joked that she was excited about seeing Prince Charles "but it would have been better if was Harry".

Her friend Niamh O'Kelly, from Ireland, encouraged Ms Dixon to go in for a kiss, but when it came down to it the two girls settled for a polite handshake.

Auckland resident Alec Field, originally from Notting Hill in London, said New Zealand royal tours were the closest he could ever hope to get to Prince Charles.

One avid Kiwi fan thrust two packs of jet plane lollies at Camilla telling her they were "good to chew".

The royal couple laughed as TV3 personality Guy Williams shouted from the back of the crowd "I love you" as each went by.

The duchess later headed to the charity Bellyfull, where she entered a busy kitchen and donned an apron.

Camilla was shown behind the scenes of the charity that helps new mothers by delivering hot meals during those stressful early months of being a mother to a newborn baby.

"It's what everyone needs," she said upon hearing how the organisation operated.

Upon entering the kitchen set up in Auckland's town hall, the duchess was given an apron to wear as she observed the assembly line of volunteers, busy making individually packaged lasagnes for families in need. 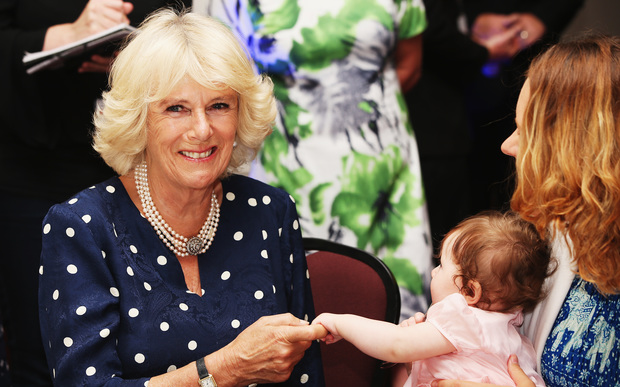 The Duchess of Cornwall interacts with a baby at Auckland charity Bellyfull Photo: Supplied/ Pool copy

Popping the apron over her navy polka dot Fiona Clare dress, the duchess quipped, "You're not going to get me cooking are you?!"

The duchess met with volunteers and recipients of the charity, who were gathered at the town hall, many with their young children.

She spoke at length with Audra Blackburn, who was originally a volunteer and now a recipient of the charity's hard work, which was much appreciated help whilst caring for her son Corbin, who suffers from reflux.

"She asked about my experiences being a mum and said she knows how much it would mean to have the help of this charity. She said she appreciated what a huge help it is to have dinner cooked when you have a young baby."

"She was lovely and was making faces with Corbin and really interacting. She really took an interest in the charity and us, she was very genuine - her eyes didn't glaze over when she spoke to us, she was very engaged."

Prince Charles parted ways with the duchess to meet with members of Nga Rangatahi Toa, a group helping young people who have been kicked out of school.

About a dozen members of the group spoke with the prince for about twenty minutes at the Auckland Town Hall.

They described to him how Nga Rangatahi Toa had inspired them to carry on their education after leaving the mainstream school system, and he questioned them on their aspirations and passions.

A member of Nga Rangatahi Toa then invited the prince down to the Town Hall's auditorium, where several members of the group performed.

One girl, Rosie, performed an original song about the struggles she faced growing up, but faced away from the audience of about 100 people, because she was too shy.

Others delivered spoken word and poetry.

Prince Charles was then invited on stage and gifted with two bags, which he was instructed to share with his children and grandchildren.

She thanked him for his time, and said his visit meant a lot for the members of Nga Rangatahi Toa.

"The kids always rise to the occasion. I was probably more nervous than they were," she said.

"Every experience like this really makes them realise that everything in the world is possible."