Prince Charles and the Duchess of Cornwall have ended a whistlestop visit to Nelson and Tasman. 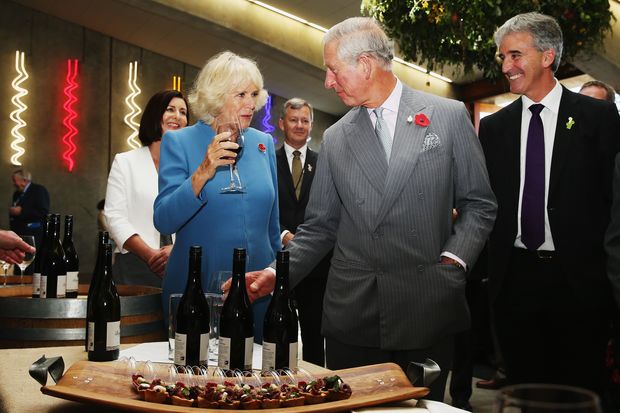 Prince Charles and the Duchess of Cornwall at the Mahana Winery. Photo: Pool photo

The royal couple managed a public walkabout, a visit to Nelson's Cawthron Institute and World of WearableArt (WOW) gallery, and a food and wine event in the four hours they were in the region, which turned on its warmest charm for the first royal visit to the region since 1986.

A food and wine event at the Mahana Vineyard and Winery in the verdant Moutere hills, saw the royal couple chatting easily with some of the region's top wine, cheese and seafood producers. 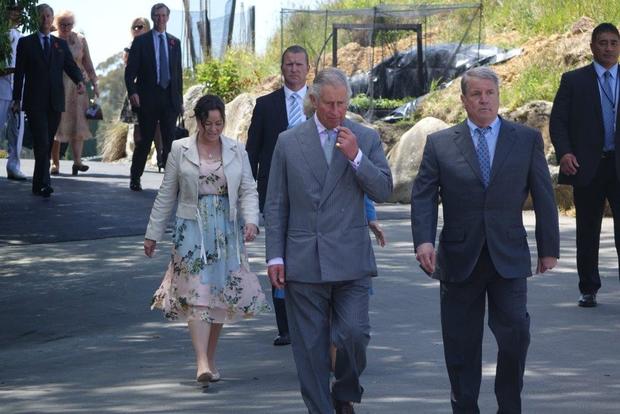 Winery owner Glenn Schaeffer, a retired Las Vegas casino executive, philanthropist and major supporter of the arts in New Zealand, said it was a huge honour hosting the royal couple.

"There's something about the monarchy that stands above all else. To have the future King of England here, and the Duchess - it's just a tremendous honour for us," Mr Schaeffer said.

Mahana grows mainly pinot noir, with some pinot gris, riesling and chardonnay grapes and achieved full organic certification in 2011. The gravity-fed winery is built on four levels, to reduce the use of pumps. Power is also saved by using insulated wine tanks and a precisely managed temperature control system. 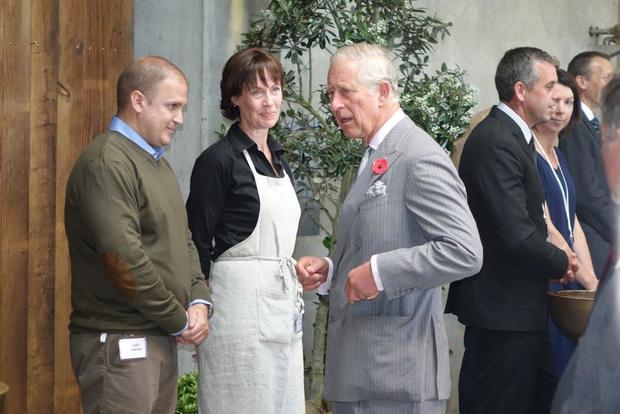 Prince Charles chats to some of the Nelson Tasman region's food and wine producers at the event in the Mahana Winery cellar. Photo: RNZ / Tracy Neal

Prince Charles appeared to enjoy a lengthy chat with winemaker Michael Glover as the royal party, escorted by Mr Schaeffer and his fiancee Chandler Parker, descended the winery's multiple levels to the food and wine event in the lower cellar.

Judy Finn of nearby Neudorf Vineyards, had a long chat with Camilla, the Duchess of Cornwall who is President of the United Kingdom Vineyards Association.

Mrs Finn said she congratulated the duchess on the increasing strength of English wines.

"They've just won a taste-off between the French - between champagne and English sparkling wine, which they won and that's what I said congratulations for. It's a real mark for the future of English wine. They're very, very good."

Mrs Finn said the duchess was easy to talk to, and Nelson had shown itself off in top form. 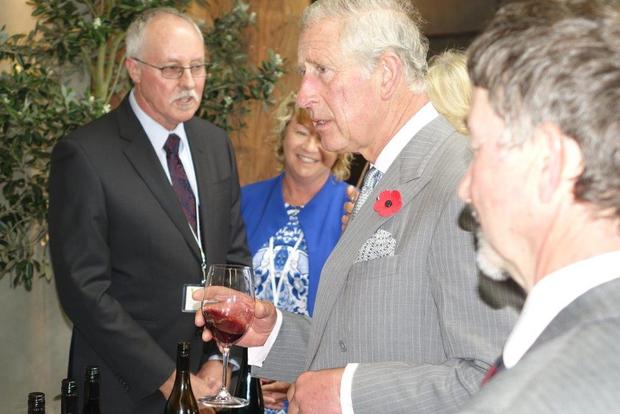 Prince Charles samples some of the wine on offer at the Nelson Tasman food and wine event. Photo: RNZ / Tracy Neal

The Source to Serve Nelson-Tasman food and wine event in the Mahana Winery cellar was also a celebration of the region's high quality seafood and cheese products.

The prince and duchess were then escorted around the various stations set up with produce.

New Zealand King Salmon board member Paul Steere said it was a "brilliant day". He said Prince Charles, as president of the Salmon Anglers' Association, was particularly interested in New Zealand salmon farming operations which were different to those in Scotland.

"He did suggest they might try the same later on," Mr Steere said.

Minister for the Environment and for Building and Housing Nick Smith said he and Prince Charles discussed matters around conservation and housing.

"He recognised we had challenges in the area of housing and shared some of the Living Communities work that his own trust has been doing, and I'm very keen to follow up on some of the challenge of how do you build intense urban communities that actually work, and he's a big fan of that.

"I also acknowledged that Prince Charles has shown a lot of leadership in the area of challenging countries to do better around marine conservation."

Prince Charles was then whisked away for a flight to Westport while Camilla returned Wellington for several engagements.

Next stop for Prince Charles - Westport

More than 2000 locals turned out to see the prince in Westport this afternoon.

Crowds cheered as Prince Charles arrived in the town centre and he was greeted with more cheers and applause during a walkabout. 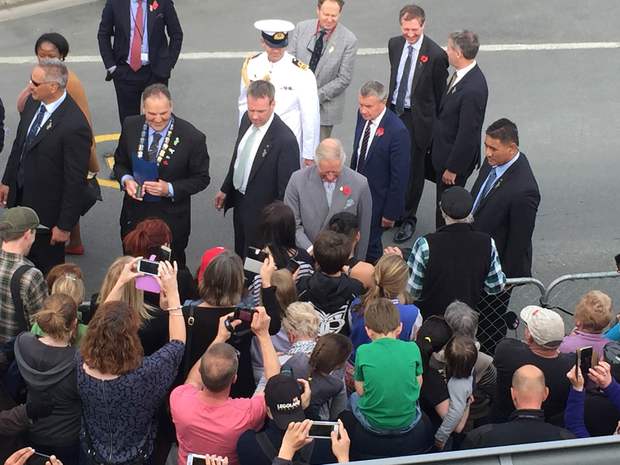 "He asked what school I went to and is this my brother and then we shook hands," said Sheldon Walsh, after his royal encounter. The eight-year-old said he was too busy fielding the prince's questions to snap a selfie with the guest of honour.

Buller High School prefect Emily McDonnell had the same problem as she and the school's head boy, Tony Carleton, showed the prince plant boxes pupils had built for display in the town centre. It was left to their friends in the crowd to capture the moment for them.

Having charmed the crowds, Prince Charles visited the West Coast Brewery for some beer (the organic brew piqued his interest) and whitebait patties.

He turned to the expectant crowd watching his every move and declared the lager and pattie a perfect match.

"Here's to Westport," he said.

And back to Wellington for the Duchess

The Duchess of Cornwall looked in her element playing with pooches at Wellington's SPCA.

Although she seemed to battle a cough, it was all smiles as she walked through the facility and learned about the history. 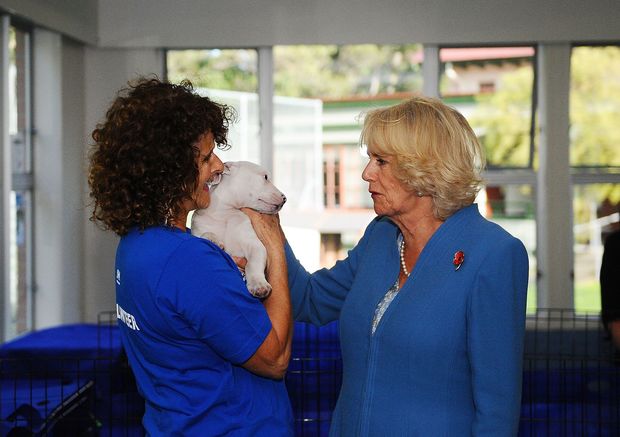 The duchess at the SPCA in Wellington. Photo: Pool

The duchess placed a leaf on the tree of remembrance for her late Jack Russell Freddie who died in 2007 at the age of 21. Camilla particularly thought this was a neat idea, commenting to staff that it was a beautiful way to remember her beloved pet.

The whirlwind visit ended with the duchess meeting board members and volunteers and chatting to them over a strong cup of English breakfast tea.

One board member, Charlotte Fisher, who talked with the duchess said they talked about horses for much of the time. Ms Fisher said the duchess came across extremely sincere and friendly.