New Zealand rugby fans around the country have celebrated the All Blacks' ultimate victory in the 2015 Rugby World Cup.

The All Blacks have won today's final, beating Australia 34-17 to retain the title of world champions.

In Auckland, black-clad fans crammed around TV screens this morning, cheering, chanting, singing and exploding with joy at every try.

When the final whistle was blown, the crowd in the Fox sports bar on the waterfront erupted, hugged, cried and roared with applause.

Michaela Brchlova was "over the moon".

"I actually was too scared, I didn't even dare to hope this could happen. I've been on edge all week," she said. 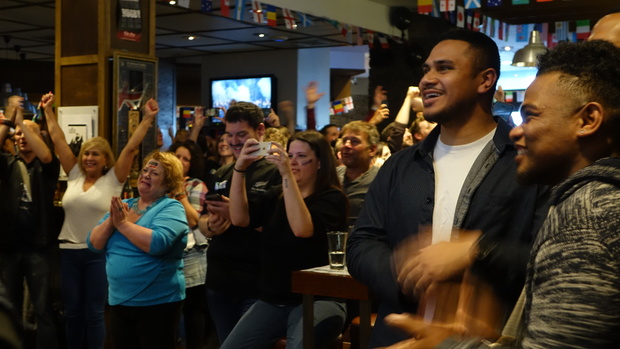 Fans at the Fox sports bar on Auckland's waterfront were "over the moon." Photo: RNZ / Mohamed Hassan

Marilynna Burton said it was more than just a physical victory.

"Pride is not enough, it was the spirit individually and collectively among the team. It was that inner spirit, the essence, that takes over any physical or mental image. We are the only country that brings our boys up to be All Blacks."

Susan Ryan - who turns 70 tomorrow - said it was the best birthday present she could ever have.

At the Five Stags Bar in central Wellington, there were whoops and shouts of joy when Beauden Barrett scored a last-minute runaway try. 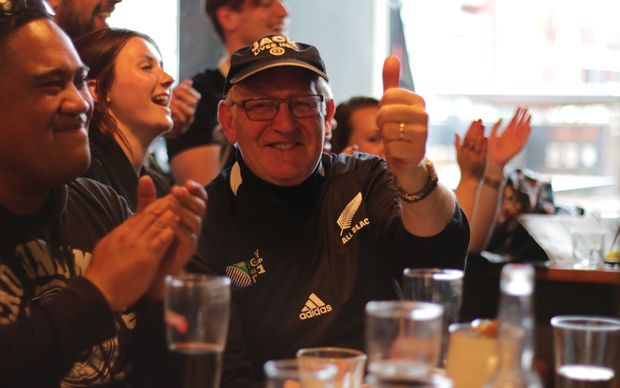 To get to the Five Stags, some fans has got up early, while others had been in town all night.

Whether they were in a Halloween outfit with smudged facepaint, or freshly applied black stripes, everyone was backing the All Blacks.

"It took'em about half an hour to get into their flow, lot of mistakes, a lot of handovers. But that try at the end [of the first half] was classic kiwi tactics. It was amazing to see," said one man.

And by half-time, after the All Blacks' first try, the bubbles had started flowing. 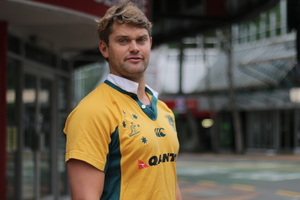 People from all over the world were backing the All Blacks.

"We're smashing it, like we've got a good cushion behind us," said one man from the United Kingdom.

A Frenchman said "the hero tonight for me [is] Dan Carter".

There were South Africans and Germans at the pub, too, all eager to support the All Blacks in the final.

And then before the match had even ended, the non-stop cheers were deafening.

"I'm absolutely ecstatic! This is like... unbelievable! It's wonderful!" said one woman.

RNZ talked to one lone Australian, Simon Nothling, walking down the road after the loss.

"We played well, we just weren't quite good enough," he said. "The first half let us down."

"New Zealand probably had a bit more experience in World Cup finals, I think, which probably helped them."

Mr Nothling's grandfather played for the Wallabies against the All Blacks in 1922. 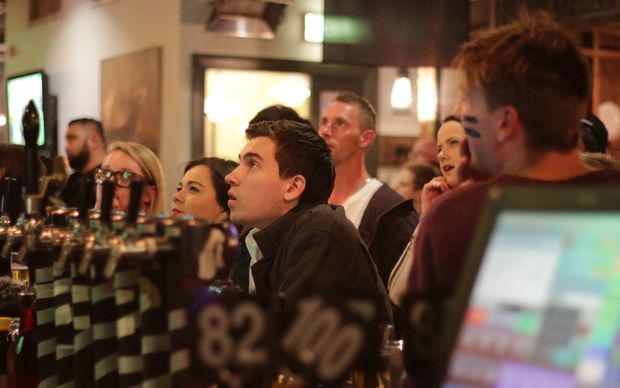 Patrons at the Five Stags watch nervously during the second half of the final ... Photo: RNZ / Michael Cropp 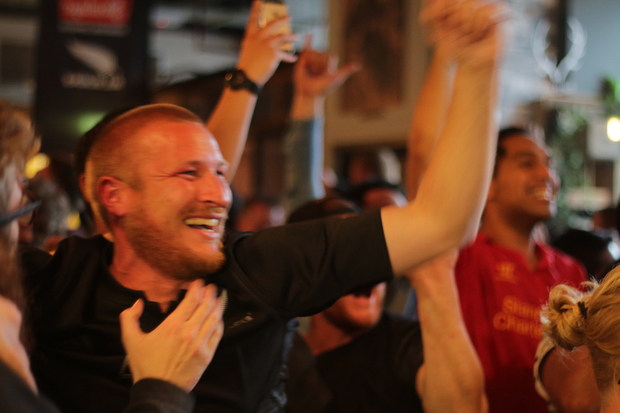 ... and are rewarded at the end. Photo: RNZ / Michael Cropp

Yesterday, a fan placed a record bet of $400,000 on the All Blacks beating the Wallabies - the TAB's biggest wager since it was established in 1961.

The TAB said the punter will now take home $540,000 after the All Blacks won the Webb Ellis Cup.

Several arrests after game in Auckland

Police said there were several arrests after the game in Auckland.

With bars around the city packed to capacity, Senior Sergeant Scott Leonard said there were some incidents of assault and drunken disorder as people flowed back out into the streets.

"There's been some arrests for intoxication and disorder... All in all, a busy night with a couple of groups in disorder as people are leaving the city after the game."

Mr Leonard said it was too early to tell just how many of the arrests were related to the World Cup.