A Nelson-based Swiss marine biologist is counting on some New Zealand sailors to help unlock the secrets of climate-change prediction. 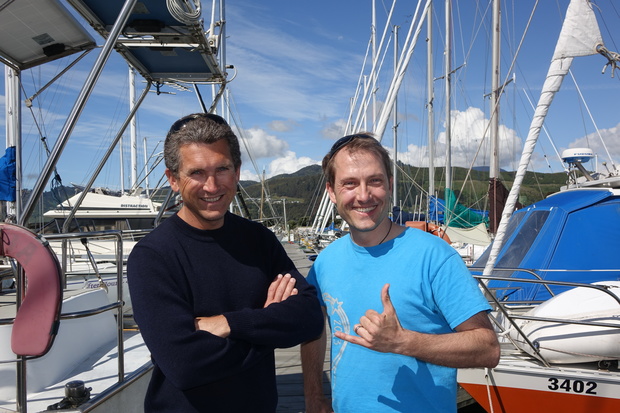 Xavier Pochon who works at the Cawthron Institute, is part of a significant international study that aims to introduce biological research into climate change analysis, which he said was currently missing from computer modelling.

Dr Pochon helped co-ordinate the New Zealand sailors who are part of a worldwide fleet of 25 yachts whose crew have volunteered to help in the Plankton Planet study. They have since become known as citizen scientists, or "Planktonauts".

The New Zealand sailors were invited to join the study by Plankton Planet headquarters. Dr Pochon said because time was short they targeted the group of seasonal sailors who travelled each year on the South Pacific circuit.

"We decided to contact the Island Cruising Association and they were really, really enthusiastic and automatically came back to us with five volunteers."

The five New Zealand yachts were currently on their way back from the winter sailing season in the Pacific, carrying samples of dried plankton material to be analysed by scientists in France.

Xavier Pochon shares the research with scientists in this video.

The Planktonauts are continuing the work of a team of international scientists who began their research on the vessel Tara - previously Sir Peter Blake's Seamaster.

Dr Pochon said understanding plankton was key to predicting climate change, and a good way to gather it was to ask the global sailing community to help.

Assisting him in Nelson was Plankton Planet New Zealand team member Emmanuel Malpot, a French sailor working in Nelson in the aquaculture industry. He liaised with Dr Pochon to develop Plankton Planet in the south west Pacific.

"It's been going for 12 months now, and I've mainly been trying to create a network of enthusiastic supporters," Mr Malpot said.

Dr Pochon said the Planktonauts were required to take, preserve and store samples from a number of ocean locations, as well as provide information for each sample such as GPS co-ordinates.

Dr Pochon said the Plankton Planet team developed a "brilliant concept" in a simplified sampling tool kit distributed to each crew member that allowed them to collect plankton without any particular scientific expertise or protocol for them to isolate DNA on the vessel without chemical of electricity.

They collected plankton by towing a special oceanographic mesh behind vessel at reduced speed for about 10 minutes. The concentrated plankton was then filtered and the DNA isolated by desiccation.

"Once these samples are isolated they're then sent to world expert biologists who use cutting edge sequencing technology that characterises the biodiversity of these plankton communities."

Dr Pochon said plankton communities were critical to the survival of the planet.

"They not only produce about 50 percent of the oxygen we breathe, but trap a huge amount of excess carbon dioxide down deep in the ocean, which has implications for regulating the climate."

He said the information gathered might also provide clues to why marine species suddenly start to change in distribution, such as tropical sea turtles turning up in New Zealand.

"There are many, many great implications and currently very little is known about open ocean plankton communities," Dr Pochon said.

The New Zealand yachts are due to arrive next month in Opua, where the samples will be collected for analysis in France. Plankton Planet expected to grow the network of volunteers to include hundreds of yachts.