A government commissioned report has found defence force personnel on board frigates during the Labour government's protest against French nuclear testing at Mururoa in 1973 were not exposed to harmful levels of radiation. 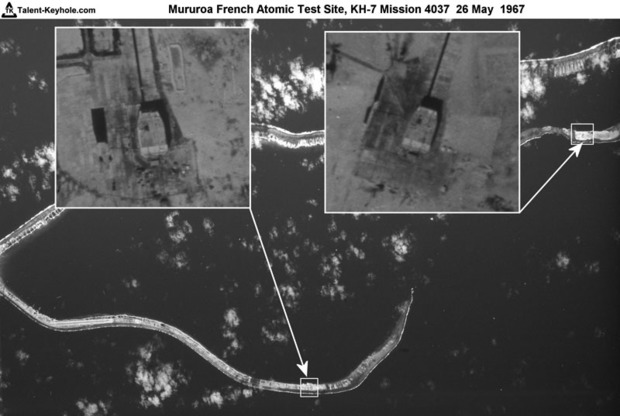 It assessed the impact on veterans from nuclear testing, when 500 crew sailed aboard two navy frigates to witness two atmospheric nuclear tests.

The report was carried out by the Institute of Environmental Science and Research Limited.

Scientists have assessed the external radiation dose rate, the internal dose rate from seawater used in ships, and the hereditary effect on offspring.

The report could only rely on information gathered by a radiation officer on-board at the time, from the National Radiation Laboratory, Jim McCahon.

"The only radiological record available for the deployment is McCahon's report, with other information contained in ships messages (such as news media releases) being based on McCahon's reporting of on-board monitoring."

It said personal devices (dosimetry badges) worn by the crew to monitor radiation levels ended up being of little use.

"Unfortunately, the personal dosimetry badges were fraught with practical problems during the voyage.

"After the rendezvous with HMNZS CANTERBURY, McCahon found to his dismay that badges worn by crew of that ship had been tampered with due to lack of training, rendering most unusable.

"For example, badges had been taken out of their plastic envelopes, chips removed, and badges put through the laundry. In fact, only 35 of the original HMNZS CANTERBURY issue could be used."

Based on the information gathered by Mr McCahon, the report concluded the crew on neither frigate was exposed to significant levels of radiation, that could be attributed to the weapons testing.

"The HMNZS OTAGO crew was exposed to none; with external radiation levels, atmospheric radioactivity levels, and contamination levels being essentially zero."

"The only difference for HMNZS CANTERBURY was that traces of atmospheric radioactivity were detected a day after the test, with this potentially delivering a small dose of less than 0.05 millsievert.

"Drinking water contamination, arising from the distillation of seawater, has been discounted as a possible route of exposure.

"Due to the lower natural background radiation levels over the oceans and the lack of exposure to other sources of radiation, the crews...received no more radiation exposure during their one month deployments to Mururoa than their families did at home, and possibly less."

New Zealand veterans had hoped the report would prompt a closer look at the effects of radiation on their children and grandchildren.

The veterans' group has said many are showing signs of inter-generational conditions they believe are linked to nuclear fallout.