New Zealand could piggyback on Australian research into the wider use of medicinal cannabis, but associate minister of health Peter Dunne is cautioning people against getting their hopes up. 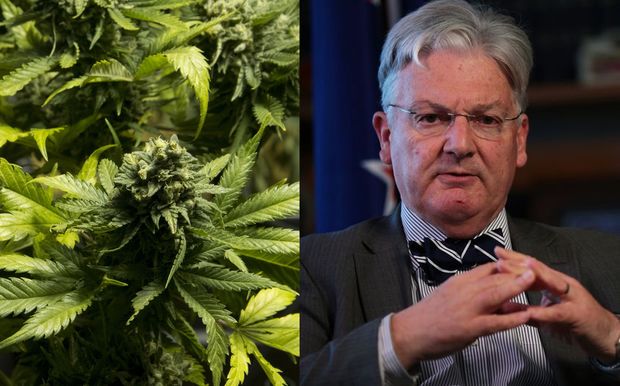 Peter Dunne says raw cannabis is not on the agenda for the current government. Photo: AFP/RNZ

The Australian government is hoping to pass legislation by the end of the year allowing cannabis to be grown for clinicial trials.

New Zealand already allows cannabis to be grown for research and scientific purposes, but Mr Dunne said no one had shown an interest.

He said he was keeping an eye on the Australian situation.

"No one has yet shown an interest in conducting clinical trials in New Zealand because they do not [consider] the market as big enough to make it worth their while. Australia's a different case," he said.

"If products are tested there and emerge as being viable and registered ultimately by the Therapeudic Goods Agency, then it's more than likely that Medsafe here would follow suit and allow those products to be made available in New Zealand."

But Mr Dunne urged caution, saying even if the legislation passed, clinical trials were still to be set up and conducted, with the results still two years away. If those trials are successful, the product would then have to go through an approvals process before it could be sold.

"This is still some years away, and that's appropriate because right around the world trials are taking place for various preparations. None of them are expecting to have answers before next year, the year after at the earliest," he said.

"So this is really in the mainstream of what's happening internationally."

So will New Zealanders be taking part in the Australian trials?

Mr Dunne said while it was a possibility, at this stage it looked unlikely because it appears there will be very few Australians involved.

Children's Commissioner Russell Wills said if the trials were found to be successful, those most likely to benefit were children with epilsepy and adults dying of cancer.

"Because these patient groups are so vulnerable, we need to know that medicines for them are safe and that they work.

"We don't have good evidence yet about patient selection, or side effects, or the right dose. And we don't have products that are at a pharmacutical grade," he said.

Toni-Marie Matich is the chief executive of United in Compassion, a not-for-profit group which educates New Zealanders about the medical benefits of cannabis and promotes research on the issue.

Her daughter suffers from epilepsy, which is known to respond to medicinal cannabis, but she too urged caution.

"What is being identified by the International Cannaboid Research Society is [that] so far it is known that only a small subset of people do benefit. It isn't the cure-all, not everybody benefits: to what degree they benefit and if it's long-term is unknown. It's like any other medicine," she said.

She said while the Australian announcement was welcome, New Zealand was by no means lagging behind and she would not be ruling out trials being carried out here.

"We do have a R & D team and we are looking into the possibility of producing products and running compassionate access trials. But it's a sensitive issue and it's too early to say whether that's possible.

"Our first point of call is to run a national symposium on this issue in March/April of next year, in Wellington," she said.

Mr Dunne said that it was still unclear precisely what products Australia would be testing.