A university-hosted talk from two Israeli soldiers was an opportunity for them to celebrate the loss of Palestinian life in 2014, and should have never been allowed to go ahead, a group of academics says. 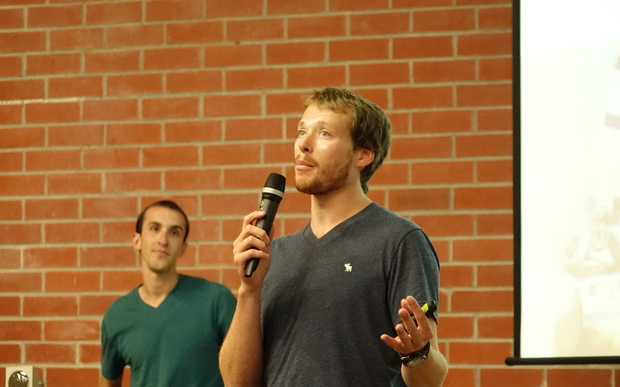 Raphael Wein and Naftali Gross, both 26, say they are students travelling New Zealand to observe the High Holy Days in Christchurch, but protesters say the trip is purely propaganda from the Israeli Government.

The men spoke about the part they played in Operation Protective Edge last year to a crowd of over 100 people at the Victoria University of Wellington on Tuesday to a background of chanting from protesters, and opposition from a group of academics.

Protesters lined the hallways outside the lecture room, and some managed to get inside, chanting 'free free Palestine' and 'murderers'.

A group of 23 academics also penned a letter opposing the soldiers' talk, saying it gave them a platform "to celebrate the very conflict that led to such massive Palestinian loss of life".

"Hosting Israel Defense Force apologists at Victoria will have a chilling effect for Palestinian and Arab students studying in our community, many of whom have experienced either direct loss as a result of the conflict or the more generalised threats of anti-Arab racism generated by the Israeli rhetoric of Palestinians as 'terrorists'," the letter said.

The operation was launched by Israel with the stated aim of ending rocket attacks from Gaza and destroying tunnels used by Palestinian militants.

More than 2000 Palestinians were killed in the Gaza Strip during the operation which ran between July 8th and August 27th. The United Nations said of about 2104 Palestinians killed, 495 were children and 253 women. 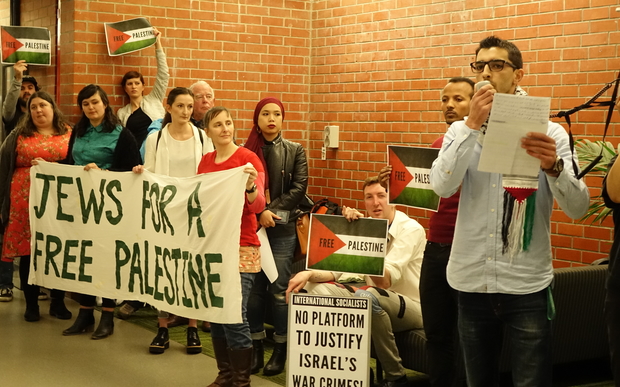 The soldiers shared their stories of death and disaster during the Gaza war in 2014, and their hopes for peace.

Mr Wein, who was born in Australia but had moved to Israel to study, was a reservist for the Israel Defense Force having already completed his mandatory military training in 2010.

He was a university student when the war broke out in 2014, sparked by the deaths of three Israeli teenagers. The country was soon in the throes of war, with rockets showering down upon the land and 80 percent of the country under attack, he said.

Operation Protective Edge was launched after failed attempts by the Israel Defense Force to secure a ceasefire, Mr Wein said.

He said he was in the middle of a lecture when he received a phone call that would throw him into action. An automated voice told him a code and a meeting place.

"By Sunday morning we had all our gear, all our guns, all our bullets. If anything happens to Gaza we are going to serve."

He was in charge of 30 soldiers and their job was to protect the villages closest to the Gaza Strip from attacks out of the numerous tunnels dug under the Gaza border and into Israeli towns.

One day he had to pick up the bodies of five 18-year-olds who were shot dead by soldiers that tunnelled into Israel from Gaza, he said.

"I went to sleep that night and I literally cried myself to sleep thinking there were five new mothers entering the family of bereavement in Israel."

Mr Wein reiterated to those attending the lecture that Israel never stops believing in peace.

The other speaker, Naftali Gross, has a different story, but it's a similar message of sparing civilians, serving his country and preventing terrorism.

He is medical student in Jerusalem, and has lived in Israel since he was six-months-old, undergoing his mandatory military training from 2009 to 2011.

Mr Gross was in the middle of medical exams when he was drafted by the IDF into Operation Protective Edge.

His mission was to protect the West Bank barrier, a controversial separation wall built in 2002 by the Israeli Government to reduce suicide bombings and terrorist attacks.

As a medic he walked with patrols from the separation wall into the city of Hebron during the early hours of the morning to avoid public attention.

They would enter houses whilst children and women were sleeping, and he would have to calm down the family while his patrol bound the wrists and covered the eyes of those they wished to arrest.

"I didn't know what was going to jump out, I always had to be sharp and 100 percent ready for someone to stab or shoot me."

One man was released with a warning as they feared his deteriorating health meant he wouldn't make it back to the fence without having a cardiac arrest, he said.

He goes further to defend the IDF's reputation, saying people need to open their eyes about the Gaza conflict and realise the efforts IDF goes to to protect civilians.

He finished his address by saying the conflict in Israel was between Israel and Hamas, terrorists and non-terrorists and that he hoped for peace.

More than 20 academics from Victoria University joined a group of students opposing the soldiers' talk.

The academics signed a letter opposing the visit, describing the talk being allowed to take part on university grounds as "astonishing".

Their letter said the operation killed 2194 people over 51 days, 1523 of which were civilians - a toll the UN said "may amount to a war crime".

"This attack had a devastating effect on educational and academic life in Gaza. Three universities, seven United Nations schools and at least 140 local schools suffered severe damage from Israeli attacks," the academics said in the letter.

"Our academic colleagues in Palestine are unable to play their part in normal scholarly life due to Israeli blockades, disruptions, and harassment of Palestinian life in Gaza and other occupied territories.

"Palestinian students have their movements restricted, and are thus unable often to take up opportunities for studies abroad or for other normal exchanges.

"It is astonishing, therefore, that an exercise in propaganda and apologetics for military violence should be hosted at a university setting under the guise of education and learning opportunities.

English Lecturer Dougal McNeill said the two men were not just travelling students and their visit was instead driven by the Israeli Government.

Mr McNeill believed the soldiers would not be allowed to speak about the operation without approval from the Israeli Defense Force.

He said it was an attempt to recover from the social media damage done during the Gaza conflict with images and personal narration ruining Israel's reputation.

"This is a desperate rear-guard attempt using academic freedom and personal experiences to win back that ground they lost."

He warned that this would not be the last time New Zealand will see such tactics.

"We should expect more of this. The Israeli state and its apologists worldwide are rattled by the Boycott Divestment and Sanctions movement, they are rattled by growing sympathy for the Palestinian cause."

The Students for Justice in Palestine group, who picketed the university's hallway, agreed with Mr McNeill, saying the soldiers were touring the world as part of the Israeli government's attempt to justify Operation Protective Edge. 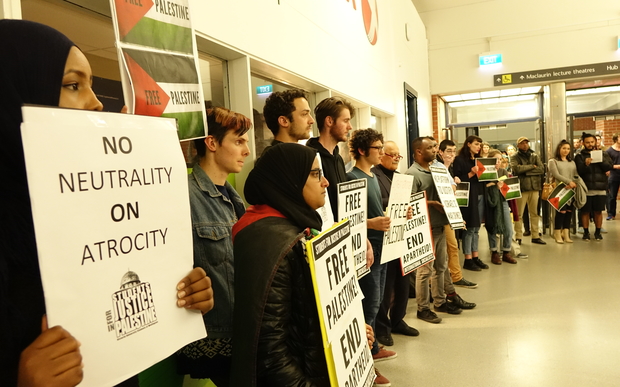 Protest organiser Ian Anderson said the talk should never have gone ahead.

"Hosting it on university grounds legitimises the occupation and the killing of civilians."