Mandeep Singh armed himself with knives and sat on the couches in the lobby of an International college while his wife finished an exam.

When she emerged with another man, the 29 year-old stabbed her three times before turning on his wife's friend and attacking him. 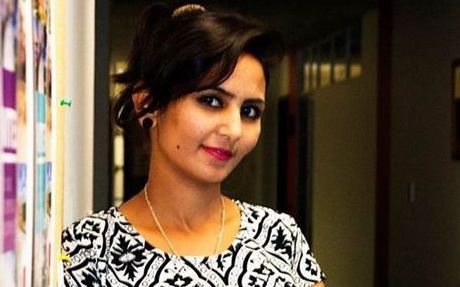 Today Singh was sentenced to life in prison with a minimum non-parole period of 13 years for the murder of Parmita Rani and attempted murder of Parminder Singh.

The High Court in Auckland heard how Singh planned the attack in May.

He phoned a friend of his wife pretending to be someone else and asking about her relationship with another man, Parminder Singh.

He later called Parminder Singh and told him that he planned to murder Ms Rani.

The following day he transferred cash out of his account and sent it on to family.

He then drove to Queen St where his wife was sitting an exam at an international school.

Singh sat on the couches in the lobby before he spotted his wife and Parminder Singh.

He stabbed Ms Rani three times and when her friend Parminder went to help he stabbed him in the head and back.

Justice Woolford paid tribute to a stranger who then stepped in and disarmed Singh, preventing him from continuing the attack.

Singh's lawyer, Adam Couchman, described his client as a volcano.

Mr Couchman said Singh exploded when he learned his wife was leaving him.

He said his client had asked to be deported so he could be with his family and his sick mother.

But he said since that request, his mother had died and he blamed himself for breaking his mother's heart and causing her death.

The possibility of provocation was also raised.

But Crown prosecutor Robin McCoubrey dismissed that idea and said the murder had nothing to do with Ms Rani's actions and was all about Singh arming himself with knives.

He said Singh was presenting himself as the victim and that was concerning.

Justice Woolford said Singh was controlling of his wife but whether or not she had started a new relationship was completely irrelevant.

The judge said there was a level of planning and premeditation involved.

He also described the attack as brazen, given it was in a public place and in daylight.

Justice Woolford said although Singh was sad his wife had died, the focus had really been on his own situation.

At this point Singh's head was bowed and he wept through-out the hearing.

In the public gallery were two brothers and a sister of Ms Rani who had flown from India for today's sentencing.

Justice Woolford also read a letter to the court from Parminder Singh.

Parminder Singh said he can no longer lift heavy objects and has had to leave his job. He's also said he feels like he is judged.

Mandeep Singh will be deported back to India when he is eligible for parole.