Red Peak design can now be added to the flag referendum options, after a bill introducing the design as a contender passed its final reading in Parliament under urgency today. 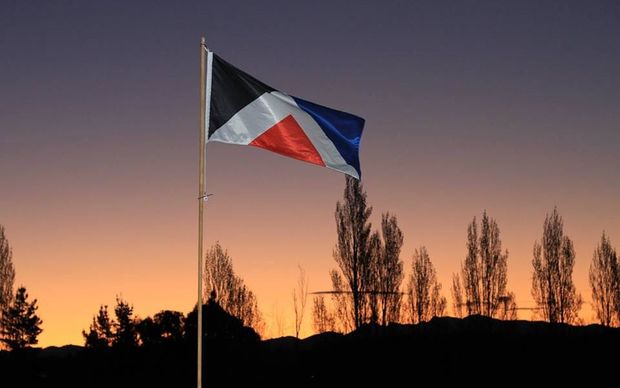 The legislation passed by 109 votes to 12 with New Zealand First voting against it.

Green Party MP Gareth Hughes said he was proud to have been able to provide more choice for New Zealanders.

"It's great to see six political parties come together to support giving Kiwis more choice. We saw politics was the problem, and we've managed to break the deadlock and delivered a great outcome, I believe."

The bill to add the Red Peak design as a fifth option in the upcoming flag referendum, originally presented by the Greens, was introduced under urgency yesterday, and Parliament continued to debate it clause by clause when the House resumed this morning.

The Government adopted the bill after weeks of wrangling with the Labour Party and the legislation passed today can see it added to the first referendum in November.

Labour MP Clare Curran told the House this morning the process was an embarrassing farce.

But ACT Party leader David Seymour hit back, saying it was the Labour Party's fault that it was taking longer than expected to pass the legislation.

The Red Peak design began to gain public support after the four final designs were announced earlier this month.

New Zealand First blocked an attempt by the Greens yesterday to introduce the New Zealand Flag Referendums Amendment Bill. But the legislation was hastily picked up by the government, and within hours, Parliament had gone into urgency to debate it.

Meanwhile, Green Party co-leader James Shaw said he thought people would probably vote to keep the existing flag despite his party introducing the bill to have the Red Peak design added .

Mr Shaw said he wanted people to have the choice of the flag and would vote for it himself, but thought the public would chose the status quo.

He said the whole process was flawed.

"Our preference at this point is to do what South Africa did when they were changing their flag, which is to reset the process once it became apparent how much public dissatisfaction there was. The government is not going to do that, so what we are trying to do is to find a pragmatic way forward."