An electronic petition asking the Prime Minister to include the Red Peak design in the flag referendum has been signed by 50,000 people.

The petition was presented to Parliament yesterday and accepted by ACT leader David Seymour. 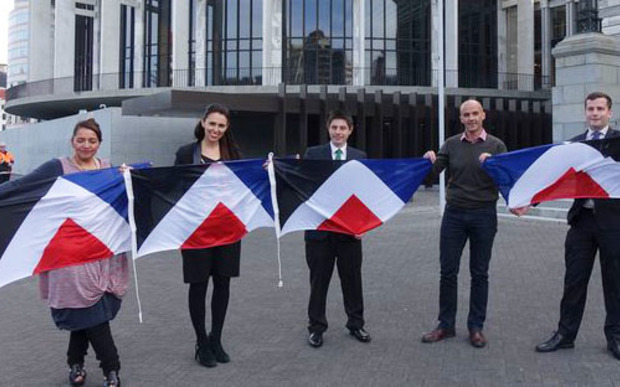 Instead of hundreds of boxes of signed papers, the petition was handed to Mr Seymour in digital form, on a bright yellow USB stick.

The ACT leader was later a little risque when talking to reporters about other countries' national symbols, such as the rooster in France.

"Look you don't actually have to have every national logo on your flag. The French for instance love the coq...okay, let's just start that again," he said. 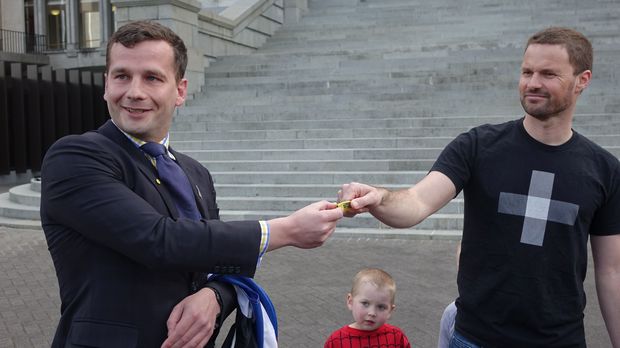 Anna Dean, who came along to the petition handover, said the Prime Minister had been caught out by the support for Red Peak.

"It's been a really interesting groundswell of public support that's kind of come out of nowhere," she said.

"It's amazing that you can turn up here and there are a whole group of designers actually getting involved with something that is going to have huge consequences for the whole country," she said.

Labour MP Jacinda Ardern joined the group of MPs who welcomed the petition. It was the Prime Minister who needed to take action, she said.

"Even if he wants to go for a law change, we've even offered an opportunity there. Let's be clear, this is the Prime Minister's shambles. He has options in front of him."

Green Party MP Gareth Hughes said so many people had engaged with the flag process through the Red Peak flag design and it was important those people got to have their say.

Red Peak petition organiser Rowan Simpson said Red Peak was a great design so he was not surprised it was resonating with people.

All supporters wanted was for Red Peak to be included in the short-list so New Zealanders had more choice, he said.

Another supporter of the flag, Antony Jackson, said he liked the design because it did not look like a logo.

"There's a story behind it. I can see so many motifs that I feel attached to it. It looks like a flag," he said.

The Labour Party and the Government remain in a stand-off over the flag referendums.

Prime Minister John Key said he was open to meeting with Labour leader Andrew Little to get support for a law change to include a fifth design, if they supported the process.

But Labour said it would only support a law change if voters were asked in the first referendum whether they want to even change the flag.