Women are frequently warned "not to leave it too late", but should more effort be expended warning men to have children while they are young? 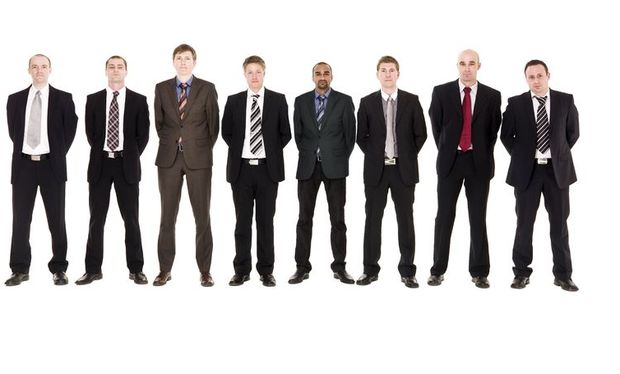 Although they don't receive the same media attention as the female equivalents, a plethora of studies show that men take risks by waiting to have children.

As men age, the quality of their sperm deteriorates, increasing the chance that a pregnancy will end in miscarriage or the baby will have Down syndrome or other genetic abnormalities. A recent study showed that almost half the cases of Down syndrome in children born to women over 35 are likely to be sperm-related.

"I don't know that people need to be worried about it, but they certainly should be aware of it and aware of the associated conditions in children: schizophrenia, dwarfism... There's evidence about impaired child development, which is more common in older men."

"And older men's partners take longer to conceive as well, which is to do with sperm quality," he says.

Sperm quality deteriorates so much over time that many countries prohibit men from becoming sperm donors after they reach a certain age. In New Zealand, clinics want men donating to strangers to be under 45, but prefer them to be under 40. Other countries take a harder line: the UK's guidelines encourage an upper limit of 41, while in Israel it is just 30.

While the potential for issues with pregnancies increase as men age, so do the odds of infertility: as age goes up, testosterone goes down. Men over 35 are twice as likely to be infertile as men under 25. And between 35 and 50 percent of infertility cases are sperm-related.

Still, while the risks may be higher, the majority of men are still fertile up to the age of 60 - and sometimes beyond.

Is that your father or grandfather?

Going beyond conception and into the playground, children with older dads sometimes suffer the embarrassment of having their fathers mistaken for their grandfathers at the school gates.

More importantly, they can wind up being short-changed in terms of the number of years they have with their father. 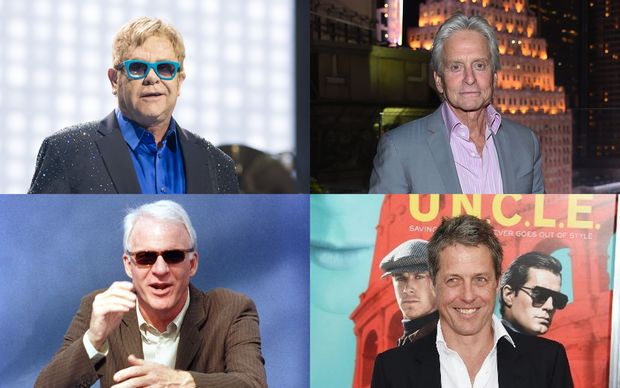 Many celebrities have chosen to have children later, including Elton John, 66; Michael Douglas, 58; Steve Martin, 68; and Hugh Grant, 51. Photo: AFP

Auckland-based family therapist Suzi Wallis says that while there are positives to having children later in life, some older parents struggle with having enough energy to parent very young children.

"In terms of energy, there's the question of who's getting up for night-time feeds, whether they've still got enough left over at the end of the week," she says.

Older parents can even find their learning styles differ greatly to their children's.

"The learning style that I've noticed with younger people - they can really truly do many things at once with lots of distractions, which lots of older people who have grown up in that one-thing-at-a-time context just can't do.

"If you've got someone who's over 45 and then you've got a child who's doing multiple things at once - there's the issue of not being able to relate to their learning style."

Technology hasn't just affected how we learn, however, but how we interact, she says.

"The classic one with teenagers at the moment - many older people find it rude often if someone's doing something else at the same time, like texting or using your phone during a conversation, whereas for many teenagers that's just completely normal. You can get that disconnect between values and manners."

These are all issues that affect older mothers too, but while they are often judged for the issues they create for children, men rarely are.

A survey by the UK newspaper The Telegraph of over 10,000 people found that 65 percent thought that women over 65 should not "be allowed" to have a child through medical intervention, while stories about older mothers often attract damning comments. 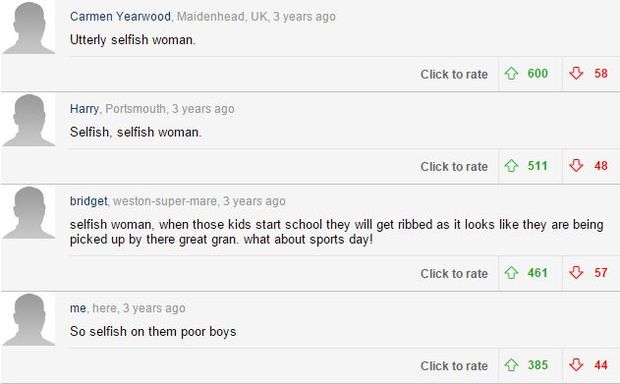 Comments from the Daily Mail on a story about a 65-year-old new mother. Photo: Screenshot

Associate Professor of Sociology Dr Karen Throsby, of Britain's Warwick University, found that "while the female partners are criticised as selfish for risking the increased possibility of not living to see the child to adulthood, or of not having the energy to care for them, the male partners do not receive similar negative attention.

"In fact, older fathers find themselves congratulated for their virility, as was the case in February 2000, when James Doohan (Scotty, from the Star Trek series) announced at the age of 80 that he was going to be a father again. The BBC could not resist trumpeting that he was preparing 'to boldly go where few men of his age have gone before'."

Ms Wallis says the same attitudes are prevalent in New Zealand. "I think it's a complete double standard. We focus more on women's ability to reproduce but I think there's less interest in men because their role isn't so visible - women's reproductive journey is just more obvious, in terms of pregnancy."

She says the imbalance is also partially because many are unaware of the risks involved in fathering children late.

Many men oblivious to the risks

Computer programmer Jeff McClintock, 50, hadn't heard about the risks associated with fathering children later in life until he and his wife began attending Plunket antenatal classes. Mr McClintock and his wife, who is five years younger than he is, have two children aged 5 and 10. He said that there wasn't much "nagging" from family members to have children, although his mother did raise the issue a few times before their first child, Violet, was born.

He says as a slightly older dad, the most difficult thing is mustering the energy required for parenting.

"I'm a bit jealous of people who have them younger - they can go out all night and then go to work and then they're fine, whereas when you're 50, you feel like you've been hit in the head with a sledgehammer and need a week to recuperate," he says.

"Before you have children, some of the hardships are hard to imagine. Nights and nights of sleeplessness with a crying baby can be incredibly stressful."

Mr McClintock's parents are in their 90s, which makes turning to them for intergenerational support more challenging. "I can't just drop the kids off for babysitting. It's too hard for them [and] makes our workload greater and more stressful.

"They're at the stage where it's quite hard for them to lift a child up - it's actually quite challenging for an 80 or 90-year-old to lift up a toddler if they fall over or need their nappy changed, so it felt a bit unfair to ask," he says.

Dr Fisher hopes that increased awareness of the risks will lead to a generalised shift in when both men and women choose to have children.

"It's all part of the whole change in social circumstances of people choosing to have children later - but just as women need to have an awareness that as they get older that their fertility decreases and the chances of chromosomal abnormalities increases, the same is true for men.

"The information probably won't make a fundamental change to individuals, but I'd hope that over time there'd be a social change in when feels like right time to conceive, so that men and women start choosing to have children earlier.

"There may never be a 'right' time to have children, but there certainly is a biologically better time to conceive," he says.