A Porirua family took in a baby so neglected he showed no emotion. Now he's full of life. They also took in a baby born at 25 weeks and turned her into a happy, healthy wee girl who's off to school soon. 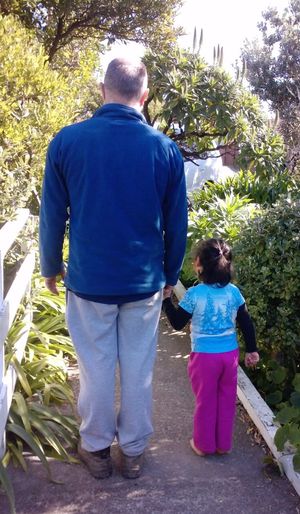 Jude Pointon's husband and one of the children they care for. Photo: Supplied

And because they've taken on the children permanently - giving both them and the children the security of knowing they have a family for life - they lose all Child Youth and Family Service (CYFS) support and allowances and receive just $19 a day per child from Work and Income.

They can't change the children's surnames, they can't take them out of the country without permission and, if their birth parents want contact, they have to make it happen.

"So why would anyone sane do that?" carer Jude Pointon says.

"The only people who would do that are people who have had a background like mine [Jude was fostered and adopted as a child], who have gained through having a background in fostering or adoption."

In his first annual report on CYFs, State of Care 2015, released today, Children's Commissioner Russell Wills found systemic failures in the service and said it was doubtful children were better off in state care.

He strongly criticised CYF for what he calls a "dump and run" culture of neglect.

Jude and her husband have first-hand experience of that culture.

Before they became permanency carers, they fostered children and Jude tells of having siblings aged one and three in their care for two months, who then had to go back to their parents for a few days because CYF didn't have its court documents in order.

"I said 'what do I tell them? They need to know what's happening,' and they said 'tell them they're going for a ride in the car'.

"So I had an absolute hissy fit ... and said 'that's not okay, the system is making me into a long line of adults who have failed these children and we're creating this country's future criminals and they have been let down over and over and over again'."

Jude told the social worker they would have the kids back when the situation was sorted, but, she says, because she had spoken her mind the children were sent to another home.

"And that happens over and over again," she says.

Jude's sister - a social worker and CYF emergency care foster parent - recently had two children arrive in the middle of the night. They were with her for a few days but then weren't returned after school one day.

"She was told 'they've gone to another placement' and she said 'well that's really not okay because they were told they were coming here, they've had an unsettling time and suddenly they're not coming here, they're going somewhere else they don't know, again and all their precious belongings that they've managed to take from their home are here'."

Those belongings might just be a teddy bear or a book but to a child with nothing they are everything.

Jude's sister arranged a meeting with about 20 Porirua social workers and she, Jude and another foster parent told them what was wrong with the system.

"Some of them were actually shocked to hear from a carer's perspective how it feels to the carer and the children," she says.

"It makes me annoyed because the foster carers and the permanency carers are the experts. Sure, the children who have been who've been through the system are the experts but often they're too young to put across coherently their point of view.

And that, simply, is Jude's message to the powers that be who want to fix the care system.

"Listen to the foster carers and ... the permanency carers, because we are here every day dealing with it every day, and we know what can be done to try and fix the situation and make it work for these vulnerable children.

Minister must step up

Former ward of the state Tracey said the State care system was broken beyond repair.

Tracey was removed from her family in the late 1970s when she was 11 because of abuse and said she lost track of how many foster homes she lived in.

She told Checkpoint nothing has changed.

"They've lost track of over 1000 children - they don't know where they are, what's happened to them.

"How can you lose 1000 kids? The Minister of Social Welfare is their guardian, is their parent, so that person has better step up and look after these kids."

Tracey said society would have to live with the consequences if children in care were not properly looked after.

Another former ward of the State, Tupua Urlich, said more support was needed for people when they left care.

Mr Urlich said although he felt like a prisoner when he was in care, he had no support when he left and developed alcohol and drug problems. He also tried to take his own life.

People needed a home environment to fall back on well into their 20s.

"The average age of leaving home in New Zealand is 23. You have the luxury of being at home, parents helping you out," he said.

"I know some people will hear this and think 'I didn't do that for my children' - sure but at least they knew they had the option of going home, getting their washing done, getting given a meal or support, real important things."