Chunuk Bair - the name conjures up great heroism, success and ultimate defeat on the battlefield that was Gallipoli.

Saturday marks the 100th anniversary of the attack on Chunuk Bair, one of the highest points on the Gallipoli Peninsular. 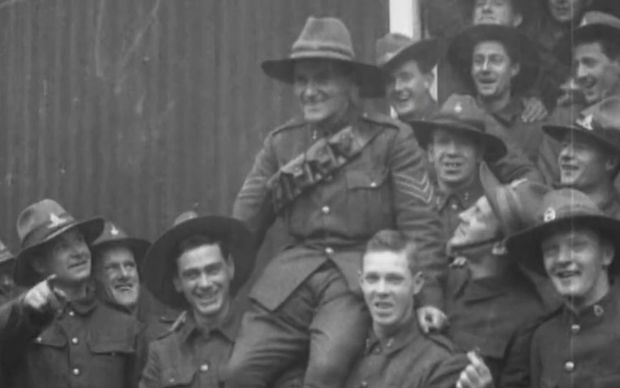 Corporal Cyril Bassett of Auckland, after being awarded the Victoria Cross for his actions on Chunuk Bair. Photo: http://anzacsightsound.org

A service will be held there at the New Zealand Memorial and will be attended by hundreds of New Zealanders.

Cyril Bassett was the only New Zealander to receive a Victoria Cross at Gallipoli.

He spoke about his experiences in 1959.

"Chunuk Bair was ordered to be taken at all costs and the Auckland battalion was allotted this task.

"I do not think they had any clear idea of what kind of ground they had to go over or what was before them. They gallantly attacked across an open space that was split by fire from all sides," he said.

"Turkish reserves had manned the heights in front and were sweeping with rifle fire, and the consequence was they were practically decimated."

The attack began on 6 August.

It started well, with men from the New Zealand Mounted Rifles Brigade and the Maori Contingent clearing the way for the assault columns, but delays meant the attack on the summit was ordered before all of the infantry were in place.

The Auckland Battalion tried first and failed, and then overnight the Wellington Battalion occupied the summit, and were joined by the Otago Battalion.

They managed to hold it, but on the night of 9 August, after being relieved by British soldiers, the Turks launched a heavy counter-attack and regained Chunuk Bair.

It is estimated that nearly 900 New Zealanders died.

Military historian Ian McGibbon said that even if Chunuk Bair could have been held, there was not much that could be done with it.

"The main high points were still in Turkish hands. We managed to capture Chunuk Bair, but we really needed Hill 971 which actually dominates Chunuk Bair. The Turks were still on our flank on higher ground."

He said it was a sad fact of life that men were sacrificed taking ground that would not lead to victory. 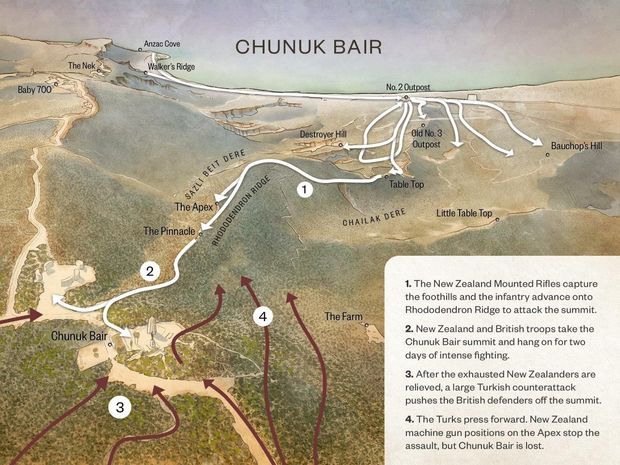 "[It] was very ambitious plan basically to capture the three high points on the range in one night, and present a fait accompli to the Turks - then possibly we may have had a winning hand."

"While it was still dark we went uphill again but more to the left and mounted the gun on the crest of the ridge running up to the peak of Chunuk Bair.

"On the right across a fairly deep gully was another shrub-covered ridge. This was evidently held by the Turks because most of the fire that started with daylight came from that direction.

"It began with the dawn and increased as the light grew stronger until, at full daylight, there was so much noise it was difficult to hear one's own voice," he said.

Professor of War History at Massey University Glyn Harper described the battle as the defining point for New Zealanders at Gallipoli.

He said the result could have been different if there had been a skilled commander on the ground, if the assault had been done in stages, and if the troops had been looked after better.

"Basically these troops had been on the front-line for months on end being fed bully-beef and biscuits and tea as their main diet.

"Most of them, in fact 85 percent of them, were suffering from dysentery. Not a few, I suspect, had scurvy and other illnesses, and this was a challenge for even fresh, experienced troops." A group of soldiers share a meal of bully-beef and biscuits on Gallipoli. Photo: Bob Jackman

Professor Harper said the odds were stacked against the Anzac troops in the August offensive.

He said there wasn't really much of a plan for what was going to happen next after Chunuk Bair.

"They still had a long way to go before they reached the Narrows (Dardanelles).

"Being able to see the Narrows doesn't make it any easier to get there, and there was considerable, what the infantry called, tiger country to cross - hills and gullies which would be fiercely defended by the Turks.

"The key thing a lot of people miss is the logistical difficulties of sustaining the advance beyond that ridge line," he said.

The Maori Contingent, sometimes called the Native Contingent, was split among the three New Zealand mounted rifle regiments at Gallipoli.

Seventeen men of the Maori Contingent were killed.

Dr McGibbon said the contingent arrived in July, and their first major engagement was to help capture three key positions on the foothills before the attack on Chunuk Bair could begin.

"Later, they were brought back together and went up to The Farm, and were there just below Chunuk Bair during the period that we held the top, and they were back in the Apex when the Turkish counter-offensive came over the top.

"They acquitted themselves very well, and all the troops were very admiring of their fighting qualities," he said.

Commemorations to mark the centenary of Chunuk Bair will be held next to the New Zealand Memorial and will be attended by Governor General Sir Jerry Mateparae and many New Zealanders who have made their way to Gallipoli.

A National Ceremony will be held at Pukeahu National War Memorial Park in Wellington tomorrow at 4pm.

The historical audio is courtesy of Nga Taonga Sound and Vision.