The biggest-ever cruise ship to visit Auckland will have to moor in the Waitemata Harbour and ferry its nearly 5000 passengers ashore. 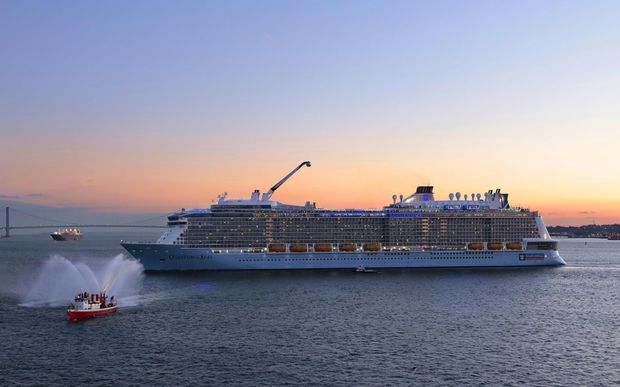 Ovation of the Seas will be similar in scale to sister ship Quantum of the Seas, pictured here. Photo: Supplied

The unusual arrangement for the Ovation of the Seas has been reached after months of negotiation between Auckland Council, its port company and the cruise line Royal Caribbean.

The mega-liner is too long for Auckland's cruise ship wharves, and Ports of Auckland ended the practice of berthing the biggest liners at its Jellicoe cargo wharf after the Council put pressure on the port to scrap one of two controversial wharf extensions.

Royal Caribbean said while mooring the 348-metre ship in the harbour was less convenient than berthing, it's normal for some of the ports it visits.

"In fact there are a number of cities in the world that we've done it, on occasions even in Sydney, so it's definitely doable in a city," the line's commercial manager Sean Treacy told Radio New Zealand.

Auckland Council's tourism agency ATEED is delighted to secure the stopover by the ship which is still being built in Germany. It does not consider the harbour mooring as a bad look.

"Our plans for building new facilities for these ships won't be ready in time for 2016-17, so in the meantime we think it's a good option, and is done at other ports," said ATEED's chief executive Brett O'Reilly.

Royal Caribbean said "Ovation of the Seas" would use its six tenders to bring passengers ashore.

The two transit stopovers in December 2016 and January 2017 don't involve passengers starting or ending their cruise, so there will be no baggage to ferry.