Ports of Auckland is set to turn away one of the world's largest cruise ships after agreeing with its council-owner not to build one of two planned wharf extensions.

It said, without the extension, it could not berth the Ovation of the Seas, which means the mega-liner may also drop stops at four other New Zealand ports.

The 5000-passenger liner, which enters service next year, was pencilled in for four visits to Auckland the summer after next.

Ports of Auckland said it would have berthed at the Bledisloe Three extension, which it has now agreed with its owner, the Auckland Council, not to build for now.

That followed a four-week stand-off, after councillors were taken by surprise in February with news that the extensions would reach nearly 100 metres into the harbour.

The port company said the only alternative was the general cargo Jellicoe Wharf, but it could not afford to keep the wharf clear of cargo for five days around each of the cruise liner's four tentative visits. 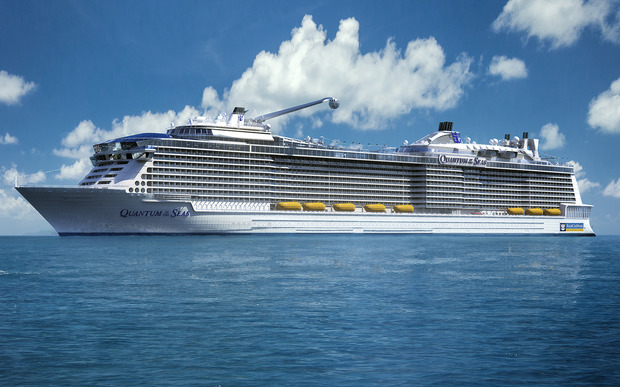 An artist's impression of 'Ovation of the Seas', which is being built in Germany. Photo: AAP

Craig Harris, the managing director of the ship's port agent ISS-Mackay, said the season would have been worth an estimated $12 million dollars to Auckland and $40 million for the country.

Mr Harris said the Auckland stop was called a "passenger exchange" and was critical to Ovation of the Seas coming to New Zealand.

"If the ship can't get into Auckland, and Auckland is required because there's 5000 passengers, going through airport and hotels, the ship won't come to New Zealand at all," he said.

Auckland's deputy mayor Penny Hulse said the council understood that the compromise of allowing just one of the two proposed extensions would affect some cruise visits.

"We're looking at some other and alternative arrangements for cruise ships, and we think we might be able to accommodate one or two of those," Ms Hulse said.

No Auckland, no industry - Cruise NZ

A cruise ship industry body said New Zealand would not be a destination for mega-liners as long as the ships could not berth in Auckland.

Cruise New Zealand chairperson Kevin O'Sullivan said the industry was told facilities would be available regardless of whether the extensions were delayed.

That would have been at the port's cargo wharf.

Now, Mr Sullivan said, the port has told them that was not going to happen as the port's normal cargo work would take up all of the available space.

"What's good for Auckland in terms of cruise shipping is good for the economy of New Zealand," he said.

"If we don't have Auckland, then essentially we don't have a cruise ship industry, so we really need to be working towards some arrangement with Ports of Auckland."

The Royal Caribbean Cruise Line, which owns Ovation of the Seas, will be in the country next week on a planning visit.