A Whangarei man who drowned his partner after years of abusing her will spend 15 years in prison before he can seek parole. 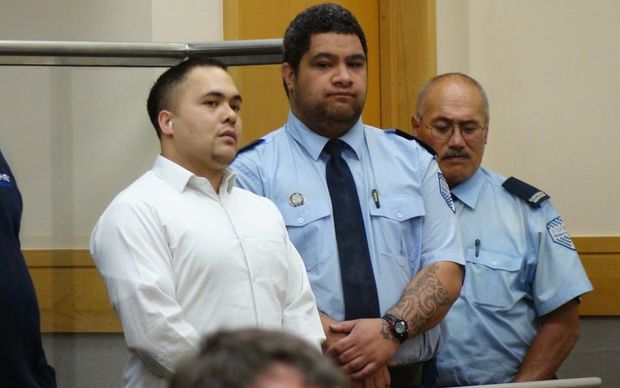 James Akuhata sentenced to life in prison in Whangarei today will serve a minimum of 15 years behind bars. Photo: RNZ / Lois Williams

James Akuhata, who's 32, was sentenced to life imprisonment this afternoon in the High Court at Whangarei.

He pleaded guilty in March to the murder of Ashlee Edwards, the mother of his two young children, who was 21 when he killed her in July 2012.

The couple had left a party after they argued, when he objected to her texting a friend.

Akuhata admitted he'd thrown Miss Edwards off a bridge in central Whangarei, then climbed down the bank and held her head underwater until she drowned.

Justice Ellis noted Akuhata had been left mentally impaired after he was assaulted in prison, following his arrest - but had been found fit to stand trial, before his late guilty plea.

She said Ashlee Edwards had become stuck in a cycle of abuse like many victims of family violence, and Akuhata had still not accepted he alone was to blame for her death.

The judge said the relationship had been an on-again, off-again one over six years, and in that time Ms Edwards had taken out protection orders for herself and children against Akuhata.

She said the order had not been in force on the night Ashlee Edwards was killed because she had agreed to go with Akuhata to the party at a local nightclub.

However police believed CCTV footage of the couple walking away suggested Ms Edwards did not want to be with him.

Justice Ellis said she hoped Akuhata understood the truly dreadful thing he had done in depriving Miss Edwards' family of an adored granddaughter, daughter, and mother whose pain had not lessened with the years.

Speaking after the sentencing, Ashlee Edwards' mother, Karen Edwards, said the family was grateful for the life sentence and 15-year minimum term.

She said Akuhata had manipulated, controlled and abused her daughter and had also damaged his own daughters with his evil behaviour.

Mrs Edwards, who's now raising her daughter's children, urged the families of those affected by violence to speak out, put a stop to it, and get their loved ones out to safety.