Ten people have died on the roads over the weekend and police and a road safety charity say more needs to be done to bring the road toll down.

Police have confirmed two men died on Sunday afternoon in a collision on Christchurch's northern motorway. 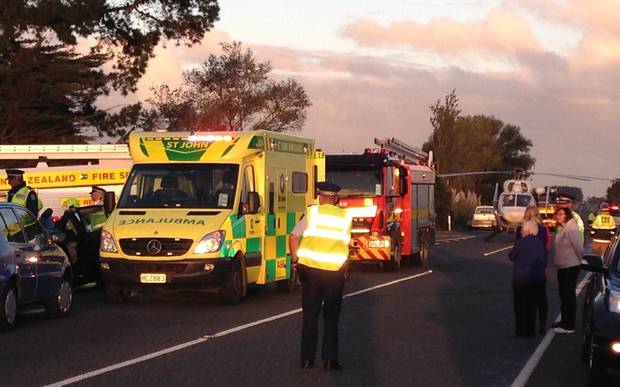 Three Auckland women from the same extended family were killed in a collision at Te Puna, near Tauranga. Photo: SUPPLIED

Eight others died in four separate road crashes on Saturday and 17 people were hospitalised, some with serious injuries.

The carnage began when a head-on collision in the Manawatu town of Marton about 4pm on Saturday claimed three lives.

Two of the victims died at the scene and the third later, in hospital.

Four people remained in Palmerston North Hospital and police are still looking for a white van that may have been in the area at the time of the crash.

About three hours later, three Auckland women from the same extended family died in a fiery collision between a car and a minivan in Bay of Plenty.

The women, aged 32, 45 and 71, were in the van with six other people when it and a car carrying two people collided on State Highway 2 at Te Puna, just after 7.30pm.

Both vehicles and a tree were engulfed in flames.

Five others involved in the crash - including a small child - were taken to Tauranga Hospital with injuries ranging from moderate to serious.

At about 9pm, a motorcyclist also died, in a crash involving four cars in Warkworth, north of Auckland.

The driver of one of the cars was taken to North Shore Hospital with moderate injuries.

'We've still got a long way to go'

Police said the deaths of at least eight people on the roads in less than 24 hours was a shocking toll not seen for at least 30 years.

The assistant commissioner for road policing, Dave Cliff, said it reminded him of the terrible days of the 1970s and '80s, and hundreds of people would be affected by the premature deaths.

Mr Cliff said most crashes were preventable and more needed to be done to reduce the trauma on the roads.

He said it was clear removing roadside hazards such as power poles and culverts, reducing rural speed limits and installing median barriers have enormous benefits.

Road safety charity Brake said key safety messages simply weren't getting through to people and agreed not enough was being done to make roads safer.

Sunday marked the end of a global road safety awareness week - and the charity said it was disappointing to be ending it with so many road fatalities and injuries.

Brake director Caroline Perry said it was heartbreaking some families would be dealing with the loss of loved ones this Mother's Day.

"We've still got a long way to go to prevent injuries on our roads and we have to keep reminding everyone of the road safety messages and to think about road safety year round - not just in Road Safety Week but way beyond that."