The woman behind the WWI Remembered: A Light and Sound Show in Wellington wants to take it around the world, now that its run at the Pukeahu National War Memorial Park is coming to an end. 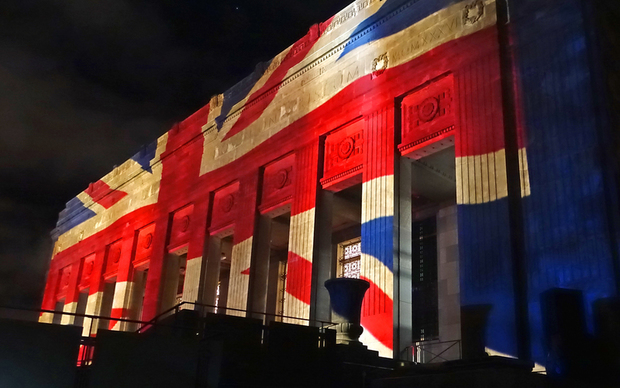 Getting there Photos of New Zealand troops, from their days as Military Cadets, on their journey to Egypt and the landing at Gallipoli.

Being there The hills and valleys around Anzac Cove were an inhospitable environment, the land harsh and rugged, and war imposed its own mark.

Faces of Gallipoli The men and women of WW1 look back at us after a century, so we can remember them.

The show is a Wellington City Council project, and the whole park was finished just in time for it to start a week ago, and Tony Abbott opened the Australian war memorial on Monday.

The Carillon Bells of the National War Memorial rang out across the hillside every evening this week.

It's the first time they've rung for three years, because of the renovations and road works surrounding the Pukeahu National War Memorial Park. 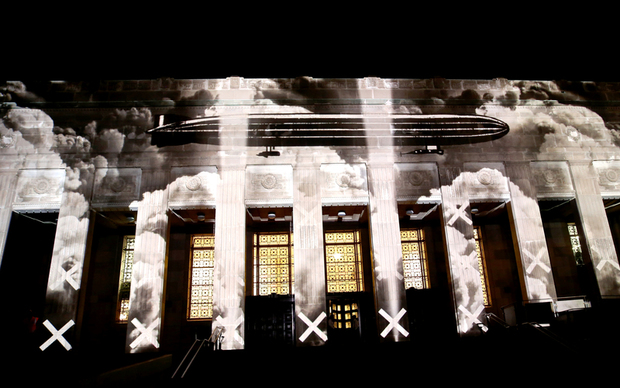 As the bells toll on, simple patterns of crosses and poppies flow across the face of the 50 metre high war memorial, blending with pictures of soldiers and fantails.

Just behind the War Memorial sits the old Dominion Museum at Massey University.

Projected onto its facade in a separate 15 minute show are over 200 grainy images and film of soldiers and war, weaved in with colourful pacific and Maori patterns. 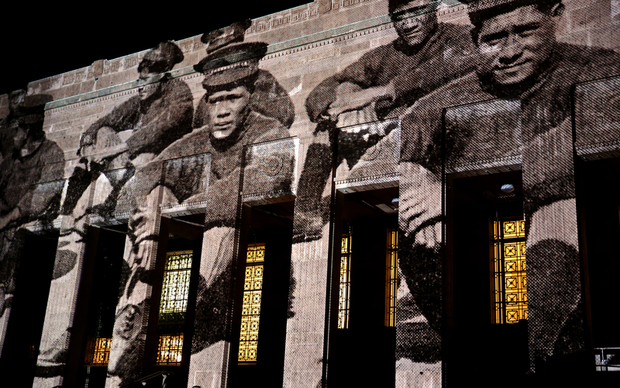 The original music is from composers Iain Gordon and Aaron Tokona.

Among those watching is Michel Tuffery, one of the artisits who wove his talent and Samoan heritage into the graphics.

"It's all carefully been put together in a narrative way, but then you get a Hammond painting up now, it just beautifies the whole building architectually. It's trying to put those beautiful images, sad images in a way, and acknowledge those woman and children from the past that were part of that confilct too." 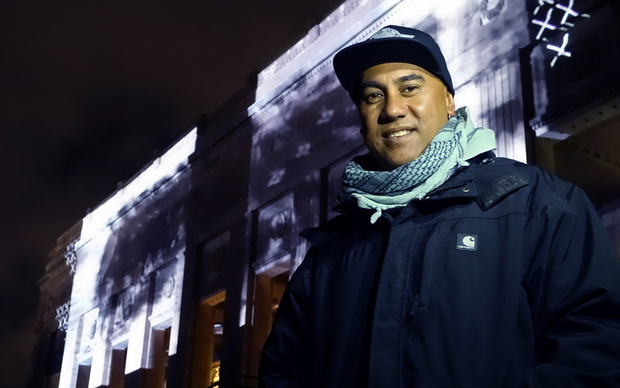 Michel Tuffery, one of the main artists of the WW1 Remembered: A Light and Sound Show. Photo: RNZ / Alexa Cook

The show moves on through the Gallipoli campaign and the Anzac relationship, to the history of conflict, resolution and peacekeeping.

Michel Tuffery says it has been a team effort between researchers, composers and Maori artist Ngaitai Taepa.

"I think it's an awesome tribute. Here we go, the fantail again - Ngaitai was saying it's the way it moves and steps around, negotiating between death and also the picking off the insects and the way they dance using the taiaha in their step". 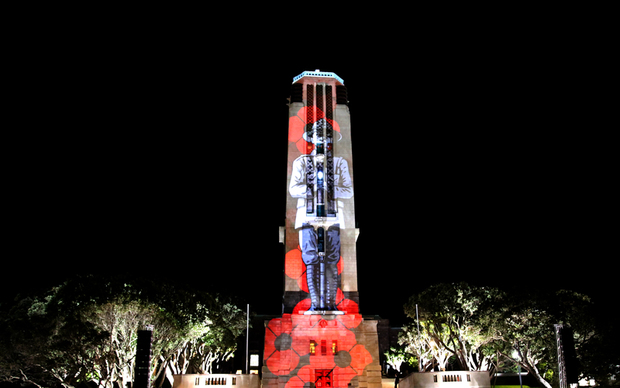 Ron Turner had been along on an earlier night - he served in the Vietnam war in 1969 and is the President of the Wellington RSA.

He is not sure how the Light and Sound Show is going down with younger audiences, but he found it touching.

"For me, as an individual, it was very moving - you know, I looked and saw the poppies float across the columns of the National War Memorial building, and the faces of individuals and other pictorial events. Everything brings back a memory".

Sarah Hunter is Director and Producer, and has been to every show this week.

"People have walked away feeling really proud, inspired, emotional. What more could you ask for? I think we're very lucky. I'd love to take this around the world as a little pop up light and sound show. I think it would transport really well. It's engaging enough for people to understand, and if you don't know the stories you'll want to know more and research it."

The projectors themselves are fairly compact - though the one throwing images 130 metres out on to the Carillon from Mount Cook School required a lens imported from Amsterdam.

Inside the old Dominion Museum, in the Great Hall, is Peter Jackson's Great War Exhibition which is staying put for four years.

However, tomorrow is the last evening of WWI Remembered: A Light and Sound Show.