A GNS scientist says an earthquake which hit the East Coast of the South Island yesterday afternoon is not connected to other quakes that hit the area this week.

The magnitude 6.2 quake felt across New Zealand was described as "huge" and "quite solid", leaving some "seasick". 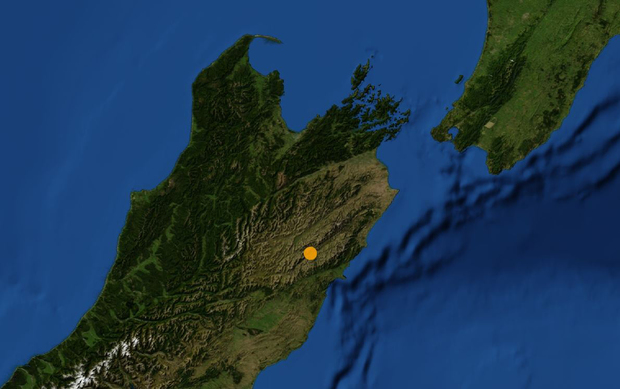 The quake, which struck at 3.36pm, was centred 35 kilometres north-west of Kaikoura, on the east coast of the South Island, at a depth of 83km, felt at least as far south as Christchurch and as far north as Raglan.

If you felt the quake and would like to share pictures or video with us, please email it to: iwitness@radionz.co.nz

Following the larger quake, there were three smaller earthquakes in the area so far, ranging between magnitude 3.5 and 4.2.

While Victoria University seismologist John Townend said it was probably linked to two other nearby earthquakes this week, GNS scientist John Ristau disagreed.

He said the shake was further south, and much deeper than the earlier quakes.

"This one was a bit further south and about 20 or 30 kilometres deeper than the earthquake yesterday and also compared with the ones in July-August 2013, so it's unlikely they are connected."

He said the quake was roughly the same size as the February 2011 quake in Christchurch - but this one was much deeper.

Professor Townend earlier said the earthquake was probably linked to two others that struck the middle of the country this week.

"All of the earthquakes are probably related somehow, it remains to be seen exactly how yesterday's earthquake for example are related to the ones this afternoon.

"But certainly the waist of the country has seen quite a lot of activity over the last couple of years."

He said the quake was "reasonably large" and rare.

"On an average basis we get about two earthquakes of this size, between six and seven, every year. It's not that we don't have them - they're not that common."

Mr Townend said residents could expect aftershocks, which were generally smaller in size.

"But we can always anticipate seeing something a little bit bigger," he said.

Emergency services said there had been no reports of injuries or major damage as a result of the quake.

St John South Island spokesperson Ian Henderson said no reports have been received of injuries but he was advising people to check on their family, friends and neighbours.

The Transport Agency sent contractors to check out reports of a slip on State Highway One between Kaikoura and Cheviot.

Thousands of people across the country reported on GeoNet that they had felt the quake.

There were no immediate reports of any major damage.

People on social media responded to the earthquake, with Sandra Bell writing "I felt seasick from that, yuk," on the Rebuild Christchurch Facebook page.

That was a goodie #quake

Radio New Zealand staff in Christchurch and Wellington said they felt the quake.

Kaikoura's mayor, Winston Gray, said council staff ran out of the building when they realised the shake was getting stronger.

"Well, initially, we were up on the second floor and felt a slight movement, we thought, 'that's okay, that's it,' so we just took our seats, then it came on - to me, it was a rolling motion, quite firm, quite solid."

Mr Gray said people were calling in with reports of minor damage. 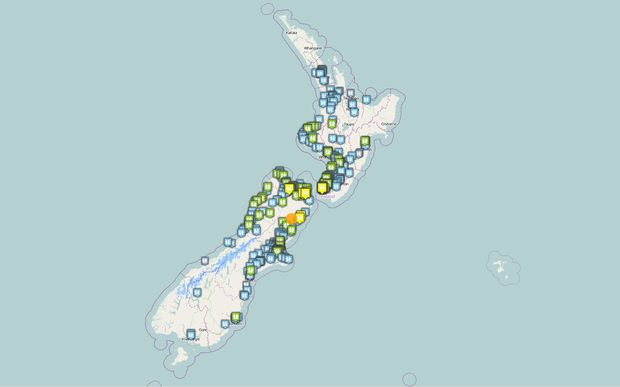 The store manager of Mitre 10 in Kaikoura, James Hills, said as soon as it struck, people fled the store.

"Fair bit of panic - get out of the shop, everything was falling off the shelves. There's been a little bit of damage, certainly not heaps, but yeah, there's a lot of stuff fallen over."

He said that the quake felt violent.

Staff at the Alpine Lodge in St Arnau in Nelson Lakes said apart from a few broken bottles in the chiller, they seemed to have escaped damage from the quake.

Sue Burrowes, also in Nelson, felt a "very strong jolt, followed by a roll for many seconds up here in the hills above Wakefield, Nelson, pretty scary really." She said she was checking for damage.

"My husband and I had just woken up from an afternoon sleep, and then the earthquake took us east to west, sort of a rocking motion on the bed, and then a jolt north to south. It started off very softly and then gradually got stronger, so we got quite a little shock."

Ms Pascoe-Clarke said her and her husband would be stocking up on supplies.

Well, a long, shaking, rolling quake is one way to beat that Friday afternoon fatigue.

Feeling sea sick in my office with that earthquake.

A staff member at the Hampden Hotel in Murchison, in the Tasman region, said the pub was busy when the earthquake hit, but many tourists did not realise it was an earthquake.

"I was thinking, 'What are you doing and can't you feel that?' It was huge here."

A Christchurch police spokeswoman said no earthquake-related call outs had yet been received.

The quake shook the Hanmer Springs area quite severely, but damage is believed to be minimal.

Chelsea Duckmanton, who works at the Hanmer Springs Hot Pools, said the earthquake lasted about 30 seconds and left those in the pools wondering what was happening and everyone was stunned.

She said they were now cleaning up the mess.

"Quite a few pieces have fallen off the shelves in our shop, anywhere else I'm not entirely sure, but yeah, we'd definitely noticed a few things freestanding on the floor now and we're just picking them up."

The Four Square supermarket in the township lost some stock but no serious damage was experienced.

A spokesperson for the company said there was no damage to the network itself, but there was just "congestion" from people calling each other at the same time.

He said that they were still investigating the root cause of the problem, but, in the meantime, customers should avoid making non-essential calls and services will return to normal.

A spokesperson said reports of minor slips were being checked, but a report of a major slip on State Highway One between Kaikoura and Cheviot has proved untrue.

Popular tourist rail services in the South Island have also been suspended.

A KiwiRail spokesman said all rail services from Picton to Christchurch and from Christchurch to Arthur's Pass have been suspended, pending safety checks to the rail tack and infrastructure.

The Coastal Pacific service has been halted at Kaikoura, while the TranzAlpine has stopped at Arthur's Pass.

Tranz Metro services in Wellington were temporarily suspended but have since resumed following the completion of safety checks.