The small Seddon community came together on Saturday to mark the one-year anniversary of a series of earthquakes, which damaged almost every home in the township. 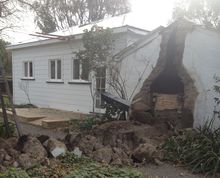 Residents from Seddon and nearby Ward gathered at the Seddon Domain, along with the emergency response, council and Government agencies who helped them in the aftermath of the 6.6 magnitude quake.

Although no lives were lost, the earthquake was the largest of a swarm of quakes to affect the upper South and lower North islands and was second only to the Canterbury quakes for the number of damage claims received - over 12,000.

One year on, almost 80 percent of the town's EQC claims have been settled.

The event's organiser and the co-ordinator of the Awatere Community Centre, Marie Flowerday, said Saturday's event was to celebrate the response to the quakes and remind people to be prepared for any future events.

EQC national operations manager Barry Searle said all claimants should be paid out by the start of next year.