Customs says it will have a new electronic system in place by the end of the year to try and identify substances posted to New Zealand. 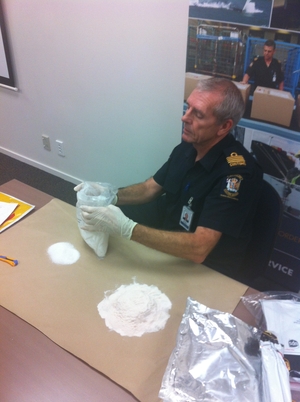 The number of cocaine "catches" in mail centres has increased from five in 2011 to 54 last year.

Customs' manager of cargo operations, Bruce Berry, said Customs, the Ministry of Primary Industries and NZ Post would update their technology to align it with international systems.

"It would mean some parcels would be electronically manifested, so we would have advance information in terms of addresses, names, that type of thing, of the addressees of the parcels, so we would be able to then run some assurance models over those."

He said the packages typically contained only small amounts of drugs, which suggested people were buying for personal use rather than large operations.

Meanwhile, the Drug Foundation said a new approach was needed to educate people who were buying drugs online, instead of old-fashioned law enforcement.

Customs said the spike in the amount of drugs being posted to New Zealand was a result of them being bought online.

Drug Foundation spokesperson Ross Bell said the problem was spiralling out of control with new websites popping up as others were shut down. He said the foundation wanted to approach the websites directly so they could inform users about the risks.

"We could be working with the hosts of these websites to use those sites themselves as a channel to get good information to these quite sophisticated consumers of these substances.

"And then for Kiwis who haven't traditionally got their hands on a lot of heroin or cocaine - these are old drugs but here are the real health risks."