Bookmakers in New Zealand and across the ditch are picking Australia as the likely winner of the Cricket World Cup.

The TAB has Australia as favourites for the trans-Tasman battle at the Melbourne Cricket Ground on Sunday at $1.46 and New Zealand at $2.55.

The odds were similar at Australia's Centrebet, with Australia at $1.42 and New Zealand at $2.90.

TAB's spokesperson Mark Stafford said despite it being a fairly even match, a bigger, home ground was in Australia's favour.

"If you go bowler for bowler, we might have the edge on them. Batting-wise, they probably bat deeper but we've got more explosiveness," he said.

"It's hard to weight up, but I think we've done the right thing making Australia favourites." 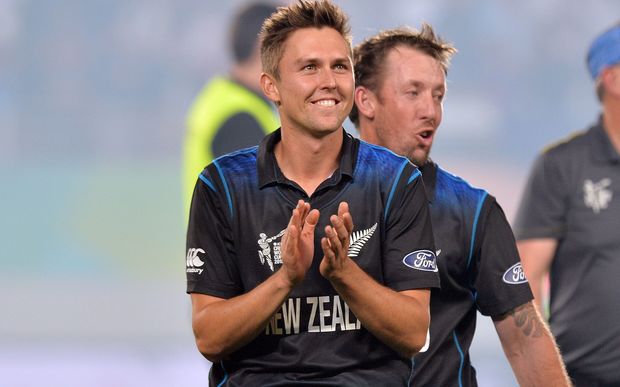 Trent Boult is tipped to be the top wicket taker. Photo: AFP

But Mr Stafford said he didn't expect the same fluctuation in the final, saying New Zealand would have to do something "pretty special".

"If we bat first and we're 100 without loss off 12 overs or something then you could see us swinging into favouritism ... I don't expect [it], unless there is an explosive start for New Zealand."

Brendan McCullum and Steve Smith were the favourites for highest run scores at $4 each, while the top wicket taker was Trent Boult at $2.75.