Early morning rain has cleared and play is expected to start on time at the Auckland grounds at 2pm. 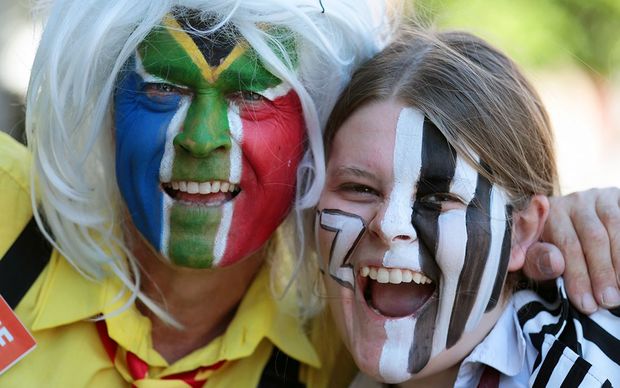 A South African and New Zealand fan ahead of the semi-final match at Eden Park. Photo: RNZ / Diego Opatowski

This will be the seventh World Cup meeting between these two sides with New Zealand having won four of the previous six encounters.

The last time the two sides played a World Cup match was a 2011 quarter final in Dhaka when the Black Caps won and advanced to the semi finals.

The winner of this match will create cricketing history for their nation, with neither side having qualified for a World Cup final. The victorious team will play either Australia or India which are contesting the second semi-final in Sydney on Thursday.

In downtown Auckland, people have started arriving at the fan zone at Britomart, ready to watch the match on the big screens. Fan zones are also being set up at Wellington's Civic Square and Victoria Square, Christchurch. 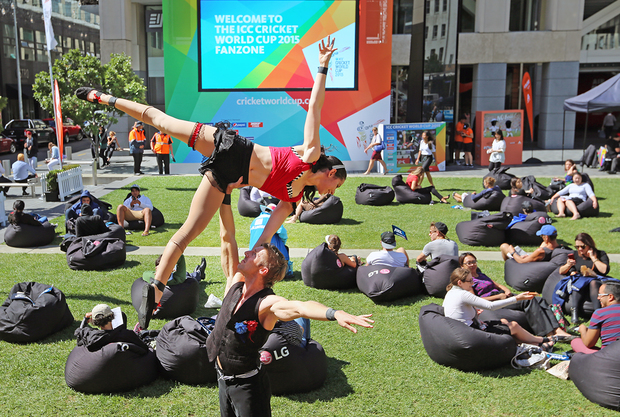 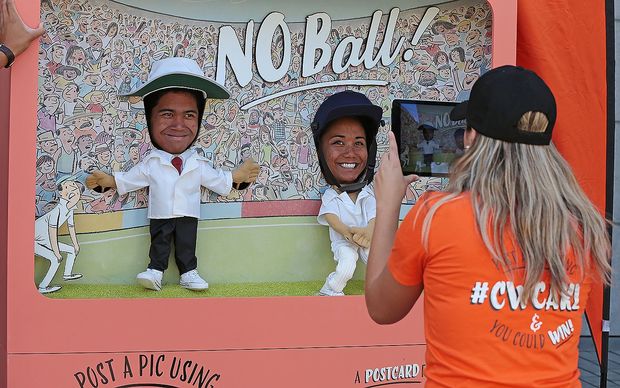 The final New Zealand-held Cricket World Cup match is almost sold out, and the clearing weather will be a relief for Auckland flatmates and cricket fans, Matt Hopkinson and Matt Pike, who spent last night at home saving their energy for the game.

They spent the evening reliving Daniel Vettori's one-handed catch against the West Indies, with hopes the Black Caps will pull off some magic again today.

Matt bought a ticket for the game last year, not knowing who would be playing, and his mother is flying up from Wellington to join him at Eden Park. 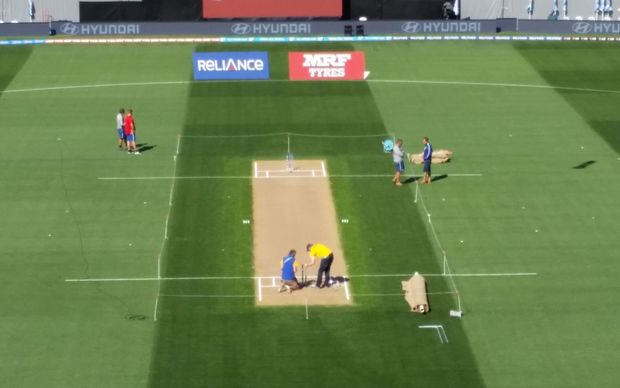 "I booked the tickets just over a year ago before I was living in Auckland. Just with the hope that New Zealand might make the semi and I thought I'd find someone to go with.

"That's where Mum came in, she was more than happy to take up that second ticket."

Good mates Steve and Stuart had a quiet one at their local before tomorrow.

Steve is self-employed, so he's giving himself the day off to go to the match. Stuart is not.

"No, I won't be allowed to watch it at work. But after work I will definitely be watching. I'd like to see a decent run-out." 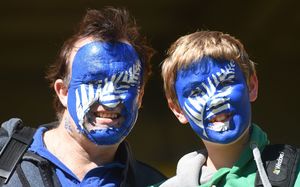 Fans at the Black Caps quarter final against the West Indies in Wellington on Saturday. Photo: PHOTOSPORT

Auckland's Employers and Manufacturers Association said most businesses know today is a special day, and chief executive Kim Campbell thinks they're likely to be pretty lenient with staff distracted by the game.

"I think most employers recognise it's a really important day for New Zealand, and if they can, they'll set up a TV in the lunchroom."

But Mr Campbell warned workers not to skip out on their job.

"If somebody doesn't attempt to be at work and goes to the pub to watch it, they better make sure they've had a conversation with their employer beforehand.

"You can't expect people to not show up and expect sympathy afterwards."

Auckland Transport expects about 20,000 to 30,000 fans will get to Eden Park by taking one of the special public transport options it has put on for the game.

Operations manager for special events Logan Christian reminded fans that travel on trains and buses was free with a ticket to the match.

"People can walk, people can ride their bikes, you can actually drive if you want, but parking really isn't an option close to the ground because there are some restrictions in place."

Police Operational Commander for the Cricket World Cup, Inspector Peter Gibson, said officers will be keeping a close eye on things, to make sure everyone stayed safe and had a good time.

"I'm picking that it'll be a positive day for everyone but I'm also actually encouraging all fans to have a positive outlook regardless who wins, because at the end of the day it is just a game."

For those without tickets, the official fan zone in downtown Britomart was opening at 11am.