Tenants say they are concerned the Government's plan to sell state houses will allow the private sector to muscle in and force vulnerable people out of their homes.

The Government plans to sell up to 2000 state houses to community housing providers over the next year as part of its plan to increase the number of houses available.

It said the plan will make more use of community housing providers by selling Housing New Zealand stock and increasing the number of income-related rent subsidies.

Wellington resident Susie MacDonald said she lived in state housing for the first 14 years of her life followed by six years in council housing.

She said social housing helped her and her family in a time of need and she is worried about potential private buyers, despite assurances from the government that houses will be sold to registered providers.

Ms MacDonald said there was a risk that rent prices set by non-government organisations could drive more people to ask for government handouts. 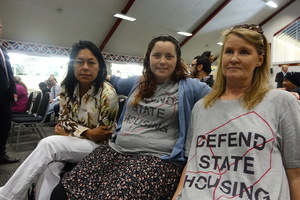 "The accommodation supplements do not cover the high cost of private rentals: in that case, many of these people will be forced, if they know that they are eligible, to apply for temporary supports through Work and Income and that will then raise costs for the taxpayer."

The Government said about 3000 Housing New Zealand tenants are already paying market rent and could be moved into privately owned dwellings.

But Zelna Brinton, who has lived in Wellington for over eight years, said tenants are worried about where they'll be moved to.

Director of Community Housing Aotearoa Scott Figenshow said the Government's focus needs to move towards the effect the sales will have on communities.

"We still seem to be stuck in a discussion about, is the price of the transaction one that works for government?"

"Those houses are sitting on land in communities. Communities want to see that land well used and the community providers have some strong and positive ideas for how they can deliver better housing outcomes on that land. But that's a discussion about community outcomes, not a discussion about paying Government a price for houses."

Finance Minister Bill English Bill English spoke in Wellington yesterday at the last of a series of public meetings arranged by the Government to explain the policy.

He said the plan will help move people who are ready out of social housing while still providing ongoing support to those who need it.