Police and officials from the Ministry for Primary Industries will visit every dairy in the country over the next two weeks to check security for baby formula on sale. 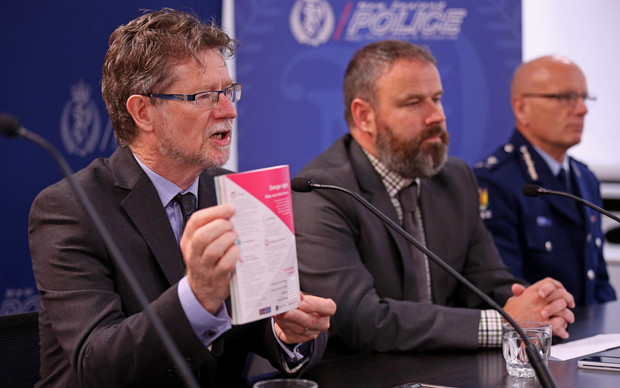 At a media conference in Wellington on the threat to poison infant formula, Deputy Police Commissioner Mike Clement said they are pleased with the response so far from larger retailers.

But he said they aim to cover all the places where baby formula is sold, and that included dairies.

Mr Clement expected it would take about two weeks to check all the shops. 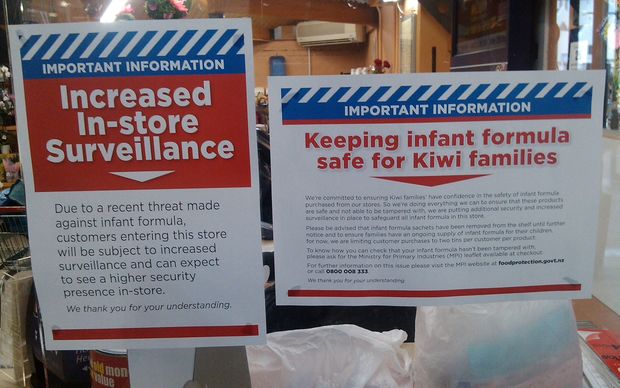 Signs at a a New World supermarket in Thorndon, Wellington, on Wednesday. Photo: RNZ / Kent Atkinson

Authorities want to ensure all consumers have the same advice and protection, regardless of where they buy formula, he said.

"We don't want it to take too long, obviously, because the sooner we reach all purchasers of the product and all retailers, the more confident we will be that everybody is being vigilant."

Dr Pat Tuohy from the Ministry of Health reiterated the baby formula was as safe now as it was before the threats.

Dr Tuohy said calls to Healthline had halved in the past 24 hours while Plunketline got not one call about 1080 last night.

"The probability that any really sick child is going to be poisoned with 1080 is remote," he said.

"But we see in our paediatric wards and paediatric intensive care units sick children with a whole lot of other conditions such as meningitis and pneumonia which are treatable and able to be managed if identified early."

He said any parent who was giving their child formula and was worried about it should seek medical advice.

The threat - to contaminate milk products unless 1080 poison drops stop by the end of March - was made four months ago but made public only on Tuesday.

The Ministry for Primary Industries, meanwhile, said Chinese authorities it had spoken to overnight were unaware of any blocks or restrictions on infant formula products, despite reports from some exporters of delays.

Deputy director general Scott Gallacher said the ministry was working with exporters who may be experiencing delays.

Mr Gallacher said MPI was also working with Chinese authorities to ascertain what they would like to happen with exports, and authorities there had advised the ministry that they were not aware of any consignments delayed as a result of the blackmail threat.

Mr Gallacher urged any exporters having difficulty with any markets, to get in touch with the ministry.