A police officer tasked with making sure Mark Lundy's impounded car was securely locked up 15 years ago yesterday found herself questioned about what she was wearing when she did so. 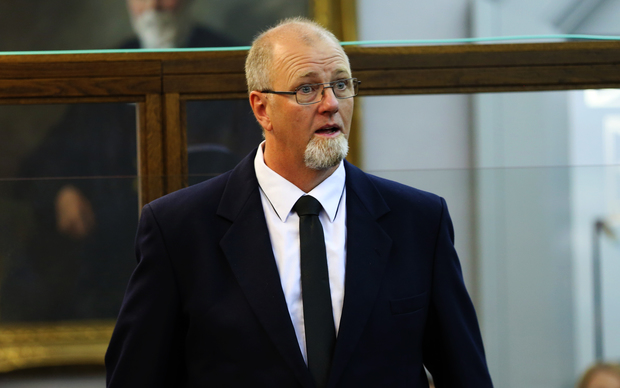 Mr Lundy, 56, has pleaded not guilty to murdering his wife and daughter, Christine, 38, and Amber Lundy, whose bodies were found in their Palmerston North home on 30 August 2000.

His retrial, before Justice Simon France and a jury of seven men and five women, is in its second week in the High Court in Wellington.

Key points from day nine of the trial

Marie Lamberth, who was a police constable in 2000 but has since left the force, yesterday said she and another officer were asked to secure the vehicle after it had been seized as Mr Lundy drove back into Palmerston North on 30 August 2000.

They supervised it being winched on to a tow truck, taken to a lockup garage at the police station and put into the garage after a "push-pull exercise" between the two; neither sat in the car, Ms Lamberth's colleague leaning in to release the landbrake, take it out of park and steer it.

Defence lawyer David Hislop asked Ms Lamberth whether she was wearing the same uniform she had been when she helped transport Mrs Lundy's brother, Glenn Weggery, from the Lundy house to the police station earlier that day.

Mr Weggery gave evidence on day two of the trial, telling how he had found the bodies of his niece and sister; the defence put it to him that he killed them - which he angrily denied.

Ms Lamberth yesterday confirmed she was wearing the same uniform during both 30 August tasks, that she had sat in the back seat of the police car next to Mr Weggery, and that he was in his street clothes.

"He hadn't, to your knowledge, taken any of his clothes off that he had been wearing earlier in the day?" Mr Hislop asked.

"No. He was in his clothes, not a boiler suit," Ms Lamberth said.

The Crown contends Mr Lundy's car mileage and an empty petrol tank showed a "secret trip" - a round trip to Palmerston North to kill his family.

However, Mr Lundy had travelled known distances of only 847km during that eight days, leaving 423km unaccounted for, Ms Ellwood said.

But defence lawyer Julie-Anne Kincade dismissed the analysis as "meaningless", saying it failed to take into account Mr Lundy's movements around New Plymouth and Palmerston North for five of those nine days.

Ms Ellwood disagreed, saying almost a third of the travel was unaccounted for, "so it's still not explicable, 423km".