A New Zealand Archbishop has received his cardinal's hat from the Pope. 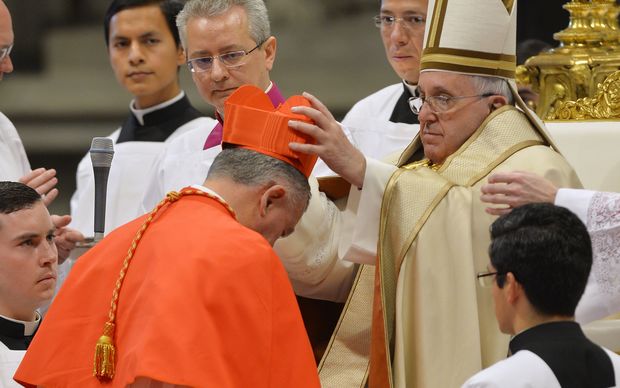 John Dew (L), archbishop of Wellington, New Zealand, is elevated to the rank of Cardinal by Pope Francis. Photo: AFP

The Catholic Archbishop of Wellington, John Dew, alongside 19 others, has been inducted by Pope Francis in a ceremony at Saint Peter's Basilica in the Vatican.

He was the first New Zealander to become a cardinal since 2005, and had previously said he was honoured and humbled by the appointment.

Cardinal Dew joined an elite group who will have voting rights on the pope's successor.

The latest appointments, which also included Tonga's Bishop Soane Patita Paini Mafi, were part of the Pope's efforts to reform the leadership of the Church, and to elevate priests from some of the world's poorer countries.