A Wellington man has been bestowed with France's highest honour in recognition of his service in World War II. 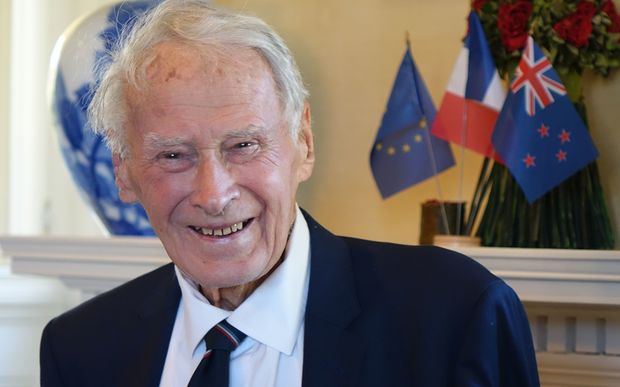 Receiving the medal of the Knight of the Legion of Honour with his family and friends at the French Residence in Wellington, Sir Penwill Moore, 94, said his first encounter with the French in 1944 was not as welcoming.

"It was thought that if the allies landed in the vicinity of Algiers, the local people, the French there would come over to the side of the allies, however it didn't turn out that way," he said.

"As we approached the gate, the French at that time didn't oblige and they opened fire on us."

Mr Moore joined the Royal New Zealand Navy in 1941 and was involved in many missions in the Atlantic, Iceland, Russia and the Mediterranean.

But it was his efforts in 1944 as navigational officer, responsible for all navigation instruments of the crafts destined for Juno Beach on D-Day, that earned him France's highest decoration - the legion of honour established in 1802 by Napoléon Bonaparte.

Presenting the award 73 years later the French Ambassador to New Zealand, Laurent Contini gave Mr Moore a more cordial reception, thanking him for his contribution to the liberation of France. 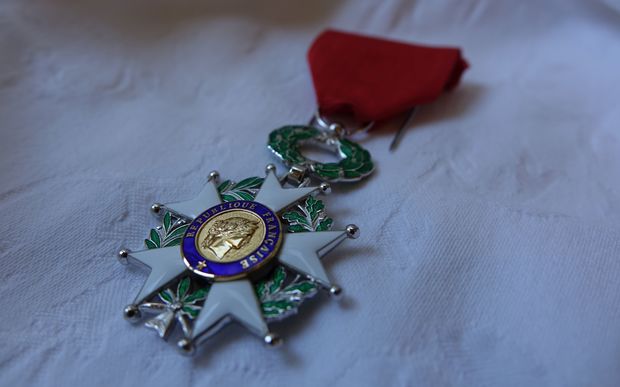 The medal of the Knight of the Legion of Honour. Photo: RNZ / Daniela Maoate-Cox

"Throughout your military service, your extraordinary professionalism and exceptional skills for navigation were remarkable. I would like to thank you personally and in the name of France for your distinguished services to my country."

The ceremony was filled with laughter and cheering - a far cry from the sound of the war that Mr Moore said he will never forget.

"They had sort of layers of ships off the Normandy coast, and the battle ships and the rocket ships were right out and they were firing over the top, the noise was incredible."

Mr Moore's 20-year-old grandson James De Lisle said it was difficult to imagine what it must have been like.

"He was navigating 100 ships into Juno Beach which is substantial and it's quite amazing. I couldn't imagine myself now going to war and taking shells around us and boats sinking. It's pretty serious stuff."

Mr Moore's son, Pen Moore Jr, said it was important that younger generations are reminded of the past through commemorative acts like the legion of honour ceremony.

"They have no real first hand understanding of what it's like and so the only way we can keep the horrors of war in the forefront of our minds is through stories and historical records. It is at our own peril that we choose to ignore the stories of the past."

Like many returned servicemen, Mr Moore did not talk about the war for many years but he said people today were curious and he was more willing to share his story.