The national cycleway initiative is attracting high-spending cyclists, and that is helping struggling provincial towns and regions, tourism operators say. 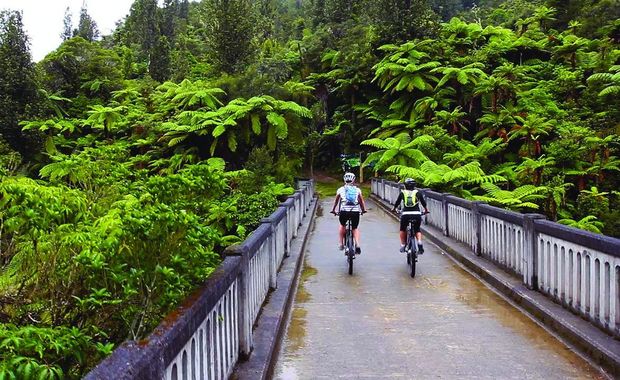 A section of the Mountains to Sea cycle trail, which runs from Mt Ruapehu to Whanganui. Photo: http://www.mountainstosea.co.nz/

Darren Gamble at Mountain Bike Station in Ohakune says the town used to be dead in the summer.

He says that has changed.

"The common phrase was Ohakune, that's just a winter place isn't it? And now that's completely shifted to Ohakune's a great place to come in summer," he says.

Mr Gamble says the national cycleway initiative has been the catalyst, with the 'Mountains to Sea' cycle trail helping create jobs in the central North Island.

Mr Gamble says he has been busier and has taken on more people to help with his cycling, backpacker and skiing businesses, while Ohakune's motels, he says, are fuller and new cafes are opening.

"Now we don't have that stress of a bad winter [wondering] how are we going to survive through to the next winter? We don't have to do that anymore."

Mike Neilson owns and operates Lake Ohau Lodge near Twizel in the South Island, and is experiencing a similar boom.

While the area is known for its ski fields, Mr Neilson says the 'Alps 2 Ocean Cycle Track' is also attracting tourists.

And he expects the current season to get better.

"We found last year the busiest months really were towards the end of the summer in March and April, so it's looking strong," he says.

Cycle tourism is lucrative, as cyclists tend to stay longer and spend more.

While industry figures indicate only 4 percent of international visitors do some sort of cycling, they spend $3800 during their time here compared with the average $2500.

A fifth of those cycling spend more than $5500.

New Zealand Cycle Trails manager Evan Freshwater says, with the average age of cyclists being around 50, it is not just a fad.

"The baby boomers are looking for things to do to keep themselves fit, that are possibly less impact than going tramping is on joints that are starting to get a little eroded and worn down. So cycling's a fantastic activity," he says.

The early evidence points toward regions benefiting from the cycleway, but Mr Freshwater says some small local authorities may struggle to take advantage of the opportunities it brings.

"I was up in Opotiki recently. You're asking that council to take from what is a fairly small budget to spend on some fairly big ticket items to build these cycleways, to improve the cycleways and that's a constant struggle," he says.

With the dollar continuing to fall, local tourist operators will be hoping that potential cycling visitors will choose New Zealand in even greater numbers.