New Zealand is on target to become the fattest nation on earth within five years, according to a weight loss surgeon.

Steven Kelly, whose editorial appears in The New Zealand Medical Journal today, said stomach stapling operations were effective and saved money in the long run but the Government was not providing enough of the life-saving procedures. 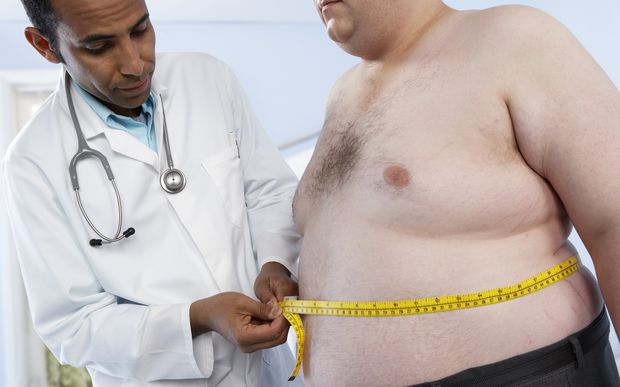 The Canterbury bariatric surgeon said on current trends, New Zealand was about to overtake the United States and Mexico to become the world's fattest nation.

"America, which is currently the fattest, has actually been stable in terms of obesity rates for the last ten years whereas ours continues to grow at one percent a year."

Mr Kelly said there were just 400 publicly funded stomach stapling operations in New Zealand last year - less than half of the number recommended six years ago.

That was despite the fact the operations, which cost about $20,000 each, saved the health system money long term.

"It's the only operation that you can do that saves you money, so in my mind, it's a no-brainer."

Anne Jowett had weight-loss surgery at Wellington Hospital in mid 2013, when she weighed 154kg and had developed diabetes.

She said her weight was now down to 112kg and she no longer needed diabetes medication.

"My health has just improved unbelievably my liver function is good, my kidneys are good and my blood pressure is perfect."

Mrs Jowett said she had tried dieting first, but it failed - partly because the diabetes medications made her hungry.

"I think because the bariatric surgery basically turned off the diabetes ... my metabolism fell into place. No other diet can do that - nothing else can do that."

Health Minister Jonathan Coleman said the Government's focus would remain on preventing obesity rather than trying to keep up with the demand for weight-loss surgery.

He said the procedures were available for those most in need but there would always be more demand than that.

"We are never going to be able to do enough surgery to keep up with demand for bariatric surgery, so you know I'm really interested in long term solutions to the problem."

Mr Coleman said the Government's wanted to focus on children and preventing them from becoming overweight in the first place.

Over the past four years, the Government has topped up hospital budgets by $8 million to boost stomach stapling for the morbidly obese.

It added a further $10 million in the last Budget, to help provide at least 480 operations over the next four years.

"We need people to be made aware of obesity and its causes and how they can prevent it.

"But we have a whole generation that have that problem now that the only treatment unfortunately is surgery.

"We don't have a medical treatment that will lead to sustained weight loss."

Dr Toomath, also spokesperson for lobby group Fight the Obesity Epidemic, told Morning Report she saw patients in hospital who had medical problems "on a par with people with cancer" and needed the surgery years ago.

She said fat-shaming did not help morbidly obese people lose weight - but more gastric surgery would. Dr Toomath said not enough publicly funded surgery was being done to help those most at risk.

Responding to an editorial in the Medical Journal, Dr Toomath said the argument that very overweight people needed to take personal responsibility for losing weight did not wash.

She has long been an advocate of social measures aimed at preventing obesity but said by the time people are morbidly obese - that is with a body mass index of more than 40 - going on a diet was often not enough.

And for most people, she said, an operation was a difficult last resort.

Dr Toomath said those with serious health problems should be demanding the surgery but were often too ashamed to.

However, an anti-obesity campaigner, Professor Boyd Swinburn, said funding more operations should not come at expense of programmes aimed at preventing obesity.

"I would like to see a lot more emphasis on prevention ... part of that comprehensive plan could well be an increase in bariatric surgery, but let's look at that in the total context of what we're going to do about obesity."

She said the Ministry did not impose a limit on the number of stomach stapling operations a health board could carry out but it was up to health boards to decide how to spend their elective surgery budget.

"Locally, DHBs work to understand their community/population needs, and align funding and services to best match these."

She said the number of operations would increase as DHBs lifted capacity.