Auckland taxi drivers say they are just scraping by with online apps on the scene taking their business, and they want the Government to get tough on how they operate.

The Government announced a review of rules for taxis and private hire car services earlier this week, to make sure it adequately covered the use of new technologies.

Mohd Khalil said he had worked as a taxi driver for more than a decade, and it had never been so hard.

Mr Khalil worked for President Taxis, which had about 50 drivers.

He said he was eager to have the Government review the rules.

"We have to do it for our bread and butter, and if [online app] Uber is coming in like that, I want the Government to look into this matter, because Uber has been spoiled in other countries too," he said.

Uber is an app that matches drivers to passengers by GPS, who then pay a fare which varies depending on supply and demand.

Mr Khalil said many Uber drivers were student drivers, and would not be allowed to get a taxi license.

He said as students, they were not up to the long hours.

"They are not safe, and they are not the guys who should be driving for the Uber company, because they are entitled to work for 20 hours," Mr Khalil said.

He said there was no chance he would consider becoming an Uber driver, because they charged about $1.45 a kilometre - and after petrol, it would not add up for him.

Another Auckland taxi driver, Amir Ahmadian, works for Co-op Taxis - the biggest taxi company in New Zealand - and said they were not feeling the pinch.

"No, I'm not worried about the future, because we will just adjust ourselves," Mr Ahmadian said.

"As a big company, it is easy to adjust ... This should happen in every business."

Mr Ahmadian said their customers wanted drivers who have had more time behind the wheel.

"Uber [drivers] need experience, and they need to figure out how they can protect people, because they are less experienced - that's their problem, but maybe they pick up young people more," he said. 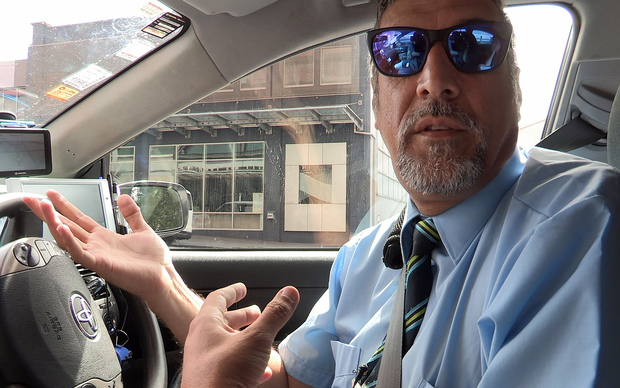 He said he had been a taxi driver for one month, working part-time for a catering company, and spending the rest of the day working for the taxi company.

He said he started using Uber to get more customers, but it did not always work out.

"By the time I called the customer, the customer was gone, because he doesn't want to wait - I lost a lot of petrol, and my time and everything," he said.

Mr Ruwangalegedera said despite the bad experience, he still used the app, and hoped business would pick up.

Associate Transport Minister Craig Foss said the distinction between taxis and hire car services needed to be clearer, as did legislation around what technology could be used to measure and set fares.

The review was due to be completed by the middle of this year.