Skyscraper-sized waves travelling for days under the ocean's surface just south of New Zealand are attracting a team of researchers from the United States and Australia.

The underwater waves, or internal tides, are responsible for distributing nutrients and regulating the temperature of the sea.

Watch the first day of the research expedition

Normally the tides move out in several horizontal directions but the Tasman internal tide which forms at the Macquarie Ridge off the coast of New Zealand is the only one known to move in a single direction, towards Tasmania.

Researchers from the T-Beam expedition are studying the phenomenon from two vessels; the Falkor, due to set out for the Macquarie Ridge on Saturday, and the Roger Revelle, based near Tasmania at the point where the giant wave hits the coast.

University of Tasmania associate professor Pete Strutton said the scientists will gather data on the biological and physical effects of the tide.

"These waves cause a lot of mixing. They're mixing warm water from the surface down and colder water from below up near the surface and this mixing is what maintains the overall temperature balance," he said.

"For more than 50 years it's been a big question in oceanography as to what makes all this mixing in the deep ocean. It's sometimes refered to as the 'missing mixing'." 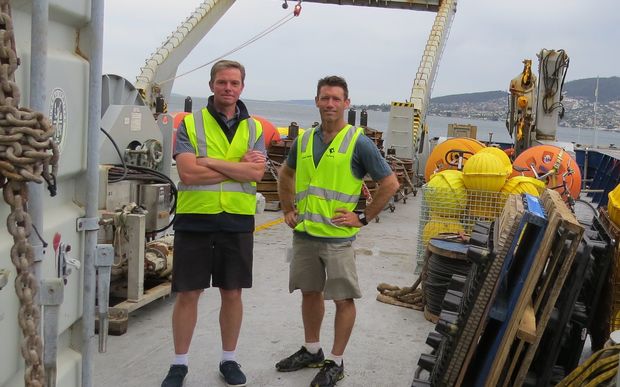 Pete Strutton (left) from the University of Tasmania’s Institute for Marine and Antarctic Studies and Matthew Alford of from the Scripps Institution of Oceanography. Photo: SUPPLIED

Professor Strutton said scientists are only just starting to learn about other mixing processes, in addition to coastal tides and wind, that are are crucial to sustaining life.

"Generally those warmer surface waters are pretty low in nutrients and the deeper waters have higher concentration of nutrients. So places where the ocean is productive is where those deep nutrients are brought to the surface and the phytoplankton can combine them with sunlight to be productive."

Phytoplankton produce about half of the oxygen in the atmosphere and their productivity is part of the reason the ocean has already consumed about a third of the carbon dioxide humans have put into the atmosphere, he said.

"I'm going to be directly measuring how productive, the plankton [are] and how much they're photosynthesising," he said.

Professor Strutton said if the tides did not exist, the mixing would be weaker, causing the ocean temperature to become imbalanced.

"The oceans have also absorbed more than 90 percent of the heat that has already been generated by global warming. So if we understand them it's important for making better climate models that can predict what happens to Earth's climate in the future."

Mr Strutton will be on board the Falkor in the Tasman Sea for a month collecting data and charting the productivity of phytoplankton against the monthly tide cycle. He said the vessel costs about $30,000 a day to run. 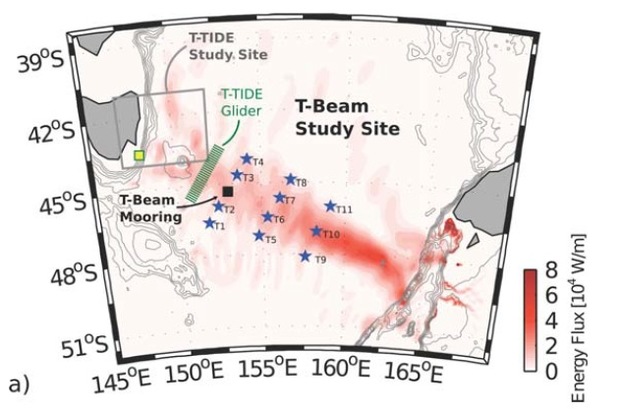 Similar research has been undertaken by New Zealand scientists in the Hauraki Gulf and off the West Coast of the South Island near Hokitika.

A physical oceanographer at the National Institute of Water and Atmospheric Research (NIWA), Craig Stevens said an expedition planned for May at the Hauraki Gulf will be operating New Zealand's first ocean glider to measure temperature and salinity.

"It's autonomous, about two metres long and we talk to it by satellite," he said. "It doesn't have an engine so it actually flies by modifying its own buoyancy."

"There will be less and less emphasis on ship based work and more on programming your fleet of autonomous robot researchers."