Scientists have discovered large waves could play a big part in the break-up of polar sea ice.

The National Institute of Water and Atmospheric Research (NIWA) the effects of waves on climate change have not previously been taken into account.

NIWA oceanographer Mike Williams and his team have found waves bigger than 3 metres can shatter ice hundreds of kilometres from the ice edge. 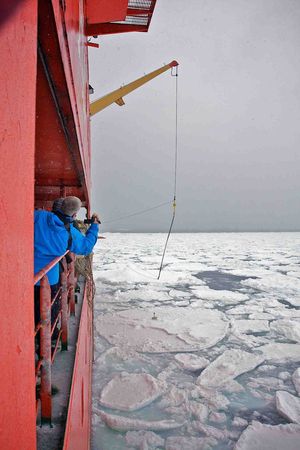 A buoy to measure waves in the Southern Ocean is lowered on to sea ice from the research vessel Aurora Australis. Photo: Rob Johnson

Dr Williams says the discovery might help explain the rapid depletion of sea ice in the Arctic and changes in sea ice around Antarctica.

The researchers say waves are expected to get bigger at the ice edges due to climate change, which might further accelerate the break up of sea ice.

That in turn could contribute to climate change by removing the ice barrier which stops heat stored around the poles being released into the atmosphere.