The manager of the Shotover Jet says while the adventure tourism industry is inherently risky operators must do what they can to mitigate danger. 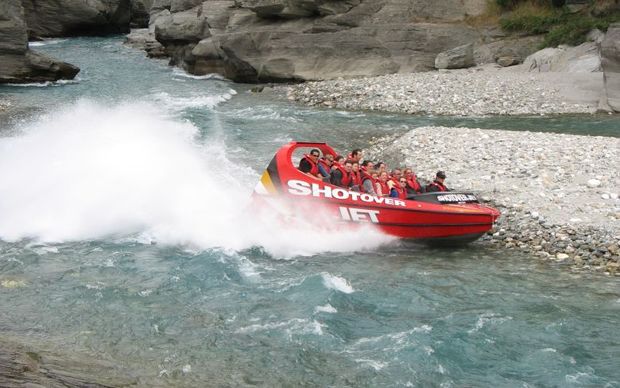 Five people were taken to hospital when the jet boat they were in hit a rock. Photo: 123RF

Clark Scott's comments came after one of the company's boats hit a rock on Queenstown's Shotover River, injuring five people, including a 12-year-old girl from Australia who remained in Southland Hospital this morning awaiting scans on her back.

"By its nature, unfortunately [it] does include an element of risk and those in the industry sort of acknowledge and sort of understand that that is the case."

While the incident highlighted the risks of adventure tourism, he said ensuring the safety of passenger and staff was the company's top priority.

"Rest assured, passenger safety and our staff safety, is our number one priority at all times and will continue to be so. If that wasn't the case we would not be in business today," he said.

Mr Scott said his company, and the industry overall, must work to minimise the risks to customers.

This included having "the most comprehensive and up-to-date safety, maintenance and training programmes".

Mr Scott, said the company was operating in accordance with international best practice, "and, hand on heart, we believe that we've got those".

The Tourism Industry Association said it would fully support the company while it investigated how the jet boat hit the rock.

Association chief executive Chris Roberts said the Shotover Jet accident was not as serious as some other incidents.

"Looking at tourism this summer i think there are far more concerning safety issues, the fact that we've had nine drownings this summer."

Mr Scott said the company, and the driver of the boat, were working with Maritime New Zealand investigators at the moment.

Mr Scott hoped the driver would be back on the water as-soon-as possible.