GNS Science says the earthquake which hit just west of Arthur's Pass yesterday, is unlikely to have had any significant impact on the Alpine Fault. 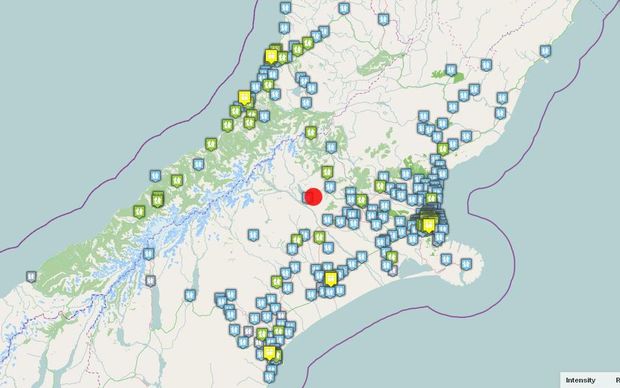 The red area on this map shows where the 6.4 earthquake struck this morning. The other markers are 'felt reports' received in the area. Photo: GeoNet

GNS seismologist John Ristau said they had been investigating whether the quake added any extra stress on the Alpine Fault, which runs about 20 kilometres from the site of the Wilberforce earthquake.

"It's not likely to be anything to be concerned about, because the actual increase is quite small. It is highly likely it hasn't changed anything in terms of the likelihood or timing of a future Alpine Fault earthquake."

The Alpine Fault runs for 600 kilometres up the spine of the Southern Alps, and has ruptured about every 300 years, with quakes of around magnitude eight.

Mr Ristau said the Alpine Fault was expected to go again within the next 30 to 50 years.

He said the Wilberforce Earthquake was also unlikely to be a sign of anything brewing in the Alpine Fault.

"It wasn't on the Alpine Fault, and this area does get earthquakes above magnitude six and above on a fairly regular basis," Mr Ristau said.

"Go back to 1994 it got a 6.7 in Arthur's Pass, and there have been others in the last century in that area which have been above magnitude six. So they are not unusual."

GNS Science released three possible scenarios with varying likelihoods, for what could happen next.

In the first scenario - which it said was very likely - over the next 30 days there would be decreasing aftershocks, and no future large earthquake.

Scenario two was described as very unlikely. Under this scenario another earthquake of around magnitude six could strike in the area.

The third scenario was that the Wilberforce sequence could trigger a quake of magnitude seven or greater, on another fault such as the Alpine Fault. GNS Science said this scenario was extremely unlikely, but possible.

Mr Ristau said it was still unknown which fault the Wilberforce earthquake was on, but it was likely it had not been mapped before.

"Unless a fault actually breaks the surface it is very difficult to find the fault, and most faults don't break the surface."

Seismologists were still building up a picture of the quake, and hope to be able to determine whether it was a new fault or connected with one which had already been mapped.

Mr Ristau said when a big earthquake hit it was well recorded on the instruments all over New Zealand, but this could also lead to initial confusion about the location and strength of the quake.

The Wilberforce quake was initially described as a 6.4 magnitude 35 kilometres north of Methven, but had now been located about one 100km further inland, and downgraded to a magnitude six.

The information about the size and location initially came in from instruments across the country, Mr Ristau said.

"But there is a very big difference in the tectonic structures in the South Island from the North Island, and so when you start throwing all the data into the mix, sometimes it can really mess up location and the magnitude."

He said to complicate things further there was also a small, magnitude two earthquake about five seconds before the magnitude six.

He said they had now determined the final location and magnitude using only data from stations in the South Island.