Boxing Day sales this year have been a bonanza for retailers, reinforcing a high-spending lead-up to Christmas.

Total sales recorded by Paymark amounted to a record-breaking $404.3 million.

The value of sales on Christmas Eve alone was up by 10.5 percent on the same day last year, while the Boxing Day increase was just under 5 percent.

Paymark head of customer relations, Mark Spicer, said the record for volume of transactions was also broken on Christmas Eve, with 4.8 million transactions during the day - 156 per second at the peak.

Sales of clothing, apparel, jewellery were up, as was revenue from hospitality. 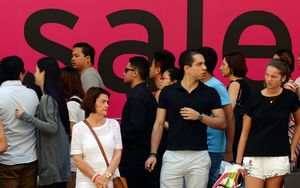 Boxing Day sales this year have been a bonanza for retailers. Photo: AAP

The country's largest mall, Westfield Sylvia Park in Auckland, was open from 7.30am yesterday with large queues forming outside stores.

Its manager, Jonathan Douglas, said the mall's 200 retailers reported it had been a particularly good Christmas season.

Mr Douglas said despite the rise in online shopping, many retailers were opening stores.

The online auction site TradeMe said unwanted Christmas gifts had led to a big surge in activity over the last two days.

TradeMe spokesperson, Jeff Hunkin, said more than 400,000 listings were made on the site between midday on Christmas Day and 3pm Boxing Day.

He said there were just over 1000 items under "unwanted Christmas presents", but he suspected other sellers were just being more subtle with their descriptions.

Some of the more bizarre listings included a greenhouse kitset with instructions written in Klingon, and a frozen three-legged chicken, being sold for charity.