Motorcyclists could be getting away with speeding because half of all mobile speed cameras point in the wrong direction to pick up their rear-mounted number plates. 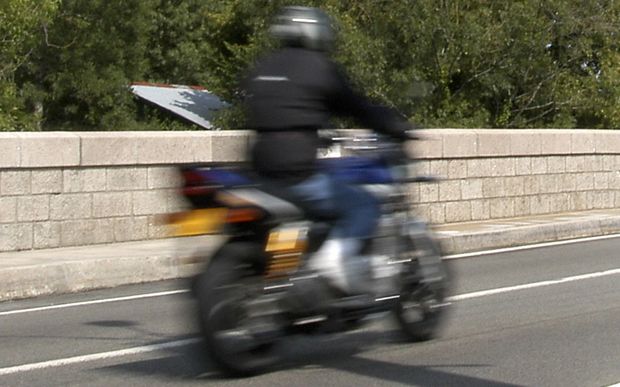 The full extent of the problem was unknown, because while police kept figures for the total number of motorists who escaped a fine because their plate could not be seen, there was no breakdown for how many of those were riding a motorbike.

Assistant police commissioner Dave Cliff said half of all mobile speed cameras were aimed so they picked up the front of a vehicle only so motorbikes - which have number plates only on the rear - were not being picked up as often as other road users.

But he said the non-sworn staff in the front of camera vans did still have an opportunity to pick up motorcyclists as they sped past them.

"That's where we ask them to record the registration number manually and then they associate it back with that photograph and then a notice is issued.

Official figures show 48,000 motorists in the year to October escaped a speeding fine, because their number plate could not be read.

Mr Cliff said working out how many of those are motorcyclists would involve changing the software used to collate the data and this would be expensive.

But he said it would be wrong to leave motorcyclists with the impression they were less likely to be caught speeding than other road users.

"Speed cameras are one method of detection and then we've got others in the form of our staff who are out there stopping people.

"But we really don't want enforcement to be the motivation. We want the fact that if you're travelling at over the speed limit on your motorcycle, you're very vulnerable, there's an awful lot of motorcyclists that are very sadly killed and injured each year."

The Dog and Lemon Guide's Clive Matthew-Wilson said it was well-known amongst motorcyclists that they did get away with speeding past speed cameras.

He did not buy police claims that they were not able to record the number not being picked up by cameras.

Chris Elles, who runs a Harley Davidson dealership in Christchurch, said while some motorcyclists choose to speed, the vast majority were law abiding citizens.

"You've got a lot of professionals, a lot of self-employed people who depend on their licences to make their livelihood.

"So I don't think you're going to see that high risk behaviour in our community. If anything, we're a small community and we need to make sure that we're not going to get on the radar and get ourselves into trouble."

Mr Matthew-Wilson said it was outrageous the police were not doing more to bring down speeds amongst motorcyclists who were 18 times more likely to be involved in a serious crash than other motorists.

"The average person who's crept a little over the speed limit in the holiday period is going to get a ticket, even though they weren't much of a risk to anybody else and were very unlikely to have an accident.

"Whereas the highest risk group roars past without getting a ticket. It's just stupidity."

He said plans by the police to introduce single cameras that captured the front and rear of vehicles would help catch more of those getting off scot-free at the moment.

Mr Cliff said it was not yet known when these cameras could be in use.