The Automobile Association says new speed cameras should be signposted to ensure that drivers slow down.

Police will install 56 new digital speed cameras over the next 18 months in high-risk locations throughout New Zealand, costing $10 million. 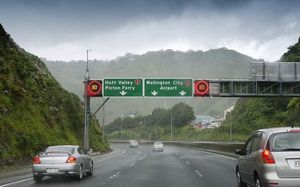 Ngauranga Gorge in Wellington is one of the locations to have new digital speed cameras installed. Photo: PHOTO NZ

Police say there are no plans to put up warning signs ahead of the cameras, but Mike Noon from the Automobile Association believes that's a mistake.

Mr Noon said if police want drivers to slow down in high-risk areas, they need to let people know the cameras are there. Otherwise, the cameras will simply issue more tickets.

But assistant police commissioner for road policing Dave Cliff said that is not the case and if drivers don't know exactly where cameras are, they are more likely to slow down everywhere.

The first 12 cameras will be installed in Auckland and Wellington, with the first to go in the capital's Ngauranga Gorge next week.

Other spots include Auckland's Great North Road in Kelston and Tamaki Drive, while in Wellington the first cameras will appear on Hutt Road and State Highway 1 near Thorndon.

There are only 12 fixed speed cameras in use at present, and they rely on film technology and sensors in the road to detect speeding vehicles. The cameras will use the latest radar-based technology and are more accurate and efficient.

Assistant Commissioner Cliff said the cameras will be placed in high-risk locations, including those where people have died or been injured in crashes involving speed. He said local communities will also be consulted.