A giant snail carrying eggs has been apprehended at Auckland airport. 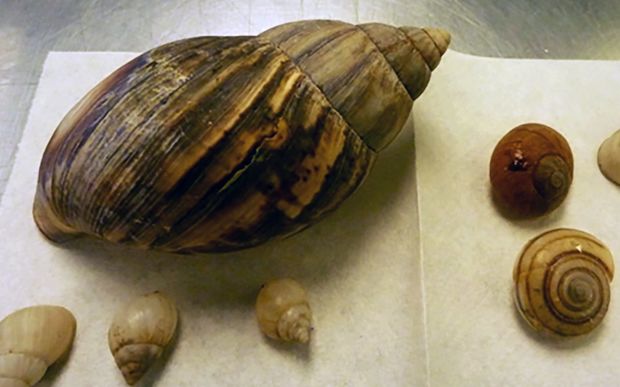 A giant snail carrying eggs has been apprehended at Auckland airport. Photo: Supplied

Biosecurity officials said the Giant African Snail, from Madagascar, would have slimed a path of destruction through New Zealand's crop and forestry industries if it had not been intercepted.

A couple returning from Africa, who had collected the snail from a forest, declared the 15cm snail to Ministry for Primary Industries staff.

MPI's Northern Border Clearance Manager, Passengers and Mail Craig Hughes said when the inspector tapped the shell, a number of eggs fell out.

"We could have had a whole family take residence in Auckland if there hadn't been border controls in place," he said.

Mr Hughes said the Giant African Snail species was a voracious feeder that has caused immense damage to forestry and crops in countries where it has established.

It was also know to carry meningitis and can eat the paint and stucco off houses.

Mr Hughes said the couple had collected the snail from a forest.

"The good thing is they declared the snail on their arrival card, thereby alerting our inspector of the biosecurity risk."

"They don't realise that the snail will often hibernate unseen at the tip of the shell and only emerge when conditions are favourable," he said.