A man found dead on a driveway in Tauranga in a possible gang-related incident walked a 500m loop around the neighbourhood while he was injured, police say. 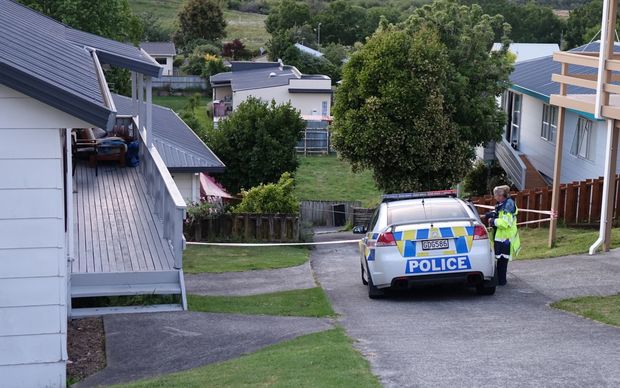 Police had cordoned off Mansfield Street where the man's body was found, but it has now been lifted. Photo: RNZ / Natalie Mankelow

Officers were called to a house in Mansfield Street house in Ohauiti about 9am on Sunday, after the body was discovered.

Detective Senior Sergeant Greg Turner said the man, 19-year-old Takena Tiepa-Ranapia, had attended a party at a house nearby the night before but they had received no calls to the gathering.

"We have followed a blood trial from the address where the disturbance was approximately 500m in a circular route that's looped around Manfield Street, and it's looped back through some parkland to a neighbouring property, where we found the body."

The police believed his death and an earlier stabbing a few kilometres away were linked, he said.

"At this stage we're still establishing who is involved, and it's too early to say," Mr Turner said.

"Indications are that the people involved do wear different colours, and that's what the neighbours are telling us."

The police wanted to hear from anyone who saw anything suspicious in the area, including the movements of a maroon four-door sedan in the Tauranga and Mount Maunganui areas between midnight and 1am on Sunday.

Police tonight arrested a man over the earlier stabbing and said a 36-year-old had been charged with wounding over the incident early yesterday morning. He would appear in the Tauranga District Court tomorrow.

A cordon was in place in Mansfield Street for most of the day on Sunday and only residents were allowed to enter the cul-de-sac.

It was lifted late on Sunday but the end of the driveway where the body was found had police tape across it and was being guarded by a police officer.

A police officer was also sitting in the driveway of a house a couple of driveways down.

A woman who lives opposite the driveway where the body was found, Karen, said she went out early on Sunday morning and could see an ambulance at the property but the police had not yet arrived.

She did not want to use her last name but said she could see blood on her friend's driveway and was told it was a crime scene.

Karen said the street had an eerie feel and kids who were usually out on the road playing had been kept inside.

John Grogan, who lives on the street, said he could see small orange cones all over the street which police were using as markers.

He said neither he nor his neighbours heard a party on the street, and it was not nice to hear there had been a death when it was so close to home.

About 30 officers were working on the homicide investigation. A post mortem was expected to be carried out today.