An investigator from outside the region has been brought in to review the police handling of a pursuit in Christchurch that ended with five people in hospital, one in a critical condition. 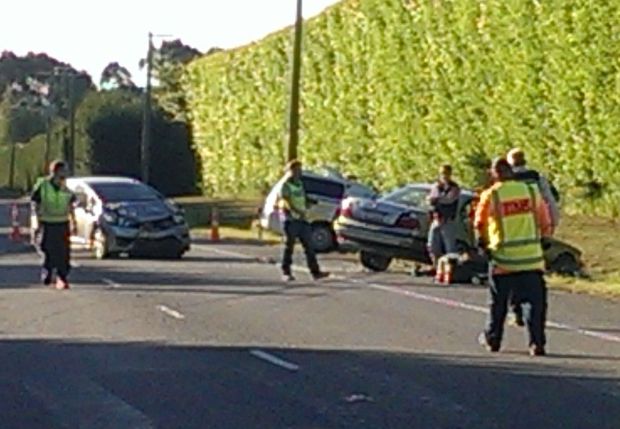 The crash happened on the busy Yaldhurst Road during rush hour about 5pm yesterday. It involved a BMW fleeing police that allegedly rammed an armed police road block before colliding head-on with a Honda carrying three elderly people.

An 80-year-old woman who was a front seat passenger in the Honda remains in a critical condition in intensive care today, while a 70-year-old woman in the back seat is in a serious condition. The elderly driver is described as stable.

The driver of the BMW, 55-year-old Graham Payne, has been remanded in custody after appearing at the Christchurch District Court today on three charges of reckless driving causing injury and one of failing to stop for police.

Two passengers in the BMW are stable and under police guard at hospital - one is being held under the Misuse of Drugs Act.

Police are not giving interviews on the chase, nor saying why the BMW was being pursued.

Dave Swain, who lives nearby, said he came across the crash scene as he arrived home from work and said it appeared that a police vehicle had been involved in the incident as well.

"The cop truck was in the ditch and the silver car was completely totalled on the same side - so it's hard to know what happened, but it was a bit of a mess."

Mr Swain said when he heard about the incident his first concern was for his three teenage sons who walk along the road where the crash happened every day.

"We didn't have a clue what was going on so the first thing I did was call the kids because it's a pretty busy road. I thought one of the kids might have been hit coming home from school."

A man living 300 metres from the crash site, who asked not to be named, said he heard the collision happen.

"It's terrible, terrible. You don't know when you're safe. I just said to my wife, you don't like to go out."

Police said the IPCA inquiry would be handled by a senior investigator from outside Canterbury and would look at practices and procedure.

Police are calling for witnesses to the incident to come forward.