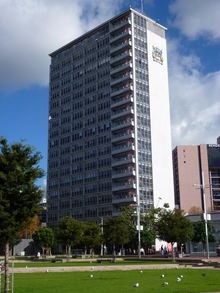 Plans for the landmark Civic Administration building have been put out for discussion.

The council has today put forward three options ranging in cost from $24 million to $78 million.

Some have described the 1950s high-rise building in the Aotea Square Precinct as an eyesore, while others consider it a heritage site that ought to be protected.

Property manager Clive Fuhr said the building was nearing crisis point in terms of how it could be used and whenever there was any major maintenance work needed, great care had to be taken to ensure the risk of asbestos spreading was minimised.

Mr Fuhr said the facade would have to be removed to get rid of the asbestos.

He said if the building was to be converted for other use, such as a hotel, it would likely cost about $60 million, while demolishing it would cost about $24 million.

Mr Fuhr said there had been some interest from private investors but mostly around turning it into apartments.

Another factor was the need for the building's heritage status to be decided.

"We have had consultant advice which suggests even a category A could be warranted, and the significance of that can then have an impact on what can actually be done to the building."

Meanwhile, the director of Regional Facilities Auckland, Robbie McCrae, has backed a restorative effort, saying it could help breathe life into the Precinct area.

"There is an area at the back and around the sides where we are looking at building studio spaces and admin spaces for companies like the Auckland Philharmonia Orchestra, the New Zealand Opera Company, and the Royal New Zealand Ballet is quite keen to have a bigger presence in Auckland," he said.

But heritage consultant Alan Matson, who is also the president of the Civic Trust Auckland, said there needed to be a proper, robust analysis to determine the building's heritage status once and for all.

"I would expect that the building would be listed in the proposed schedule of heritage buildings for the unitary plan," he said.

"I've looked in there and I can't see it in the originally notified version, so there seems to have been a blind eye turned to its heritage value at this stage."

The future of the Civic Administration building will next be discussed at a council development committee meeting in February.